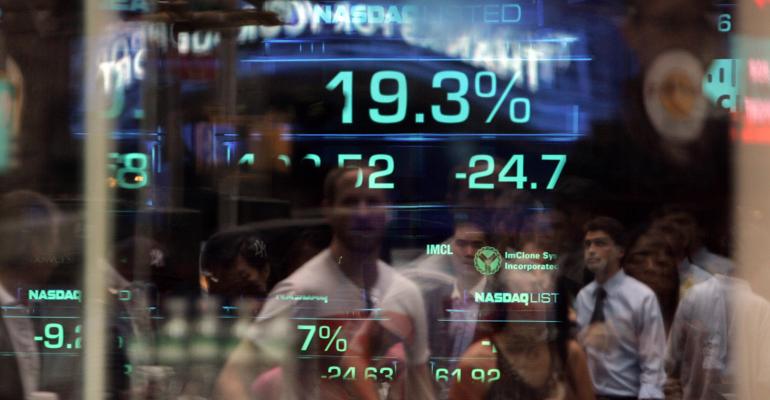 Why November Was a Massive Month for Markets Around the World

(Bloomberg) --It's been a roller coaster.

November marked one of the most decisive shifts for global financial markets in recent years, with a bevy of asset classes — from bank stocks, emerging-market bonds to hard commodities — staging sharp price swings in the space of a mere three weeks.

Investors reckon the ascent of Donald Trump presages a regime shift for the global economy, marked by trade protectionism, a stronger U.S. inflation outlook, and a higher U.S. fiscal deficit.

The anchors of global asset repricing: a stronger dollar, an increase in U.S. growth expectations, fears of a more protectionist Trump-led administration, and a steeper U.S. yield curve which brought the premium for borrowing at the long-end, relative to short-end obligations, back to positive territory.

Developed-market equities have been in vogue over the past three weeks, with a rotation out of defensive stocks in favor of consumer discretionary shares, industrial commodities, and financials underscoring how a repricing of growth expectations has trumped the prospect of a higher discount rate. Meanwhile, fixed-income has fallen firmly out of favor, stocking fears the 35-year bond bull-run is coming to an abrupt end. That signals a reversal of the perverse investment strategy in the first half of the year to snap up equities for yield, and bonds for capital gain.

November was the worst month ever for the Bloomberg Barclays Aggregate Total Return Index, which staged a 4 percent loss, as yields on U.S. 10-year Treasuries climbed from 1.8 percent to 2.4 percent in swings reminiscent of 2013's taper tantrum.

"The U.S. election result just over 3 weeks ago sparked a huge divergence across asset classes and also between developed and emerging markets," Jim Reid, Deutsche Bank AG strategist, wrote in a note to clients on Thursday. "In years to come markets may well look back at the month just passed as one of the most pivotal in recent memory."

Most asset classes were in a relatively stable trading range in the first 8 months of the year. All that changed in the month after the Trump victory.

With the prospect of regulatory relief from a Trump administration, the S&P 500 Financials Index returned 13.9 percent in November, while copper gained 18.9 percent — its best monthly gain in a decade — driven, in part, by Trump's campaign pledge to turbocharge infrastructure spending.

By contrast, emerging-market local-currency bonds had their worst month of 2016, with Latin American debt, tracked by IHS Markit, shedding 7 percent. The drop in local currencies erased returns for equity and debt investors in dollar terms. The sharp appreciation of the dollar — and associated liquidity fears for emerging markets next year — has challenged leveraged fixed-income trades that rely on cheap dollar funding, with the cost to borrow dollars in Japan rising.

In sum, November saw credit and rate markets taking a hit, while developed equity markets led the gains. "Analysts have been criticized for suggesting beforehand that a Trump victory would instigate a selloff in assets but the reality is that of the 39 global assets we cover (excluding currencies) only 11 are up in November in dollar terms (12 in local currency) with most being U.S. assets."It wasn't bad news for all emerging markets, however. Russia's benchmark Micex index of equities gained 4 percent in dollar terms, underscoring expectations of a thawing of tensions between Washington and Moscow next year.

Taking stock: credit, particularly U.S. high yield, has had a solid year thus far while November losses have crimped year-to-date gains in developed rate markets. Elsewhere, there are a flurry of interesting local stories that dominate asset returns this year, including the ongoing saga of European banks, the gilt market's struggle to recover from its October maelstrom, and the roller coaster in Brazil's Ibovespa index.

The rationale behind November's memorable, market-moving month — investors are positioning for a game-changing shift in U.S. fiscal and monetary policies — is largely backed by Wall Street strategists. A bevy of analysts this week, from Goldman Sachs Group Inc, JPMorgan Chase & Co, and Societe Generale SA, have upgraded their index forecasts for the S&P 500 over the next two years, citing the prospect of tax reform, regulatory relief and higher government spending, while downgrading their outlook for emerging markets.