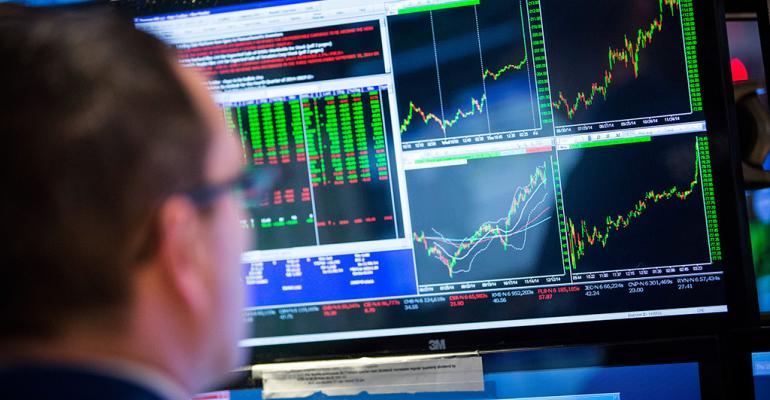 When Will It End? Traders Bloodied by Stock Wipeout Seek Clues

The breathtaking volatility that shattered the market calm has investors scrambling to make sense of it all.

(Bloomberg) --When will it finally stop?

After a jarring week that rattled financial centers from New York to Hong Kong, and wiped out almost $5 trillion from stock markets, it’s the question everyone is trying to figure out.

Despite the rebound on Friday, U.S. equities closed out their worst week in two years. The S&P 500 Index, which roared from one record to the next in recent months on strong earnings and a big corporate windfall from the Trump tax rewrite, is down almost 9 percent from its high in late January. S&P 500 futures rose 0.6 percent Monday, paring a gain that reached 1.4 percent overnight.

Whether the downdraft goes down in history as a mere hiccup, or spells the end to one of the longest bull markets in recent memory is, of course, anyone’s guess. But in just a few short days, the breathtaking volatility that shattered the market calm has investors scrambling to make sense of it all.

Across Wall Street, analysts are nearly unanimous: the U.S. economy is humming along and corporate profits look robust, so equities, regardless of the near-term correction, are a buy. Yet valuations paint a more somber picture, and one that suggests there’s still room to fall before stocks find their footing.

“There is a ‘macro floor’ -- in that the run of macro data is still strong,” said Inigo Fraser-Jenkins, who leads Sanford C. Bernstein’s global quantitative strategy team. “What we do not have is a valuation floor.”

One such indicator is called the Fed model. It compares the relative value of equities to fixed income. Going by that, the message isn’t reassuring. Even after the rout, the math shows the S&P 500 remains less attractive than it has been 82 percent of the time since the index bottomed in 2009 when compared with yields on U.S. Treasuries.

Currently, the S&P 500’s earnings yield is around 6 percent, 3.1 percentage points more than the 10-year note. The post-crisis average has been 4 points. It’s part of the reason the pain has been so pronounced.

Whatever ultimately triggered the selloff -- and just about everything from worries about inflation to forced selling by funds involved in arcane volatility trades has been implicated -- stocks were sailing along at extreme levels of optimism before it all fell apart. Sure, earnings, hiring and consumer confidence were rising -- but stock prices had risen more.

So far, the S&P 500 has tumbled in seven of the 10 past days, and plunged into a correction (loosely defined as a 10 percent drop) faster than any time since 1950. In doing so, the index has blown through three round-number milestones, as well as technical support levels indicated by its 50-, 100- and (briefly) 200-day moving averages. The sheer speed of the selloff has challenged the buy-the-dip advice offered by firms from JPMorgan to Goldman Sachs.

There’s no obvious reason to assume one correction will be like another. But judging by recent experience, this one may have further to go.

At 16.8 times forecast earnings, the S&P 500’s valuation multiple is now down from a high of 20 in late December. That’s one of the fastest declines since 2009, but it has yet to bring P/Es in line with the average ratio of 15.5 that marked the bottom of the last two corrections. To get there, the S&P 500 would have to fall to 2,417. That’s roughly 8 percent below Friday’s closing level. To Barry Bannister, chief equity strategist at Stifel Nicolaus & Co., the haywire market is a product of investors repricing the risks of higher bond yields and inflation. Those have largely been missing in the past nine years, which let the S&P 500’s valuation reach levels not seen since the dot-com bubble.

Now that 10-year Treasury yields have started to rise, equity P/E ratios need to come down to stay attractive.

“The entire edifice of the central bank bubble is built on repressed bond yields and artificially low cost of capital with a government race to the bottom for global corporate tax rates, all of which has inflated EPS and artificially supported P/E,” he said. “That is early in the process of ending.”

Stocks still look cheap to Treasuries when viewed from a wider lens. The current yield spread is more than double the average since 1990 and compares with 2.66 percentage points since 2000. But a rise in 10-year yields to just 3.65 percent (from about 2.85 percent now) would reduce the equity advantage to the 20-year average. Other indicators also suggest stocks offer decent value. Thanks to analyst earnings upgrades, a measure known as the PEG ratio -- which takes into account future growth -- just fell below its historic average for the first time since 2012, according to Yardeni Research data that goes back to 1985.

That’s not enough to convince James Investment Research’s Brian Culpepper to warm up to stocks. His funds have been cutting holdings this year.

“Stocks are extremely expensive,” he said.