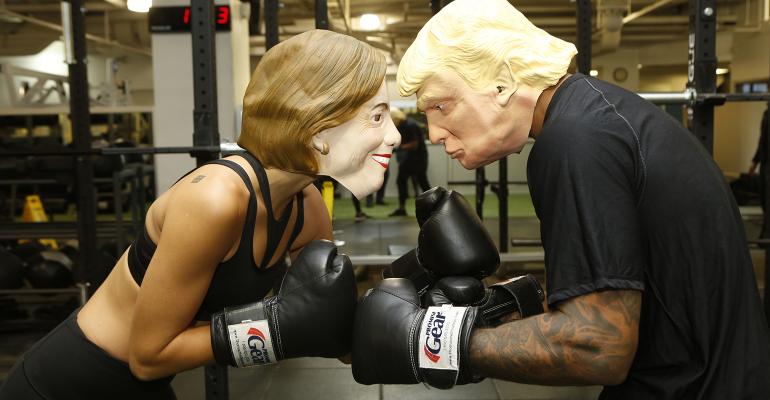 What type of outcome does Wall Street really want this election cycle? Political gridlock, says a Beacon Trust report, which looks at the investment implications of election 2016. If neither political party gains power over the other, no major legislative action will take place in a stalemated Washington and markets will be free from interventionist forces. The report also highlights that no matter who wins the presidential election–Hillary Clinton or Donald Trump–infrastructure and the financial sector should see booms, while corporate America, in general, should reap benefits from a tax holiday supported by both candidates. Two areas to look out for, though, are the energy and healthcare sectors, says the report, as the candidates have widely differing views on related political issues–with Clinton supporting green energy sources and modifying the Affordable Care Act and Trump supporting conventional energy sources and repealing ACA. Want to watch the election like a wirehouse trader? Goldman Sachs analyst Alec Phillips produced a detailed, hour-by-hour table charting predictions, odds, when states close their polling and even when decisions are likely to be announced. Phillips also notes a new gap between prediction markets and polls, which could be created by the FBI ending its investigation of Clinton’s emails, and early voting results in key states. The guide concludes a win for Clinton over Trump, a slight Democratic majority in the Senate, and Republicans maintaining control of the House.

The Chinese Are Coming High-net-worth investors in China are increasingly making investments in the United States, especially in real estate in Los Angeles, San Francisco and Seattle, according to Luxury Daily. About 60 percent of HNW Chinese consumers are expected to purchase real estate in the next three years, a new Hurun Institute white paper states. The U.S. is the top spot, according to Rupert Hoogewerf, chairman and chief researcher of the Hurun Report, because of concerns about China's currency depreciating against the dollar. Worldwide, England and Canada join the United States as the top nations likely to see a a surge of HNW Chinese immigrants, with Australia, Singapore and Ireland on the rise. And while real estate is the top investment of choice, others are also popular with the affluent Chinese, notably paintings, watches, stamps, wine and vintage cars.