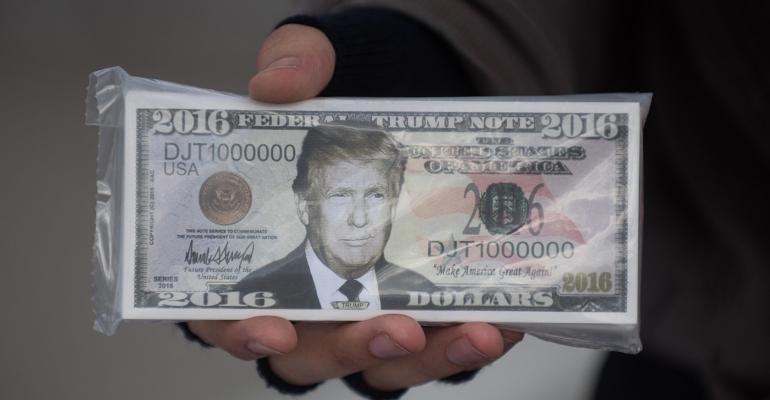 What Trump Means for Personal Finances

Investors should avoid knee-jerk changes to their portfolios post-election, predictions for the CRE market, and Securities America teams with Jefferson National for DOL compliance.

Online advice provider Personal Capital says investors should not make knee-jerk, emotional changes to their portfolios based on the election, but, rather, they should look to certain financial planning strategies given Donald Trump’s policies on taxes, Social Security, education and health care. "The next president doesn't have a true impact on market performance long-term,” said Bill Harris, CEO of Personal Capital. In its 2016 election report, the company looks at the short-term and long-term market impact of presidential elections. (Short-term, stocks tend to fare much better in the first year of a new term when a Democrat takes office.) The report delves into Trump’s policy plans in certain areas, and suggests financial planning strategies for each of those areas. For example, for tax planning, investors should use tax-loss harvesting, tax allocation and tax-efficient securities. “Americans are conscious of how the newly elected president will impact their day-to-day finances, but during times of uncertainty it is more important than ever to build and stick to a long-term financial plan," said Craig Birk, executive vice president of portfolio management at Personal Capital. The commercial real estate industry has long been a major force in politics, but the election of real estate developer Donald Trump as President of the United States brings that relationship to new heights, writes NREIOnline.com. The sister website to WealthManagement.com predicts that a Trump presidency increases the likelihood of a recession, decreases the chances of a rate hike in December, brings volatility into a CMBS (commercial mortgage-backed securities) market that hates uncertainty, and may push developers to delay or abandon new projects. It also could lead to foreign investors expediting deals in the U.S. before the new president creates barriers to foreign investment; it may increase long-term bond deals because of higher budget deficits; and it could also push primary markets back in favor. Broker/dealers continue to make adjustments to the investment products they offer in order comply with the impending fiduciary standard from the Department of Labor. Securities America is the latest firm to partner with Jefferson National to make available its Monument Advisory flat-fee investment-only variably annuity product to the b/d's 2,000 independent advisors. Mitchell Caplan, the CEO of Jefferson National, said the company had already partnered with several sister firms like Triad Advisors and KMS (all with the same parent company, Ladenburg Thalmann), so it was a natural progression to work with Securities America. He added that because nearly half of Securities America’s advisors are fee-based, the company is well positioned to sell Jefferson National’s products.