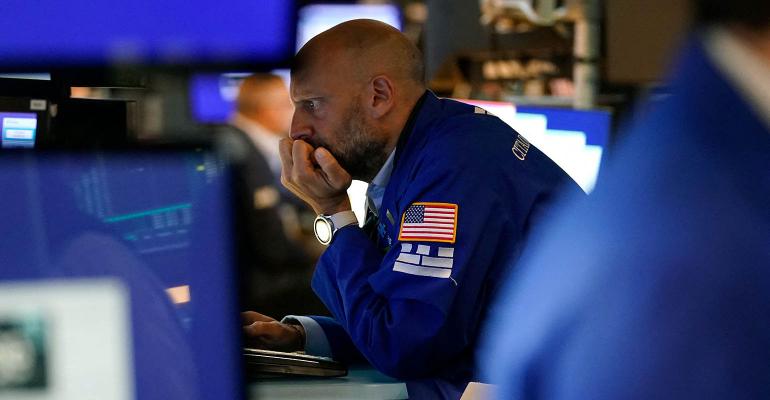 Humbled prognosticators, shaken advisers and stressed money managers weigh the lessons learned as they brace for the second half of the year.

(Bloomberg) -- In early January, the outlook for the next 12 months looked pretty rosy to Wall Street, with some predicting that the S&P 500 Index would reach 5,500 by year’s end. But 2022 had other plans.

The Federal Reserve began showing greater urgency in dealing with inflation. Russia invaded Ukraine, which sent oil and grain prices skyward. Megacap tech shares crumpled as earnings began to disappoint, and growing fears of recession weighed heavily on stocks and bonds. Longtime bears began to see nothing but bad news, and the two-year bull market finally ended June 13. The pain has continued, with the S&P 500 closing on Friday at 3,674, down 23% on the year.

Humbled prognosticators, shaken advisers and stressed money managers alike are now weighing the lessons learned as they brace for the second half of the year. Here’s what they’re saying:

“I expected inflation to moderate significantly. There were quite a few market-watchers who probably had the same thing. When Russia invaded Ukraine, they thought it was just going to be in the Donbas region, chip away like they did with Crimea. Everyone thought that was going to be the case, like, ‘alright, we’re going to throw some sanctions on you, be a thorn in your side,’ than all-out and complete across-the-board sanctions. Even when I realized it was going to escalate into an armed conflict, I never thought it would escalate to the entire country and dragging on for this long. And that’s why I thought inflation would be transitory,” he said. “That changed the inflation outlook for everyone because pretty much everyone also realized how important Ukraine and Russia are to the commodity supply for the global economy.”

“We started off this year with the theme of downshifting. In January, it was very clear that the Fed was going to step on the brakes, that growth was going to slow, that markets are going to be choppy. That’s the classic business cycle at work. The surprise is the speed with which all of this has happened. In retrospect, I shouldn’t have been surprised. The cycle in 2020, 2021 has been on fast-forward. Everything has happened so much more quickly than what you typically see in a market cycle. So the unwinding of that, in retrospect, makes sense. It would also happen very quickly. Now you have the addition of war in Ukraine, which certainly complicated the picture a lot.”

“The inflation is what has surprised us. We didn’t really expect it. It has stayed hotter. And it is bleeding over into consumer spending now. Consumer confidence has really gotten very weak and so it increases the risk of an economic slowdown. So I think that’s what’s really changed for us.”

“I was surprised, in the first quarter, that large-cap margins had expanded sequentially. To be fair, it was very qualified with the expectation that it wouldn’t be repeated. A lot of companies were citing the same supply-chain issues, margin pressures, inflation biting into their bottom lines. But they were still, overall, on an average basis able to grow that margin. Part of that kept a lot of people’s expectations from really being revised lower. We still believed and had that lagging evidence that corporates were still holding margins that gave us a little more confidence or comfort in equities.”

“What’s happened more in the second quarter is you’re seeing that inflation has not peaked. We’ve recognized that what corporates are reporting in the first quarter is a lagging indicator. And more and more, the tone and negativity has permeated throughout. That sentiment change, combined with the evidence that the Fed has not really grabbed the reins and really brought down firmly inflation, and of course the geopolitical issues as well -- all that together is finally hitting us hard.”

“I went out to lunch. We went to just a regular lunch place, walked in and the place is almost empty and we’re told, ‘Oh, you have to wait 45 minutes because you don’t have a reservation.’ And the problem is staffing. We’re still in a world where businesses are not back up to their 2019 runway,” she said. “And we knew it was going to be a volatile time because the US had indicated that they were going to have to raise rates,” she said, adding that a lot will depend on how China responds to its economic woes. “We’re all tied at the hip. So watching global forces, but not necessarily making every portfolio decision is important. How’s that for a lesson?”

““We have to accept that more tightening is coming than we expected earlier in the year. We recognized when the Ukraine war broke that this would be an inflationary shock, in fact, a stagflationary shock. We were hoping that it would not extend as long as it has. And moreover it’s June and we don’t have any more clarity than we had a couple of months ago as to what the exit ramp is for this. And so, amid these more persistent inflationary pressures and more aggressive rate response, we are, unsurprisingly, downgrading growth projections again.”

“Looking back, if you had sold everything at the beginning of the year and just sat in cash, yeah, you’re in a better position. But trying to time the market is always a fool’s game and just stay invested, especially if you have a longer-term outlook. I don’t think that’s changed -- I think you stay invested and you hold through it. The equity market in particular, while it’s sold off and we’re in bear territory, we’re still at fairly good valuation levels.”

“There will be opportunities to get money back to work here later this year. But it’s tough. This is a volatile situation where interest rates are going to rise, inflation seems to be really sticky right now and it’s going to be,” he said. “When you have external shocks to the market, you have to just kind of wait them out and try to control what you can control.”