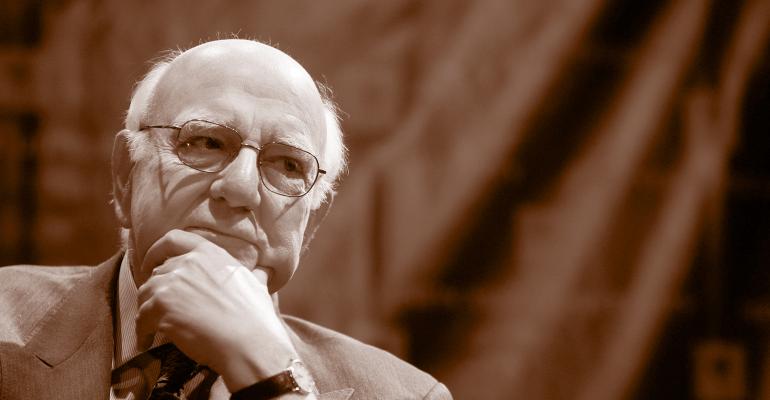 (Bloomberg) -- Around Columbus Day, 1979, Paul Volcker, newly installed as head of the Federal Reserve, embarked on the crusade that made him a legend: a no-holds-barred campaign to beat back inflation. On Wall Street, it took the better part of three years to recover.

Four decades later, the parallels abound. With inflation approaching double-digits, Jerome Powell’s Fed is engaged in its most powerful monetary tightening campaign since Volcker’s time, raising rates in chunks as stocks and bonds reel. History’s message for markets is a sobering one. Recoveries take time when central banks are against you.

Time -- and a strong stomach. With equities rebounding this week, investors should recall that as Volcker’s tightening began to bite in 1980, spurring a brief relaxation in its pace, the S&P 500 bounced 43% over about eight months. The gains proved short-lived, and it wasn’t until halfway through 1982 that stocks began a lasting recovery.

Powell last month alluded to his predecessor’s record of persistence, saying that policymakers “will keep at it until the job is done” -- invoking Volcker’s memoir, “Keeping at It.” Hawkish monetary messaging, combined with geopolitical risks, has forced JPMorgan Chase & Co. strategists, who’ve been calling for an equity rebound for months, to think again.

“While we remain above consensus positive, these developments are likely to introduce delays in the economic and market recovery,” JPMorgan global market strategists led by Marko Kolanovic wrote in a recent note. That’s “putting our 2022 price targets at risk and suggesting they may not be met until 2023, or when these risks ease.”

Others have an even darker outlook. The worst of the slump back in Volcker’s day was a 27% drop from late 1980 to August 1982. That’s little more than the 25% peak-to-trough decline suffered by investors at the worst point this year. What’s handicapped the modern market is valuation levels far beyond those back then.

Measured by share price against sales, the S&P 500’s valuation -- while down from its record high -- remains at levels not unlike the dot-com peak of 1999. And the implosion of the tech bubble is another reminder that it can take years for stocks to mount a sustained rebound -- the S&P 500 had three straight years of double-digit percent declines.

“We have a lot of penance to pay,” said Sam Stovall, chief investment strategist at CFRA Research. “We’re going to have to experience a bear market that probably could end up being much deeper than where we have gone already and that we could end up in a lower trajectory for stocks for the next decade.”

But what might matter most today is how long the Fed maintains higher interest rates, according to Lauren Goodwin, economist and portfolio strategist at New York Life Investments. “If we see the Fed hold those higher interest-rate levels, I believe it will be more challenging or slower for risk assets to reach their previous peaks,” she said in an interview.

The hope is the current Fed won’t have to keep at it for as long as Volcker, who -- when he launched his campaign in an announcement dubbed the “Saturday night massacre” -- was wrangling with a legacy of years of elevated inflation, with widespread expectations of that continuing.

“Volcker was dealing with a heavily entrenched wage-price spiral that he had to break,” said Quincy Krosby, chief global market strategist at LPL Financial, in an interview. “No two periods obviously are alike.”

Still, there’s no sign of any pivot away from tightening for now from the current Fed. On Tuesday, newly installed board member Philip Jefferson said reducing inflation was the central bank’s top priority, while San Francisco Fed President Mary Daly said officials must “follow through” with interest-rate hikes.

“The key question for the recovery for risk assets in this cycle is will the Fed maintain interest rates above neutral and for how long,” Goodwin said. “Or will they blink?”

--With assistance from Lu Wang.