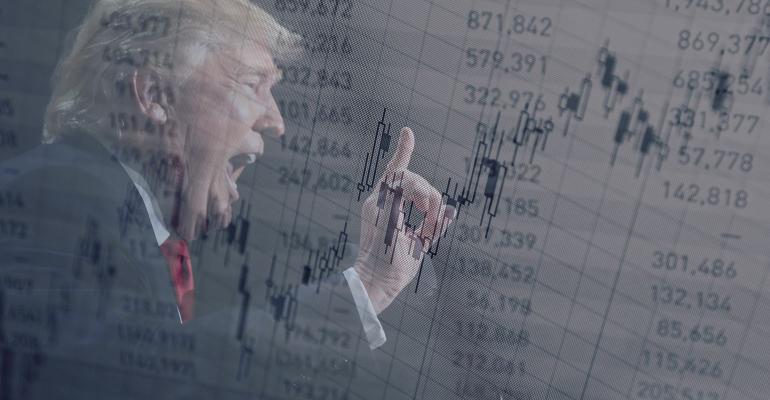 As the VIX Sinks, Fear Gauge of Different Kind Stays Near Record

President Donald Trump was expected to usher in a wave of market volatility, but from the start, the opposite has been true.

(Bloomberg) --Political turmoil in Washington has produced a reaction on Wall Street: yawns.

The Partisan Conflict Index, calculated by the Federal Reserve Bank of Philadelphia, stayed near record highs in August, while the VIX, a measure of expected stock volatility also known as the fear index, continued on its merry, upbeat way despite congressional battles over health care, taxes and a federal debt limit.

“Markets, generally, ironically, favor Congresses that don’t do anything,” said Daniel Alpert, managing partner of Westwood Capital LLC in New York. “To a certain extent they care about issues like the debt ceiling, but then there’s a boy-who-cried-wolf issue where they’ve become inured. The notion that markets and politics are correlated on a real-time basis is wrong.”

President Donald Trump was expected to usher in a wave of market volatility, but from the start, the opposite has been true. The day after his election in November, the VIX dropped about 25 percent lower than its daily average since 1990.

The VIX has been more active in the last month. The index moved more than 30 percent on Tuesday as unease builds around North Korea and as the U.S. prepares for its second major hurricane of the season. The gauge is still on track to post its lowest annual average on record. Political conflict, some of it delivered via tweet, has been building. Trump’s advocacy of corporate tax cuts make investors happy, but his inability to pass legislation and the rancor that has characterized his first months in office have pushed the Philadelphia Fed’s own fear gauge higher. The 115th Congress is on pace to enact the fewest laws in the 44 years tracked by GovTrack.us. It was in session only part of August.

The Philadelphia Fed’s index, created in June 2014 with data backfilled to 1981, tracks how often political disagreements are mentioned by a select group of major U.S. newspapers each month. The higher the value, the higher the purported level of conflict in Washington.

The turmoil promises to escalate in coming weeks, as Congress tackles a new tax regime and immigration law. The U.S. is expected to breach its debt ceiling as soon as next month, and Trump has tweeted that it might not be a bad thing to shut down the government, to get his way, rather than enact a limit.

But Dean Baker, co-director of the Center for Economic and Policy Research in Washington, said the economy isn’t about to suffer due to political battles currently raging.

“The two biggest potential problems -- a government shutdown and debt default -- may actually be less likely because of the political conflict,” Baker said. “In both cases, the Republicans know they are virtually certain to get blamed -- they do control everything -- which gives them a really strong incentive to make sure they don’t happen.”

“I reprice my financial portfolio only when the policy fundamentals change,” he said. “If it’s still in a range like we are now, when nothing happens, then I don’t reprice.”