/sites/all/themes/penton_subtheme_wealthmanagement/images/logos/footer.png
Recent
Recent
A Course Correction on Nurturing Talent and Culture
Jan 27, 2022
Multifamily Developers Try to Keep Pace with Demand
Jan 26, 2022
Ocado Unveils New, Lighter Robots in Grocery-Delivery Push
Jan 26, 2022
Nine Must Reads for the CRE Industry Today (Jan. 27, 2022)
Jan 26, 2022
Featured
The 10 Best and 10 Worst States in Which to Retire in 2021
Jul 15, 2021
Poll: 15 Classic Books on Investing and the Markets
Apr 03, 2020
25 U.S. Markets Adding the Most Multifamily Units This Year
Feb 03, 2021
Fifteen Must-Listen Business Podcasts for Advisors
Aug 14, 2020
Bloomberg
brought to you by 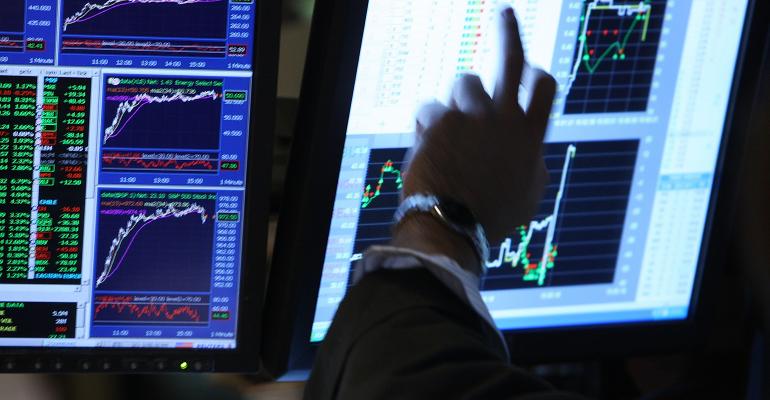 The Securities and Exchange Commission and the Commodity Futures Trading Commission have been conducting a broad review of trading since Feb. 5.

By Ben Bain and Matt Robinson

(Bloomberg) --U.S. regulators are scrutinizing this month’s implosion of investments that track stock-market turmoil, including whether wrongdoing contributed to steep losses for VIX exchange-traded products offered by Credit Suisse Group AG and other firms, several people familiar with the matter said.

The Securities and Exchange Commission and the Commodity Futures Trading Commission have been conducting a broad review of trading since Feb. 5, when volatility spiked and investors lost billions of dollars, the people said.

Among those looking into what happened are lawyers in the SEC’s enforcement division, which investigates firms for potential misconduct and fines them if it finds violations of securities laws, two of the people said. There is no indication thus far that specific companies, including Credit Suisse, are being probed.

The scrutiny puts a spotlight on a small corner of the $3.4 trillion exchange-traded fund industry that lets everyone from hedge funds to mom-and-pop investors engage in complex trading strategies. With losses now piling up, allegations of market manipulation are getting more attention and government watchdogs face questions about why small-time investors were permitted to buy such products in the first place. The investments that blew up two weeks ago move in the opposite direction of the Cboe Volatility Index -- a benchmark better known as the VIX that serves as Wall Street’s barometer of market stress. Betting the VIX would fall was for years a winning trade because volatility was close to non-existent.

After the losses, SEC officials reached out to Credit Suisse, a person with direct knowledge of the conversations said. Neither Credit Suisse nor ProShares have been accused of any wrongdoing. The regulators’ examinations are at an early stage and won’t necessarily lead to sanctions or new rules.

Spokesmen for Credit Suisse and ProShares declined to comment.

The VIX is known among traders as the fear gauge and investors often use it to hedge their bullish stock bets, as the index typically rises when shares fall.

It’s calculated from prices for S&P 500 Index options and reflects expectations for the magnitude of swings in the U.S. stock market. Wagering on the VIX has become increasingly popular in recent years, particularly after Cboe Global Markets Inc. introduced futures tied to the index more than a decade ago.

Last week, it emerged that an anonymous whistle-blower had alleged to the SEC and CFTC that “rampant manipulation” of the VIX is costing investors hundred of millions of dollars a month. Cboe, the Chicago-based exchange that controls the VIX, said the report’s conclusions lacked credibility and were “replete with inaccurate statements, misconceptions and factual errors.”

The whistle-blower’s claims, made through a Washington lawyer, follow a May report by a University of Texas professor and a Ph.D. student that asserted the process through which VIX futures are settled is subject to rigging.

Chris Concannon, Cboe’s president and chief operating officer, said Feb. 7 that he expected regulators to review some products that track VIX derivatives. Watchdogs would probably examine what information was disclosed to investors, with a particular focus on retail traders, he said on a call with analysts.

Among the issues being examined by the SEC’s enforcement division are why some exchange-traded products linked to the VIX didn’t trade as some investors expected, according to two of the people, who like others asked not to be named because the reviews are private.

On Feb. 5, the VIX posted an unprecedented 116 percent surge. A trader could’ve reasonably assumed the index would come back down the next day. And indeed it did, dropping 20 percent on Feb. 6. But if they bought Credit Suisse’s XIV or other investments that are designed to move in the opposite direction of the VIX at 4 p.m. on Feb. 5, they would have suffered losses the following day.

Outside the SEC’s enforcement unit, agency officials are taking a thorough look at products based on the VIX, including how the investments are structured, one of the people said. They are seeking to rule out manipulation as a factor in this month’s wild price swings, the person said.

The type of investments that Credit Suisse and ProShares issued are known as inverse exchange-traded products because they increase in value when some related asset falls, and vice versa. The space has grown significantly over the past decade, as such products now manage about $33.6 billion, compared with $1.7 billion in 2006, according to research company ETFGI.

Many don’t face the same rules as simpler securities that track the S&P 500 even though they often pursue more complicated investing strategies. Some utilize leverage, which can amplify investment gains but also magnify losses. BlackRock Inc., the world’s biggest provider of exchange-traded funds, has called for tougher regulations that would require financial companies to clearly spell out the risks associated with inverse products.

At the CFTC, which oversees futures contracts, regulators are reviewing VIX-related products under its jurisdiction, another person said. The Financial Industry Regulatory Authority, an industry-funded watchdog that Cboe has hired to conduct surveillance of its markets, also has increased its scrutiny of VIX trading, a person familiar with the matter said last week. The SEC, CFTC and Finra are coordinating their reviews, one of the people said.