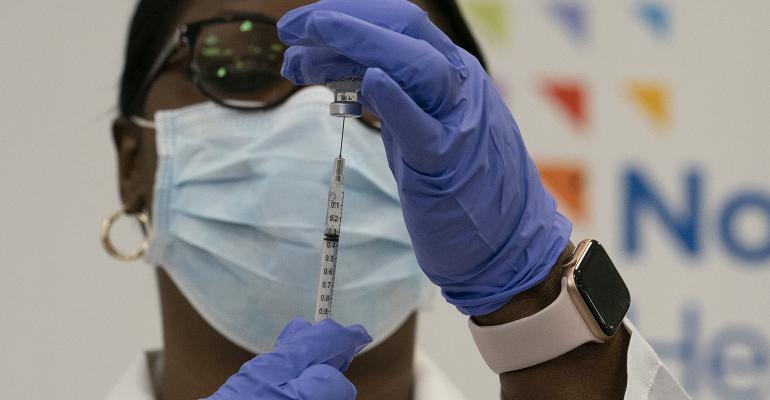 Vaccine, Fed and the Dollar Will Be Big Themes in 2021

Market analysts from Informa Financial Intelligence said cash has been slower moving off the sidelines in this crisis than the financial crisis of 2008-2009.

No one needs to tell advisers 2020 was a wild year for the markets. But with many of this year's big issues continuing into 2021—the COVID-19 pandemic, a weak economy and widespread unemployment—what exactly should advisers expect in the new year?

Informa's Financial Intelligence’s top market analysts held a roundtable last week to discuss the economic recovery, the state of U.S. markets—equity and fixed income, and what to expect from currency markets, especially in the emerging markets.

The big unknown "is how the coronavirus vaccine story plays out," said Cameron Brandt, director of research at EPFR, an Informa company that provides data to financial institutions (Informa is also the owner of WealthManagement.com). "It will only take one vaccine producing more than expected adverse reactions for that narrative to take a more somber turn."

Brandt added that cash has been slower coming off the market's sidelines than in the aftermath of the financial crisis. Within nine months of the 2009 bottom some $400 billion had moved out of money market funds, he said. This year the money has been returning at "a much slower pace."

"I actually think you will see a good chunk of these assets remain in cash," said Ryan Nauman, market strategist for Informa Financial Intelligence’s Zephyr, throwing water on the idea that cash on the sidelines will enter the market and send it higher in 2021.

"These risk-averse investors cannot afford another sell-off, they just don't have time to recover," he said. Pointing to the surge in COVID-19 cases, the threat of regional lockdowns, and a fragile job recovery, "I think for some the best place for them right now is cash."

Nauman said if Congress didn’t provide fiscal relief until a vaccine is available to the masses he sees potential for a double-dip recession in the near term. But in a best-case scenario, he sees a sustained rotation trade out of technology stocks into value stocks, with cyclicals and small caps leading the way in 2021. Still, semiconductors and cloud computing stocks should benefit from a global recovery.

Shankar Ramakrishnan, senior bonds editor at Informa Global Markets, said the excess cash would be a boon for investment-grade bonds, and could lead to more issuance. If businesses are still suffering, he said more companies would go to the debt market to build liquidity buffers rather than think everything is over.

In 2020, Ramakrishnan said, there was $1.8 trillion of issuance in investment-grade bonds, excluding sovereigns and supranationals. Next year, issuance is expected to be at least $1.2 trillion, with almost $140 billion in January.

"If the situation doesn't change dramatically, I don't see why companies should not continue issuing and investors not continue buying these bonds, because they are positive yielding," said Ramakrishnan.

He said in the investment-grade market there is a race for yield. But investors are shifting toward the long end and are going higher on risk, with Triple-B-rated issuers getting more attention.

Meanwhile, high-yield markets are on fire because, he said, the perception has become that anything which is rated has some sort of due diligence being done on it, and better than buying something not rated at all.

He said triple-C-rated bonds are getting a lot of traction even though they are the riskiest part of the junk-bond market.

Meanwhile, the Federal Reserve's accommodative policy of easy money has had a detrimental effect on the U.S. dollar. Last week the Fed said that it would continue to buy $120 billion of bonds each month until "until substantial further progress has been made toward the Committee's maximum employment and price stability goals."

In light of the Fed's statement this week, and global growth making a comeback, it looks like the dollar will continue to fall against a broad set of currencies in 2021, said Jonathan Cavenagh, Senior Markets Strategist at Informa Global Markets.

After a rally in emerging market currencies on the weak dollar during the second half of 2020, Cavenagh said he still sees value in Indonesia, where the central bank sees the currency being undervalued, and in the Brazilian real.

"We're looking at currencies that haven't fully adjusted back to their pre-COVID-19 levels, where the carry is still very attractive," he said. "And we can see that real yield particularly in a market like Indonesia is still attracting inflows into the course of 2021."

Cavenagh said the consensus is that the dollar will still be in a lot of trouble in 2021 with better global growth and the Fed remaining very accommodative. "I think that that should be a dominant theme that sees emerging market currencies continue to strengthen against the dollar as we progress through 2021."

Cavenagh said U.S.-China tensions will continue, but won't be expressed through the foreign exchange market like they were during the Trump administration. He expects a stronger Chinese exchange rate to help reduce tensions with the U.S.

With Bitcoin currently hitting record highs, Cavenagh said he thinks cryptocurrencies will be a growing part of the financial markets landscape.

Meanwhile, Nauman said he was more cynical regarding Bitcoin and cryptos. However, he's looking at the financial institutions that are becoming more receptive to Bitcoin. "As that grows, I think then the valuation can go higher."