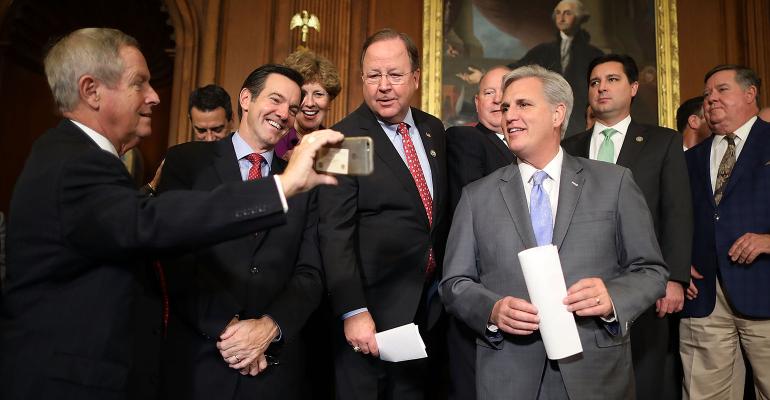 (Bloomberg) --Economists or stock market analysts -- who are you going to believe?

Whether you take the view that tax cuts will be a boon for corporate profits or the position that they’ll do little for the American economy may depend on whether you trust gleeful Wall Street forecasters of equities or gloomier, debt-focused economists.

Rising prospects for tax cuts have boosted U.S. stocks to fresh records, with company profits a prime beneficiary. That’s prompted equity analysts to predict the eight-year bull market will march higher to become the longest on record. Yet many top economists see little long-term economic benefit from tax reductions and some predict government debt will rise to troubling levels.

In recent weeks, corners of the stock market deemed most sensitive to lower taxes have been outperforming. Small caps have more than doubled the return of large caps since Nov. 15, with analysts noting that smaller companies tend to have higher realized tax rates than their bigger counterparts and would benefit more from a cut to the corporate levies.

Even an erstwhile equity bear was moved to lift his target for the S&P 500 Index. David Kostin at Goldman Sachs Group Inc. earlier this month increased his 2018 year-end prediction for the index to 2,850 from 2,500, citing an expansion in profits and valuations aided by cuts to the corporate tax rate. The index was little changed at 2,601.42 on Monday.

While many analysts looking ahead to 2018 left the impact of tax changes out of their forecasts, Keith Parker of UBS Group AG said the S&P 500 can surge to 3,300 should tax cuts take effect next year. He sees the measure finishing at 2,900 without the cuts.

The Senate’s tax-cut bill faces a crucial committee vote Tuesday as Republicans try to push it through to full Senate passage by the end of the week, with two GOP members threatening to stall the measure.

Most private U.S. economists don’t see an economic boom. A survey by the University of Chicago’s Booth School of Business -- a poll that includes Republicans, Democrats and independents, among them Nobel- and other prize-winners -- found just one of 38 respondents agreed GDP would be substantially higher in a decade from tax cuts than under the status quo, while 39 percent were uncertain, and 58 percent disagreed.

“Nothing in the bill suggests it will increase growth,” said Richard Thaler, the University of Chicago professor who last month won the Nobel Prize in economics. “Corporate profits are already high and they are sitting on piles of cash. Why should we think they have profitable investments that they are not doing now but would do if the tax were lower?”

The U.S. has outperformed Europe and other advanced economies since the 2007-2009 recession ended, mainly due to more effective monetary policy rather than taxes, said David Autor, a Massachusetts Institute of Technology professor.

While he agrees the corporate tax system is “egregiously bad” and needs reform, he says “tax rates hardly seem to matter at the margin for economic growth in advanced countries with reasonable tax systems.”

There will be a boost to growth in 2018, but not a large one, a separate Bloomberg survey of economists earlier this month found. Of 22 responding who expected passage, all predicted some boost from the $1.5 trillion, 10-year proposal, with gains ranging from 0.05 to 0.9 percentage point and a median of 0.28 point. They also predicted reduced demand for housing as part of the plan, which may affect use of the deduction for mortgage interest. The Chicago survey found the economists agreed the tax legislation would boost U.S. debt as a proportion of gross domestic product, some to levels that could be dangerous. “Within 10 years, the federal government will lose access to credit,” Robert Hall, who heads the National Bureau of Economic Research’s committee that charts expansions and recessions, responded in the survey.

The White House says lower tax rates will lead to an investment boom as companies choose to locate plants in the U.S. instead of lower-tax jurisdictions. That could lift growth from an average of 2.2 percent since the past recession, according to Kevin Hassett, chairman of the White House Council of Economic Advisers.

Backing him are nine economists, most of whom served in Republican administrations, who signed a letter Nov. 25 to Treasury Secretary Steven Mnuchin that was published in the Wall Street Journal. They argued that corporate tax cuts would help to lift U.S. GDP by 3 percent to 4 percent over the long run because of an investment boom.

“Fundamental tax reform of the type being proposed would have an important effect on long-run GDP,” wrote the group, including Glenn Hubbard, who served as President George W. Bush’s chief economist, and Stanford University’s John Taylor, a Treasury official under Bush.