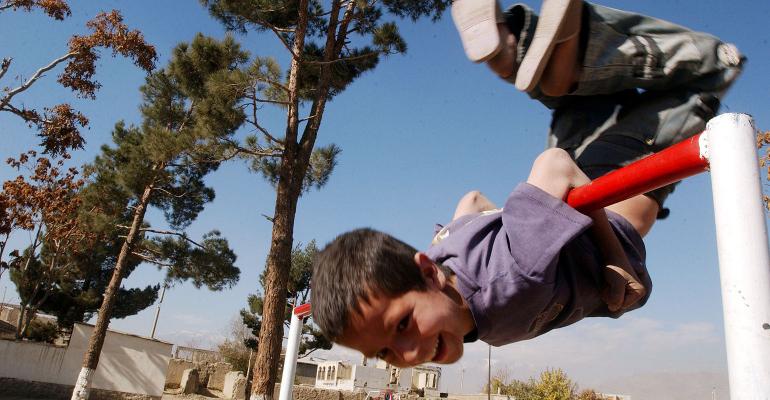 The higher stocks climb, the worse the fall can be, TIAA's Nick says.

(Bloomberg) --Brian Nick, chief investment strategist of TIAA Investments, said stockholders who profited from the surging U.S. equity market need to be on guard against a reversal, just like a father would counsel caution as a child moves further from ground level on a jungle gym.

“When I see my 2-year-old son on the playground, if he’s really high, I’m not worried that he’s more likely to fall. I’m just worried that if he does fall it’s going to be worse,” Nick said Monday in an interview on Bloomberg Television. “I try to do pretty careful parenting to prevent that, but if it’s your portfolio, you have to worry about what’s had the best run. Over the past five years, the best game in town has been the U.S. equity market.”

Nick has been advising investors for months to add bets in Europe, saying March 17 that markets were too worried about political risk on the Continent and overly optimistic about the world’s largest economy. That advice proved well timed, as the Stoxx Europe 600 Index has posted a return of almost 5 percent since that day, more than a percentage point better than the S&P 500 Index in the U.S.

While the American benchmark has been the better performer over a longer period, it’s gotten relatively more expensive than its European counterpart. The S&P 500 trades for almost 19 times projected earnings, compared with a valuation of 16 for the Stoxx 600.

“If hedging against a decline in the stock market or a rise in volatility, think about what looks overvalued -- what’s run up probably past the point of fundamentals,” Nick said. “In the U.S., we’ve hit valuations as high as it can go for right now.”

He added that some industries could still post gains. Banks for instance, will benefit from higher interest rates.

Nick’s unit oversees a portion of the more than $800 billion in assets under management at TIAA’s Nuveen segment. His firm has a target yield of 2.75 percent on 10-year Treasuries by the end of this year, compared with current levels of about 2.12 percent.

“If that comes good, you will see financial stocks do particularly well,” he said. “And I think that will probably also be correlated with higher energy prices, if we have the economy heating up around the world and in the U.S.”