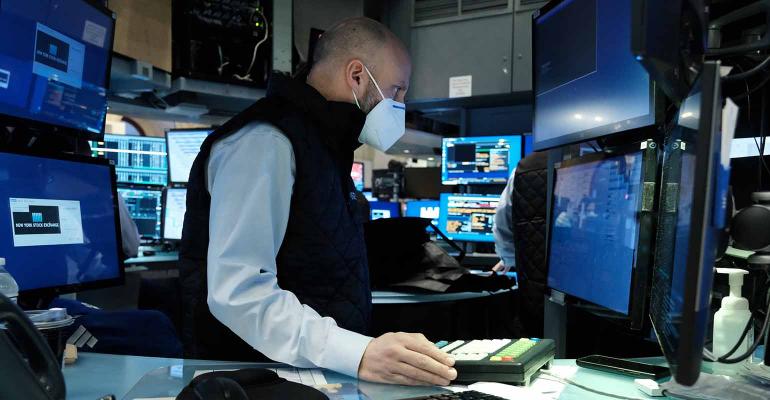 Almost half of high-net-worth individuals globally said they were highly concerned about a market downturn, according to a UBS Global Wealth Management survey.

Almost half of high-net-worth individuals globally said they were highly concerned about a market downturn, up from 45% at the same time a year ago, according to a UBS Global Wealth Management survey. The responses were collected from Jan. 4 to Jan. 24 -- a period in which the S&P 500 Index fell as much as 12.4% on an intraday basis. At one point, that was its worst-ever start to a year.

In the U.S., where the Federal Reserve is expected to raise interest rates in March, 61% of those surveyed by UBS said they had more than 10% of their portfolio in cash and equivalents, up from 59% heading into 2021. More than 80% said the Biden administration should make controlling inflation a key priority.

“Against a backdrop of inflation and rate hikes, investors are waiting for the ‘right opportunity’ to invest in sectors such as healthcare and technology,” according to the UBS report, which surveyed 3,000 people with at least $1 million in assets and 1,200 business owners with $1 million or more in annual revenue.

While U.S. equities have rebounded from last month’s lows, investors are still on edge about how quickly central banks will tighten monetary policy. An unexpectedly strong U.S. jobs report last week boosted the odds that the Fed will start with a half-percentage-point increase to its benchmark lending rate next month.

Meanwhile, the consumer price index probably increased 7.3% in January from a year earlier, the highest since 1982, according to economists surveyed by Bloomberg. That data will be released Feb. 10.

High-net-worth U.S. investors are getting ahead of potentially higher interest rates by taking out new mortgages and refinancing existing ones, and also tapping security-backed loans, according to UBS.