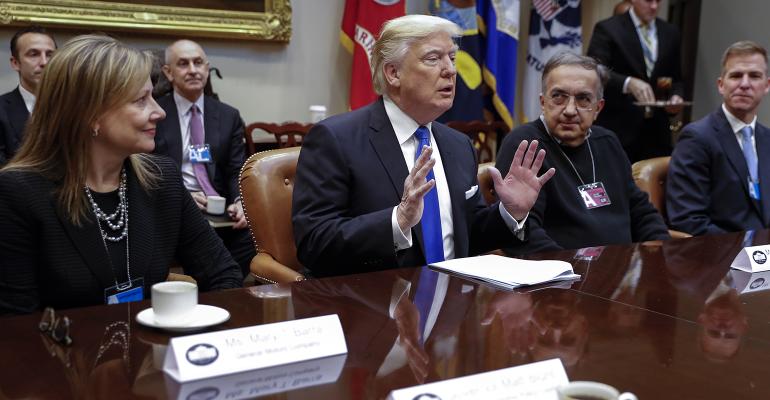 Trump's Tweets Don't Turn Out to Be Useful Stock Tips

Trump has embraced Twitter, but that doesn't mean anyone can predict what happens to a company's stock when he tweets about it.

(Bloomberg Gadfly) --President Trump has embraced Twitter as his bully pulpit, a 140-character instantaneous broadcast of his pronouncements and denouncements, including about companies that he thinks deserve his praise or ire.

Some big banks and hedge funds are apparently using computer programs to trade instantly on his tweets, but their actions are shrouded in secrecy. Few people know who these traders are, what programs they use or how successful they are at exploiting Trump’s rants. As Josh Brown, chief executive of Ritholtz Wealth Management, told the Los Angeles Times, “The secrecy isn’t surprising because firms employing the programs don’t want to reveal their advantage.”

What is clear, however, is that retail investors are getting in the game. A conventional wisdom is taking root that Trump’s tweets move stock prices in predictable ways, and a growing number of outlets will alert investors when Trump tweets about a company. The Bloomberg terminal is one, and so are apps from Trigger Finance Inc. and IFTTT Inc.

There’s just one problem: It’s not at all clear that Trump’s tweets have any predictable effect on stock prices.

Nor is there any apparent relationship between Trump’s tweets and subsequent declines in stock prices. Trump criticized Toyota Motor Corp. on Jan. 5 for plans to build a plant in Mexico. Toyota’s U.S.-listed ADRs are down 1.9 percent through Friday. Four days later, Trump praised Fiat Chrysler Automobiles NV for its plans to add 2,000 U.S. jobs. But Fiat Chrysler’s U.S.-listed stock is also down -- 3.9 percent through Friday. It’s not even clear that markets are paying attention to Trump. Yes, sometimes volume surges after a Trump stock tweet, but other times it declines. For example, on the day that Trump tweeted about Ford, the stock’s average volume surged 53 percent from the previous day. Volume was also higher when Trump tweeted about Boeing Co., Lockheed Martin Corp., GM and Toyota.

But here’s the real kicker. If investors had faithfully followed Trump’s tweets and bet equal amounts on each company that Trump praised -- Ford, United Technologies and Fiat Chrysler -- and against each company that he criticized -- Rexnord, Boeing, Lockheed Martin, GM and Toyota -- their reward would have been a loss of 1.6 percent through Friday. On the other hand, if investors had invested those same amounts in the S&P 500 on those same dates, their return would have been 2 percent (excluding dividends in each case).