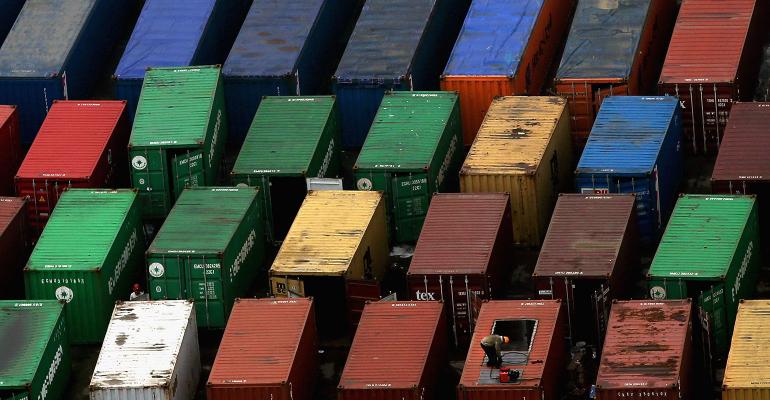 Trump Trade Promise Will Do No Good to Stocks

Better-designed treaties should focus on increasing U.S. exports globally, even if that means imports rise.

(Bloomberg Prophets) --President Donald Trump’s major campaign promises included an acceleration in U.S. growth to at least 3 percent, and a lowering of the trade deficit with countries he sees as having unfairly benefited. Although growth picked up to a revised 3 percent for the second quarter, the consensus view is that this will not be maintained in coming months.

Now, the president sees a surging stock market as a sign his policies are succeeding. The Trump administration could soon find that pursuit of restrictive trade measures slows economic growth rather than speeds it up, and that equity investors end up voting thumbs down, too.

The crux of the problem is the focus of U.S. negotiators on bilateral trade negotiations -- especially with Mexico and China -- and the threat of increased tariffs on specific items considered as being unfairly “dumped” in the U.S. market. With the imported products selling at lower prices than their U.S. competitors, the Trump administration perceives a loss of competitiveness and consequent loss of U.S. jobs.

There are two major consequences of this approach. First, U.S. consumers would have to pay higher prices for imported products after incorporating the new tax. This is why companies such as Wal-Mart Stores Inc. opposed, and eventually succeeded in killing, a Republican-sponsored border-adjustment tax. The pickup in inflation after an import levy, in turn, would have prompted the Federal Reserve to hike interest rates more aggressively, reversing the “dovish” approach that equity investors prefer.

Second, unilateral levies typically encounter a retaliatory move from the exporting country. For example, Mexico is the principal export destination not only for large U.S. states such as California and Texas, but also for smaller states such as Kansas that have a trade surplus with Mexico. If the U.S. unilaterally withdrew from the North American Free Trade Agreement, as Trump suggested recently, farm exports from Kansas to Mexico could be a major loser. For the U.S. as a whole, monthly exports to Mexico surged from $3.9 billion in December 1993 (the last month before Nafta was introduced) to $21.4 billion in June 2017. In the case of China, Peter Navarro, who advises Trump on trade, justified the imposition of a 45 percent tariff on imports. No matter how U.S. officials justify such a sizable tariff, Chinese authorities will likely retaliate with measures that would hit not only large American multinationals such as Google and Apple, but also thousands of U.S. farmers. Monthly U.S. exports to China rose from $1.9 billion in December 2001 (the month China was inducted into the World Trade Organization) to $9.7 billion in June 2017. In short, both Mexico and China are becoming increasingly important for U.S. exporters, and there would likely be no winner in a trade war.

Is there a way for Trump to keep his campaign promises and avoid a trade war that could hurt profitability of the S&P 500 companies, which obtained 43 percent of their revenue last year from outside the U.S.? The way out of the impasse would be to negotiate the best possible trade agreements on a multilateral basis, where U.S. negotiators would have the best ability to exploit the different national interests of the trade partners.

For example, as one of his first moves after assuming the presidency in January, Trump withdrew the U.S. from negotiating the Trans-Pacific Partnership, which was intended to make Canada, and several countries in Asia and Latin America, more welcoming of U.S. exports, and to reduce their dependence on Chinese markets. If the president shifts policy and reinitiates the pact but while making it contingent on allowing U.S. corporations to compete on an equal footing with domestic competitors, Trump would boost U.S economic growth, create jobs and provide a powerful stimulus to equity valuations.

There also is a benign alternative to a unilateral withdrawal from Nafta. Both the U.S. economy and financial markets would profit if, for example, steps were taken to help the automotive sector -- a major beneficiary of the three-country pact. These companies should be assisted in lowering their costs by improving the supply chain of parts, rather than increase the local content requirement as U.S. negotiators have been insisting. This sector is a large U.S. employer, but has underperformed equity benchmarks. It could use the stimulus to profitability that a revised Nafta would provide.

Trump may be correct in suggesting that the trade agreements as they currently stand are not fair to U.S. labor, and that they adversely impact how investors view the companies. The solution, however, isn't to end the pacts or restrict trade with new taxes. Better-designed treaties should focus on increasing U.S. exports globally, even if that means imports rise. Investors should take their cues from whether this, in fact, is the path the Trump administration follows.

Komal Sri-Kumar is the president and founder of Sri-Kumar Global Strategies, and the former chief global strategist of Trust Company of the West.