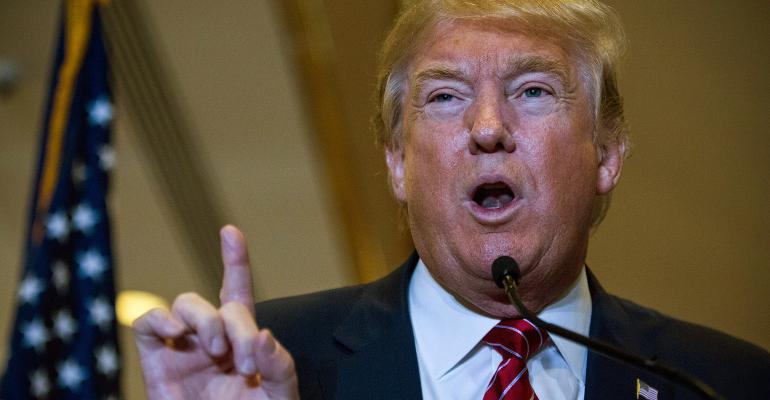 A rundown of key components of the proposed changes in tax policy and how strategists surveyed by Bloomberg see them affect S&P 500 earnings.

(Bloomberg) --As much as anything, tax breaks promised by Donald Trump have fueled the rally in U.S. stocks since Election Day. A few strategists drilling down on the proposals are wondering what everyone’s so excited about.

Sure, lowering the corporate tax burden to as little as 15 percent has the potential to reinvigorate growth, boosting earnings at a time when S&P 500 Index’s valuations are among the highest in history. But as alluring as the prospect is, other initiatives ranging from border adjustments to an end of interest deductions could easily wipe out the benefits.

In a market fattened by $2 trillion of gains since November by investors awaiting a boost to earnings, that’s not great news.

Companies, on the other hand, are growing leery. Among conference calls this earnings season, there have been 80 mentions of the adjustment tax and more than 30 mentions of interest deductibility, suggesting a “high level of focus” on tax policies that may hurt earnings, according to Bank of America Corp.

Below is a rundown of key components of the proposed changes in tax policy and how strategists surveyed by Bloomberg see them affect S&P 500 earnings.

Depending on how low rates go and when cuts happen, the range of estimates is wide.

Barclays strategist Keith Parker calls the proposal “a low probability but potentially very high-impact event”. The plan, which taxes products based on where they’re consumed rather than where they’re produced, would hurt importers and help exporters. And for S&P 500 companies, imports matters more than exports.

An implementation would shave S&P earnings by 6 percent, half the benefit that companies could get from a 20 percent income levy, Parker estimates. Should it cause economic growth to slow and the dollar to strengthen, as he expects, earnings wouldn’t really get a boost at all.

Ned Davis Research ran a scenario analysis based on the latest financial results to illustrate the drag on earnings should interest expenses no longer be deductible. It calculated that a 20 percent tax rate would boost profit by 7.2 percent, but once interest deductions are removed, the benefit shrinks to 2.6 percent. In other words, about two-thirds of the gain from tax cuts would be wiped out.

More long-lasting would be the proposal’s impact on corporate behavior and the stock market. For years, companies have been on a borrowing spree to fund buybacks and mergers, partly because interest is deducted from income before tax bills are calculated. Corporate buying, either of their own stock or that of others, has been a key driving force during this bull market where almost everyone from individuals to pension funds are sellers.

“If higher after-tax interest expense results in more shares outstanding, either through more companies being listed or fewer buybacks, then the end result should be downward pressure on stock price,” said  Ed Clissold, chief U.S. strategist at Ned Davis.

S&P 500 companies could bring back more than $1 trillion from overseas, but companies would be less inclined to spend it on their own shares than they were in 2004, when 80 percent of the money was used for buybacks, according to Bank of America.

The reason is simple. Stocks are more expensive. The S&P 500 trades at a higher multiple than 2004 on seven valuation measures including the price-earnings ratio and price to book. While a majority of investors wanted companies to return cash to shareholders in late 2004, Bank of America’s latest survey showed only 17 percent of money managers desired that. Most of them asked for an increase in capital spending.

Additionally, an end to interest deduction may prompt companies to use the cash to pay down debt over buybacks.

As for its impact on earnings, Bank of America estimates that if only half the repatriated money were to be used for buybacks, it’d lift S&P 500 EPS by $4. But that’s after a one-time, repatriation tax-related charge of $8 to $9 a share that companies would have to pay first.