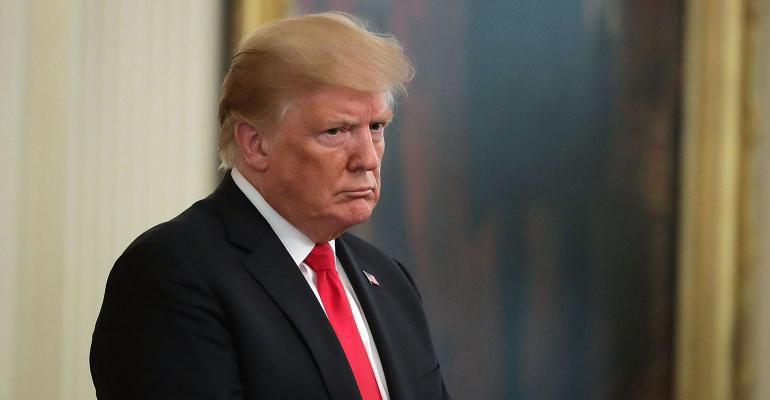 "I don’t know how you can impeach somebody who’s done a great job," Trump said on Fox News Thursday morning.

By Terrence Dopp and Justin Sink

(Bloomberg) --President Donald Trump said he doesn’t see a reason for Congress to impeach him but that the stock market would plummet and Americans would be poorer if lawmakers did so.

"I don’t know how you can impeach somebody who’s done a great job," Trump said in a wide-ranging interview with Fox News broadcast Thursday.

"I’ll tell you what, if I ever got impeached, I think the market would crash,” Trump added. “I think everybody would be very poor. Because without this thinking you would see numbers that you wouldn’t believe, in reverse."

Trump’s remarks built on his history of defying presidential traditions by commenting extensively on the stock market. U.S. equities are in the middle of the longest bull market ever, buoyed in part by his tax cut but predating him by years and undergirded by corporate earnings and low interest rates.

The U.S. Constitution says the president, vice president and "all civil officers" -- which has been construed to include judges and members of a president’s cabinet -- "shall be removed from office on impeachment for, and conviction of, treason, bribery, or other high crimes and misdemeanors."

Trump’s Republican Party holds a majority of seats in the House of Representatives, where articles of impeachment originate and which decides whether any perceived offenses rise to that level. Democratic leaders have mostly declined to discuss impeachment as they try to recapture a majority in the November midterm elections.

Two U.S. presidents -- Andrew Johnson in 1868 and Bill Clinton in 1998 --- have been impeached, though in neither case did the required two-thirds of the Senate vote to convict, which would have resulted in removal from office. The House has initiated proceedings more than 60 times and voted to impeach 15 federal judges and one senator in addition to the chief executives.

During the Fox interview, Trump also lamented Attorney General Jeff Sessions’s inability to gain “control” over the Justice Department, the practice of prosecutors "flipping" criminal defendants and illegal immigration. Trump also boasted about the state of the economy since his election.