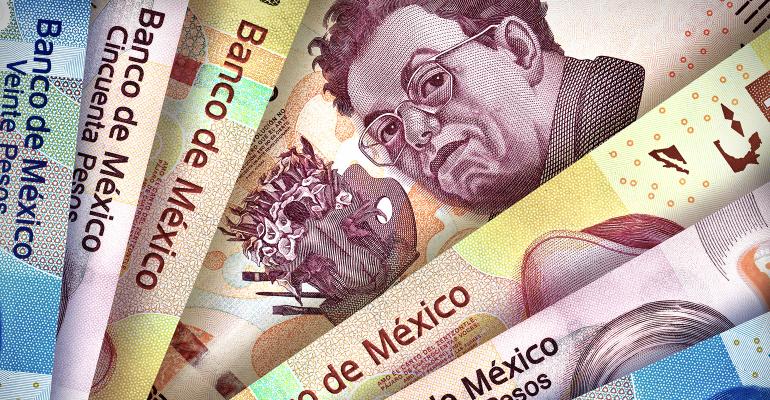 The rise of a hostile U.S. president sent stocks, bonds and the peso reeling. That was then.

(Bloomberg View) --Nothing in the 21st century hit investors in Mexico harder than the rise of President Donald Trump.

The peso plummeted to a record low, losing 17 percent of its value among 16 major currencies in 2016. Mexico, which for more than two decades outperformed the 26 countries that make up the emerging market, saw its companies suffer their biggest share losses since at least 1994, when such data was first compiled. Mexico’s bonds, the emerging market favorite since at least 2010, when figures were first published, collapsed in an unprecedented reversal, according to data compiled by Bloomberg.

Yet there’s now reason to think that the Trump effect on Mexican markets may be about to run its course. A few indicators of expectations for the future have stabilized, suggesting the waning of Trump-induced pessimism about the prospects for Mexican companies, Mexican debt and the Mexican economy.

Investors have certainly had legitimate reasons to fear the worst. No country since 1980 does as much trade with Mexico as the U.S., a total of $480 billion last year, not including the remittances sent home by Mexicans working north of the border. Not since James K. Polk made the case for war against Mexico in 1846 has a president been as hostile to the Latin American neighbor as Trump. He’s referred to Mexican immigrants as “killers” and “rapists”; he derided an Indiana-born judge for his “Mexican heritage”; he’s vowed to build a wall to prevent Mexican “criminals” from entering the U.S., and he’s promised to rip up the North American Free Trade Agreement that benefits not only Mexico but also Canada and the U.S. by establishing the world’s largest free-trade area of 450 million people and gross domestic product of $20.8 trillion. In the two decades since Nafta became law, the three countries' trade quadrupled to $1.14 trillion from $297 billion.

Trump loomed so large that traditional investment patterns dissolved in 2016. Until last year, stocks in Mexican companies advanced at a faster rate than any emerging market’s since 1995, with the exception of the 2007-2009 global financial crisis. Despite political stability, money invested in Mexico has been fleeing to Brazil, where President Dilma Rousseff was impeached and removed from office and her successor, Michel Temer, is mired in corruption charges that may end his career. The capital flight is revealed in the 42-percent outflow this year from the largest Mexico exchange-traded fund while Brazil's biggest ETF benefited from an inflow of 28 percent, according to data compiled by Bloomberg.

At the same time, the Mexican stock market stopped being a bellwether for U.S. shares, as it had tended to be for two decades. The correlation between Mexican and U.S. share-price movements tumbled to a record low of 0.4 (zero would mean there was no relationship and 1 would mean they moved in lockstep), according to Bloomberg data -- down from 0.8 before 2014 and 0.6 just before the 2016 election. Mexico’s debt also reversed its superior performance in 2016 after years of strengthening relative to other emerging economies. The relative inferiority of Mexican bonds during the ensuing 16 months has been the worst performance since data was compiled in 2010. The price of oil, whose fluctuations traditionally influenced the peso, had lowest correlation with the Mexican currency since 2008.

Yet there is one lodestar in the markets that suggests a turnaround. The peso's implied volatility, a measure of trader bets on the currency's future price swings, tumbled 48 percent since early November and today is one percentage point below its five-year average, according to data compiled by Bloomberg.

After hitting a record low in January, the peso gained 15 percent this year as the best-performing of the 16 major currencies. Analysts surveyed by Bloomberg also predict the peso will return a total of 5.6 percent (income plus appreciation) by the end of 2018 as No. 4 among the best-performing currencies. The recent confidence also is revealed in the peso's 50-day moving average, which exceeded its 200-day moving average in April. Traders call this the “golden cross,” an indication that a currency is poised to rise. It's reasonable to pin these intimations of a turnaround on Trump’s failure to deliver on his threats. For all his bluster, he has yet to win the support of Congress on overturning Nafta or building the border wall.

Meanwhile, Mexico's GDP growth outperformed the U.S. and Canada last year and economists surveyed by Bloomberg predict that Mexico will be the leader in 2019. While consumer price inflation surged to 6.16 percent this year from 3.4 percent, traders are betting it will drop to 3.86 percent in the months ahead, Bloomberg data show.

Analysts surveyed by Bloomberg also anticipate record earnings by Mexican companies, in contrast to weak forecasts for emerging markets generally. That would make many Mexican stocks a bargain in the coming year.

Against this backdrop, analysts surveyed by Bloomberg predict that consumer discretionary companies in Mexico will gain 17 percent during the next 12 months compared to 9 percent for the rest of the emerging market, an indication that Mexican shoppers are ready to open their wallets. Which is another way of saying, the worst may be over for investors in Mexico.