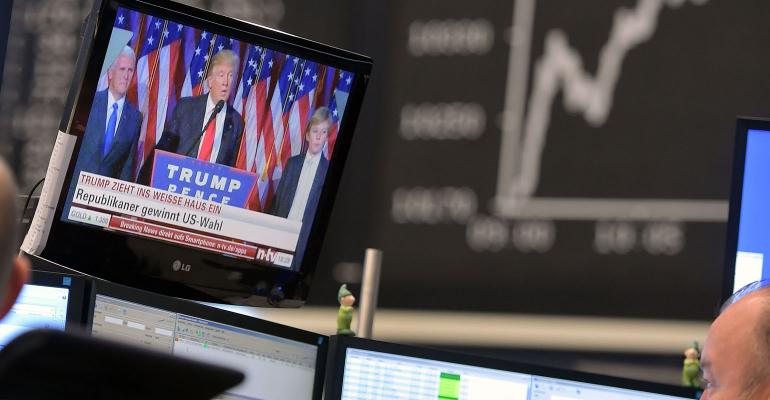 The post-election rally is the biggest since Ronald Reagan.

(Bloomberg) --Donald Trump is doing to U.S. equity bears what seven years of economic stimulus rarely could: shut them up.

Two years of paralysis has for now ended in stocks, with more than $1 trillion added to shares values since Election Day and the Dow Jones Industrial Average looking bound for 20,000. Both the Dow and S&P 500 Index jumped to fresh records Wednesday, joined by transportation companies and small caps, while banks traded at eight-year highs.

Wall Street stock forecasters, more pessimistic than any time since 2013 as recently as September, are suddenly falling over themselves to push up targets and explain a market where measures of anxiety are near five-year lows. The average call of bank prognosticators is for the S&P 500 to rally 3.4 percent next year, with strategists at JPMorgan Chase & Co. and Bank of Montreal calling for even bigger gains.

For investors, the question is how much credence to put in analysts whose futility in sussing out Trump’s impact on share prices was rivaled only by the inaccuracy of political polls prior to his victory. Not only has he not been the disaster many of them warned about, the rally since he defeated Hillary Clinton is now the biggest for any new president since Ronald Reagan.

“What we didn’t expect was the speed and the magnitude of the so-called ‘Trump Trade,’” Doug Ramsey, chief investment officer at Leuthold Group LLC, wrote in a note published Wednesday. “The consensus hope, which we share, is that tax reform and regulatory roll-back will extend and maybe enliven an economic recovery that’s already long in the tooth.”

To be sure, pinpointing Trump’s role in the rally is an inexact science, and a case could be made that his election is coinciding with the consummation of the Federal Reserve’s efforts. Among other things, annualized gross domestic product rose 3.2 percent in the third quarter, the most in two years, while unemployment hit a nine-year low in November.

But the rally is particularly hard to reconcile with the body of pessimism that has shadowed the Barack Obama bull market since it started in 2009. Headwinds that looked certain to halt the advance just one month ago -- from stalled corporate earnings to the highest valuations since the Internet bubble and the sputtering economy -- are proving little match for the new president’s economic pronouncements.

Not that those obstacles have gone away. While signs of a rebound emerged in the third quarter, profits for S&P 500 companies just underwent one of the longest stretches of declines for any non-bear market period on record. At just under 21 times earnings, stocks are trading at the highest multiple since 2001, excluding a few months after the financial crisis when earnings in some industries were close to nothing.

The suddenly booming stock market has prompted fund managers who had been hoarding cash amid economic and political uncertainty to put money to work at the fastest rate since 2009. According to Bank of America Corp.’s latest survey in November, cash levels plunged to 5 percent from 5.8 percent in October.

Investors are fretting they’ll miss out on a year-end rally. They added almost $50 billion to exchange-traded funds that track U.S. equities last month, the most since Bloomberg began tracking the data since 2000.

Not only are stocks rising, they’re offering fertile ground for a category of mutual funds that suffered as the Obama rally devolved into a monolith of lockstep moves. Dispersion among S&P 500 stocks, trader lingo for the ability of share prices to chart an independent course, is increasing and poised to get better, according to Goldman.

Next year will bring “opportunity for alpha generation,” due to macro and micro shifts associated with Trump administration and aging economic cycle, Kostin wrote in a note to clients this week. By one measure, dispersion the week after the election reached the biggest in almost eight years.