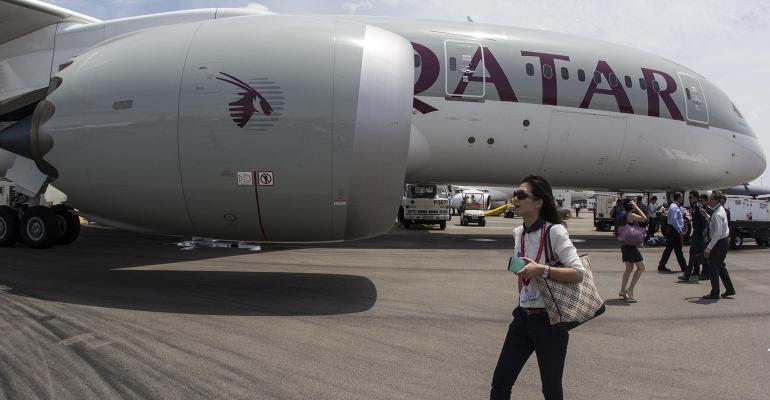 With asset prices tumbling, keep an eye on fundamentals.

(Bloomberg) --Now that U.S. President Donald Trump has thrown his support behind the Saudi-led effort to isolate Qatar, investors say the resulting market shock could create a buying opportunity for local assets.

Trump described the decision by Saudi Arabia and three other Arab nations to suspend travel to Qatar as a just punishment, adding fuel to a spat that has already sent Qatari assets tumbling. The nation’s benchmark index of stocks fell to a 16-month low, forward contracts on the riyal that expire within 12-months touched a record high on Tuesday and the extra yield investors demand to hold Qatari bonds over U.S. debt was the most since August. “Investors must keep an eye on fundamentals,” said William Jackson, a London-based emerging-markets analyst at Capital Economics Ltd. “Qatar’s still got enormous foreign currency savings, its debt level is relatively low and the authorities have plenty of scope to support the currency.”

Not only have Qatar’s international reserves climbed every month this year through April to $34 billion, it’s home to a $335 billion sovereign wealth fund, among the largest globally. Its debt-to-gross domestic product stood at 56 percent at the end of 2016, compared with 60 percent for the United Arab Emirates, according to Central Intelligence Agency data compiled by Bloomberg.

Qatari assets were thrown into a tailspin after Saudi Arabia, the U.A.E., Egypt and Bahrain cut diplomatic ties with the Gulf nation, accusing it of supporting a range of violent groups. Tension among Gulf Cooperation Council states isn’t new. The last disagreement between the world’s largest exporter of liquefied natural gas and other Arab nations was in 2014, which was resolved in seven weeks.

But “this time the diplomatic row is quite serious and unprecedented in depth and steadfastness,” said John Sfakianakis, the director of economic research at the Gulf Research Center. The risk is that Qatar “will start countering with policy measures in reaction to what has been announced,” he said. The decline in the QE Index this week brought the gauge’s loss in 2017 to 14 percent, the worst performance among more than 90 measures tracked by Bloomberg globally. Qatar National Bank, the largest lender in the Middle East, closed on Tuesday at the cheapest relative to emerging-market peers since 2013.

While Derrick Irwin has yet to make a Qatar “shopping list,” the money manager who helps oversee $8.3 billion at Wells Capital Management in Boston says a handful of local companies might look attractive for longer-term investors buying on weakness.

Qatar’s dollar bonds due 2026 fell to 98.7 cents on the dollar, and five-year credit default swaps climbed to 81 basis points, double the contracts for Abu Dhabi’s debt. If the bonds lose another 4 cents, then it would be an attractive entry point for Shahzad Hasan, an emerging-market debt portfolio manager at Allianz Global Investors in London, which has $511 billion under management.

Even though the riyal’s 12-month forward contracts jumped to as high as 625 basis points on Tuesday, “betting against the peg is likely a losing proposition,” said Win Thin, the head of emerging-market strategy at Brown Brothers Harriman & Co. in New York, who recommends overweight positions in equities in the United Arab Emirates and Egypt, and is underweight Qatari stocks.

The contracts fell to 350 basis points on Wednesday. The nation has pegged the riyal at 3.64 per U.S. dollar since 2001.