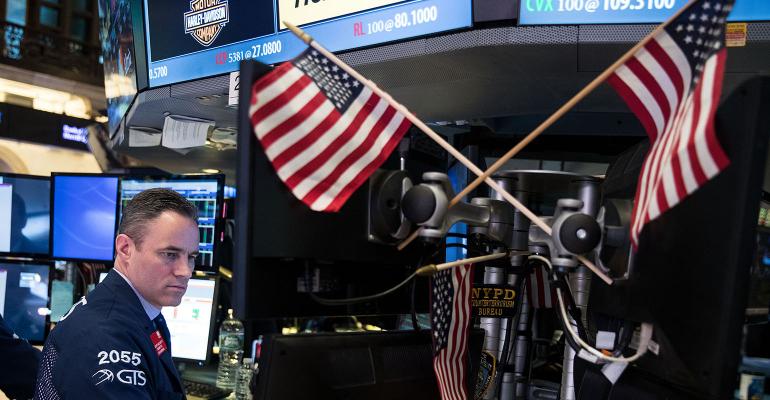 The Trump administration's bombing of Syria added another layer of uncertainty to financial markets.

By Lu Wang and Ben Bartenstein

(Bloomberg) --Financial markets that were initially spooked by U.S. missile strikes against Syria may have settled down, but that doesn’t mean investors are just taking things in stride. Oil reacted as well. After jumping to a one-month high, crude prices have fallen back close to where they were before the assault. The Syria trade is also fading in the currency and bond markets, with the dollar rising slightly after an initial drop, while Treasuries pared their gains.

Still, some fund managers and traders say they’re not letting their guard down.

The bombing added a layer of uncertainty to financial market that are already grappling with policy quandaries from U.S. President Donald Trump’s pro-growth agenda to the pace of the Federal Reserve’s tightening schedule. Here’s what some investors and analysts are saying about the effect of U.S. military activity in Syria on their market views as Trump meets with China President Xi Jinping.

“One cannot know the extent of a shooting war or a military action until it happens, and then one cannot know the outcome until it becomes clear. One can act on early signs or discernible trends. That this incident has occurred just as the leaders of the two largest economic forces in the world are meeting in Mar-a-Lago is an incredible coincidence of timing. But it is also a reality check on the world situation, which we believe is at a high-risk point.”

“For me, the big question relates to the role of Donald Trump as U.S. President and how it may impact economic sentiment. The markets have built up a lot of optimism about tax reforms and prospects of stronger growth, but if Trump realizes he won’t be able to push through reforms and allows himself to be distracted by foreign policy, there is a risk that the enthusiasm we have seen in survey data may start to wane.”

“There’s been a response, but it seems to be a surgical strike. I think the market reaction has been reasonable because it may just be a one-off. If he continues with using chemical weapons there’s definitely a risk-off escalation. I think the market is getting more comfortable with this not-going-to-escalate scenario.”

“The event reminds me there’s always an exogenous factor that may just come in and totally change your outlook on where rates might go in the near term. But I don’t know whether it does that at this moment. I’m still bullish on the economy, I still expect rates to rise. I need to see how Syria unfolds a little bit more. This isn’t enough to change my outlook materially at this point.”

Zachary Chavis, a portfolio manager at Sage Advisory Services, which has $12 billion of assets under management:

“Corporate bond issuance is historically lighter through April and volumes usually die down, so there is the risk that several headlines happening in tandem -- such as the attack in Syria and weaker-than-expected non-farm payrolls -- can potentially push bond spreads one way or the other. There are fewer people involved in the market in April to defend spread moves. Taking a bet either way is a tough call, especially since I think volatility will return as well.”

“Any stronger rhetoric out of Russia could mark the end of the ‘bromance’ between Putin and Trump, causing the risk premium to rise in Russian assets, which has come down since Trump’s election.

Oil prices spiked earlier due to concerns about Middle East supply. However, we note that Syria is a tiny producer, so unless this escalates further, the rally today will lose steam. The key mover for oil should still be inventory numbers and we still forecast Brent to move higher to $60 a barrel based on a decline in inventory.”

“It is too early to tell if the U.S. strikes in Syria have an impact on investing. As with all geopolitical events, investors should consider whether there is a meaningful impact on economic growth and the ability of companies to grow their earnings. At the moment, based on U.S. Secretary of State Rex Tillerson’s comments, this looks like an isolated action and not the escalation of conflict; thus, at the moment the market is taking this in stride since it does not seem to impact the positive fundamentals.”

“This will have an impact on public spending and sentiment. Defense is dependent on threat and obsolescence of equipment. This is going to reinforce the idea that there are still a lot of bad guys out there and why you really need defense.

It is extremely unlikely that this is going to escalate. I don’t think we are going to put boots on the ground. Boots on the ground is bad for defense, because the money that is used to support soldiers in the field generally comes out of things like paying for new technology development and production and things like that.”

“We’ve had a lot of information come at us this week, and in that context what’s happening in Syria is not that important to markets. On the margins, oil reacted. There’s always a little bit of a knee-jerk reaction in oil markets to some of the political risk in the Middle East.

The Russian ruble is weaker today, and it tells you how markets are positioned. It’s about positioning, more than fundamentals. The market is relatively long the ruble and part of that is the growth story in Russia, and the central bank being conservative. Because people are long Russian assets, there’s ruble risk. Is it a big move? No.’’