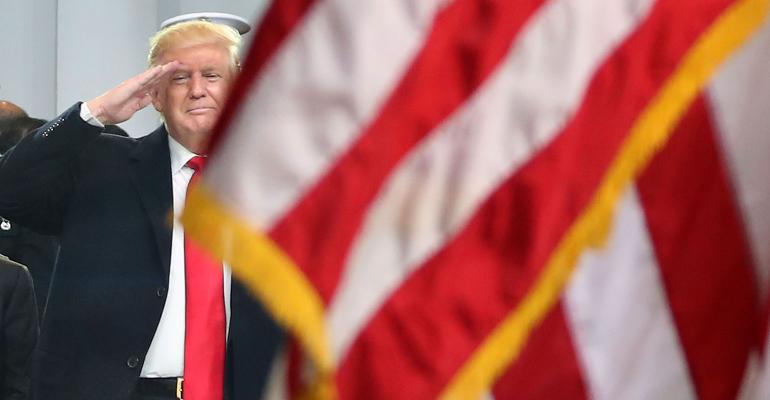 Trump’s trade war rhetoric has rattled the markets. Are advisors shielding their clients’ portfolios from the potential fallout?

With President Trump threatening an array of trade sanctions around the globe, some advisors are concerned about the impact a “trade war” would have on their clients’ portfolios. Talk of sanctions—some already implemented, others still being discussed—has added to the market’s volatility so far this year.

Nations have made it clear that if Trump acts against them, they will respond in kind. Much of the focus is on China, the world’s second largest economy and the U.S.’ biggest trading partner. The U.S. ran a $336 billion trade deficit, including goods and services, with China last year.

A protracted trade war with the Asian power would cause serious damage to the U.S. economy and financial markets, experts say. “Higher tariffs on China would act like a tax and likely raise the prices of various goods that we import,” says Michael Sheldon, chief investment officer at RDM Financial Group - HighTower in Westport, Conn. “That could hurt U.S. consumers. And if China responds to U.S. tariffs with their own round of tariffs, that would likely hurt U.S. exporters and reduce the outlook for U.S. corporate profits.” This obviously wouldn’t be good for stocks.

On the bond side, China is the largest holder of U.S. Treasurys, with $1.2 trillion as of February. China could dump a bunch of those bonds to punish the U.S., wreaking havoc in the fixed-income impact. But Sheldon and others say this isn’t a big worry, because any Chinese selling of Treasurys would almost certainly lower the value of the Treasurys they still own.

So what should advisors do to protect their clients’ portfolios from the effects of a trade war? At this point, not much, experts say. For one thing, it’s not clear how much of Trump’s trade threats are bark and how much are bite. For example, the White House still hasn’t decided all of the nations that will be exempt from Trump’s aluminum and steel tariffs.

“Depending on which countries are targeted, the effects could vary quite a bit,” says Karim Ahamed, an investment advisor at wealth management firm HPM Partners in Chicago.

The big unknown is China. Some administration officials believe that negotiations provides a better alternative to trade disputes than conflict, yet the president’s public commentary could follow a difficult path. The trade talks with China that concluded on Friday yielded nothing more than an agreement to meet again.

“We believe that the talk we have heard in recent weeks is the Trump administration negotiating and playing hard ball,” Sheldon says.  “Ultimately, we believe that calmer heads are likely to prevail, as both sides have a lot to lose.” On the services side, the U.S. actually has a trade surplus with China, $39 billion last year.

All the uncertainty has left Sheldon and his RDM colleagues cautious. “We have not made significant changes to our portfolios so far, because nothing has officially changed yet,” he says.

Tom Fredrickson, a New York City financial advisor who is part of the Garrett Planning Network, doesn’t expect to advise clients to change their investments regardless of what ends up happening on the trade front.

“I recommend people take suitable allocations and then stick with them, not trying to time their investments based on news,” he says. “If you buy and sell assets, you’re generating taxes and transaction costs.”

And if there is a definite trend for financial markets as a result of something like a trade war, it will likely already be priced into stock and bond markets before your clients can make their moves, Fredrickson says. “For most people it’s better to regularly rebalance and not try to get in and out of the market.”

For someone who wants to trade actively on news events, Fredrickson says a contrarian approach might work best. “Usually the market overreacts to bad news,” he says. For example, Trump’s incendiary remarks could hammer the stocks of U.S. exporters, and in some cases already have. So an intrepid investor might buy some of these stocks.

“But it’s very hard to be right on this,” Fredrickson points out. “I don’t want to be cute with my clients’ money, though I might try it for myself if I see something good sell off.”

While Ahamed agrees that the trade drama doesn’t merit major changes in investment strategy at this point, HPM is taking some steps to protect its clients. First, it’s adding exposure to long-short equity funds, in this case, The Neuberger Berman Long Short Fund (NLSIX). “Depending how negotiations go and who gets punished, this can be helpful for downside protection,” he says. “Even if there’s just a general market, decline, the short positions will provide downside protection and hopefully some alpha as well.”

Trump’s trade war rhetoric could be more hot air that rattles markets more than deflates them. So while you may not want to do a lot to prepare your client portfolios for the outcome, it might pay to do a just a little.