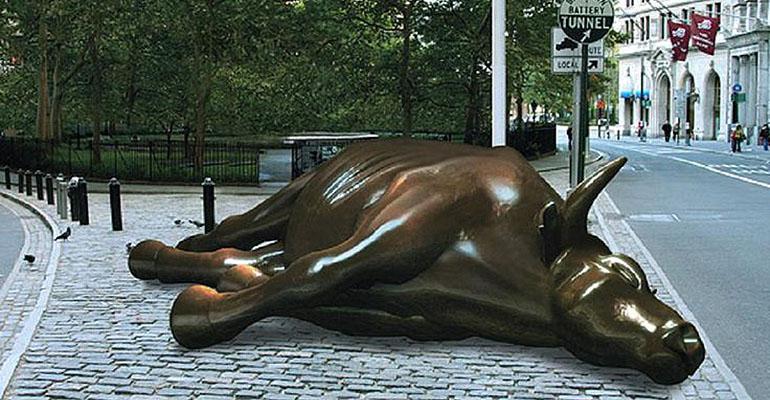 Tired Legs Under the Bull Market in Asset Prices

Data can provide hints as to whether to be worried or to ignore the hype.

(Bloomberg View) -- Stocks have soared since Donald Trump was elected president, continuing a trend of rising prices that began in 2009. The Dow Jones Industrial Average is at record highs. U.S. house prices are back to pre-crash levels. This naturally has a lot of people worried that financial assets are overpriced. If so, asset managers and investors should be shifting money into cash. Is this worry appropriate or overhyped? It’s always hard to tell with asset prices -- if they were predictable, it would be too easy to make money in the market. But data can give us a few hints, and theory can elucidate some of the reasons assets might be cheap or expensive.

Any model of asset pricing starts with a prediction of expected returns. Usually, people think of this as a historical average -- U.S. stocks have returned about 7 percent a year on average, in inflation-adjusted terms, since the 1870s. But assuming that the future will look like the past isn’t the best forecasting method. When the ratio of stock prices to fundamental values -- measured by corporate earnings -- goes way up, it tends eventually to come down. The reversion isn’t certain -- stocks can stay high relative to fundamentals for a long time, and the average ratio does change slowly over time. But in general, if the ratio of price-to-earnings is higher than normal, it means the expected returns from stocks are lower during the next couple of decades. This is the finding that won economist Robert Shiller the Nobel prize.

By this common measure, the Shiller cyclically adjusted price-to-earnings (CAPE) ratio, U.S. stocks look very overpriced right now. The ratio is higher than at any time except the height of the late 1990s tech bubble: Of course, a lot depends on how earnings are calculated, and on assumptions about the normal P/E ratio. There’s evidence that the normal level of the Shiller P/E has shifted upward. If this were the 1920s, we could expect a crash soon, but now the Shiller P/E probably just tells us not to expect stellar returns in the future.

Housing is a trickier case, since good national data has only been collected for a few decades. The ratio of prices to rents is still nowhere near its bubble levels, but it is above its long-term average, suggesting that expected returns in real estate probably won’t be spectacular.

Why are expected returns so unimpressive? One possibility is that risk has fallen. Lower risk would mean investors wouldn’t demand average returns as high as in the past. Risk is hard to measure, and can depend on many things. But measures such as the VIX -- the Chicago Board Options Exchange Volatility Index, which represents investors’ forecasts of U.S. stock-market volatility -- show only a small reduction in how risky investors think stocks are: These are basic measures; those who forecast returns and risk for a living would be able to give you much better, more nuanced numbers. But the general story will be the same -- the amount of reward an investor can expect for a given amount of risk just looks lower than in past decades.

What’s the reason for this long-term shift? Many of the forces that pushed up asset prices in past decades may have been temporary, one-off events.

For example, financial inclusion may have run its course, at least in the U.S. Before the 1980s, most pension funds were legally prevented from investing in most risky assets. That meant that stock ownership was mostly confined to rich people. But state-level deregulation in the 1980s and 1990s allowed these funds to put much more of their money in the stock market. Also, the 401(k) was created in 1981, and mutual funds and discount brokerages have become steadily more available. Those are all one-time shifts that increased demand for stocks by allowing middle-class households to put their money in the market. Similarly, the advent of mortgage securitization has increased the percent of people who can buy homes -- another one-time increase in demand.

A second factor is slowing global population growth. It isn’t just in the U.S. that the baby boomers are retiring. The number of children per woman has fallen dramatically all over the world:

That means fewer new investors and less total new wealth in the market.

A third factor is interest rates. When rates go down, asset prices go up, because the opportunity cost of investing in stocks and real estate goes down. But nominal interest rates can’t go much below zero, and in most rich countries, they’re already at or near that level.

In past decades, a population boom, an increase in financial inclusion and steadily falling interest rates could have conspired to produce one-time rises in stock and housing prices that won’t be seen again. This is old news to most asset managers, of course, but regular people need to understand that the era of easy gains in the asset markets are likely over.