/sites/all/themes/penton_subtheme_wealthmanagement/images/logos/footer.png
Recent
Recent
Looking Back at Amazon’s Very Big Year in Commercial Real Estate
Jan 25, 2022
Nine Must Reads for the CRE Industry Today (Jan. 26, 2022)
Jan 25, 2022
WeWork Buys Coworking Startup in First Acquisition Since Neumann
Jan 25, 2022
London Gets Back to the Office, But Bankers Drag Their Heels
Jan 24, 2022
Featured
The 10 Best and 10 Worst States in Which to Retire in 2021
Jul 15, 2021
Poll: 15 Classic Books on Investing and the Markets
Apr 03, 2020
25 U.S. Markets Adding the Most Multifamily Units This Year
Feb 03, 2021
Fifteen Must-Listen Business Podcasts for Advisors
Aug 14, 2020
International Investing
brought to you by 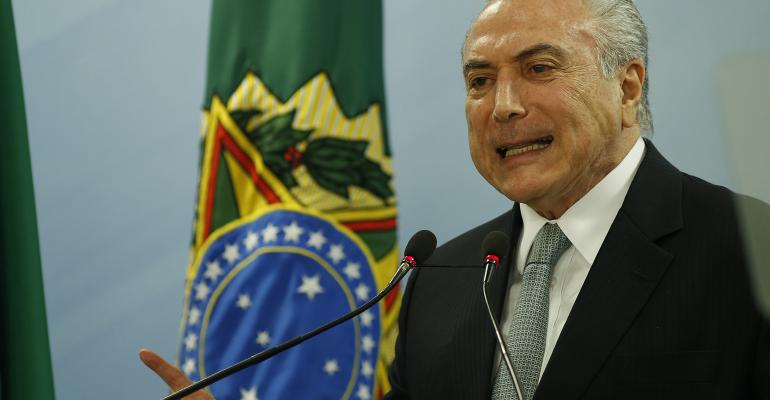 For These Die-Hard Investors, Now Is the Time to Buy Brazil

Amid Brazil's own political chaos, there are investing opportunities.

(Bloomberg) --For months, investing in Brazil has been a breeze. Buying into any asset class delivered some of the world’s biggest gains as traders cheered on President Michel Temer’s pursuit of austerity measures designed to rein in a ballooning budget deficit.

That changed abruptly Wednesday evening, following reports that Temer approved illegal payments to a disgraced lawmaker who had orchestrated the impeachment of his predecessor. Investors smelled a disaster in the making, and markets opened Thursday with a massive selloff of everything from the real to the Ibovespa to Brazilian bonds. Already, some brave fund managers are bringing out their calculators and looking for buying opportunities amid the chaos. Sure, they acknowledge, Temer might well be on his way out and his ambitious plans to rein in the pension system and change Brazil’s labor laws seem all but dead, but Latin America’s biggest economy still holds a lot of value for investors willing to put in the work.

“In the short term, this is negative for social security reform and for sentiment, but we’re the kind of fund that when prices fall, we’re more inclined to buy,” said Adrian Landgrebe, an emerging-markets portfolio manager at Sagil Capital in London. “We see some really extreme moves and those are the kind of things that we look to buy.”

Indeed, the tumble was stark. The real fell the most since 1999, the Ibovespa tumbled to the lowest since January and government bonds posted the biggest loss in emerging markets. And no one is saying the carnage is over. Temer stuck a defiant tone in a speech Thursday evening, saying he wouldn’t resign and denying any wrongdoing, dashing some investors’ hopes for a quick resolution. But the optimists say Brazil is a massive economy with a large middle class and abundant natural resources, and at some point it’ll regain its footing.

Brazilian assets had rallied over the past 18 months as investors gained confidence that the government would be able to tackle the excessive spending and low tax revenue that had resulted in the loss of its coveted investment-grade rating. The Ibovespa surged 69 percent in dollar terms last year, while the real strengthened 22 percent, the best performance in the world for both stocks and currencies.

Marcelo Assalin, who manages $8.5 billion as head of emerging-market debt at NN Investment Partners, said Thursday’s selloff was exacerbated by the fact that so many big investors were overweight Brazil and were quickly trying to unwind their positions. He said the outlook for markets is dependent on how fast an institutional solution takes shape.

“The time will come to search for good investing opportunities,” he said. “This is the time to be calm and wait for more clarity. Brazilian assets offer good value to investors who have a longer-term approach.”

Several analysts say that Ambev SA, the Brazilian unit of the world’s largest brewer, Anheuser-Busch InBev, could be a good stock pick. Deutsche Bank AG wrote in a note that the beermaker’s currency hedges would help protect it from a weaker real, and Morgan Stanley strategist Guilherme Paiva also cited it as a good value.

Fibria and its rivals Suzano Papel & Celulose SA and Klabin SA were some of the few bright spots among Brazilian stocks Thursday, rallying on speculation that a weaker currency will boost their competitiveness by making their exports cheaper in dollar terms.

Vinicius Pasquarelli, an emerging-market debt trader at Fynsa International in Santiago, said the selloff in bonds from state-controlled oil producer Petroleo Brasileiro SA makes them look like a good buy.

“When a country like Brazil faces a scenario of political risk as strong as this, a good strategy is to take advantage of low prices to get active in the best credit stories,” he said.

Perhaps the unlikeliest recommendation to emerge from Thursday’s carnage was to buy bonds from the company that helped cause all the chaos, JBS SA. The allegations that Temer approved payoffs to buy the silence of lawmaker Eduardo Cunha stemmed from leaked testimony by the meatpacking giant’s executives.

The executives’ plea deals signal JBS is closer to putting the scandal behind it, according to Ian McCall, who manages $185 million in emerging-market assets at Quesnell Capital in Geneva. He recommends notes from the meatpacker and its Eldorado Brasil Celulose SA offshoot.

Jim Barrineau, the co-head of emerging markets debt for Schroder Investment Management, said he was sticking with bets on bonds from Petrobras and JBS on the view that as more of the corruption details leak out, the less risk there are for new damaging revelations.

“The cloud on top of JBS and Eldorado can begin to lift,” said McCall, who added that he was fully aware of the irony of his recommendation. “For those two names, the events of the past 24 hours can turn out to be quite constructive in the longer run.”