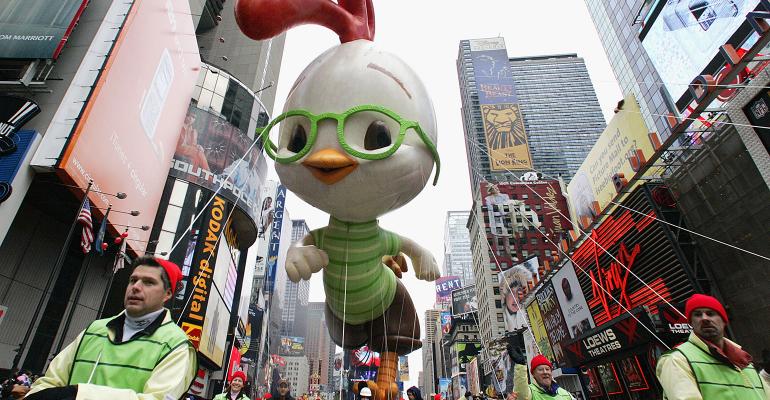 At a time of complacent markets and low volatility, doomsday prognosticators can inflict enormous harm on investors.

(Bloomberg Prophets) --Volatility has declined very sharply, so quite naturally, pundits suggest that investors are complacent and conditions are ripe for a nasty surprise. Such warnings deserve harsh criticism. First, volatility should be down, given the performance of the economy and markets. Second, focusing on volatility encourages short-term thinking, which is extremely harmful to investors trying to achieve their long term goals. Third, it is entirely useless to warn against a potential market decline when the warning is provided without any kind of time framework.

High volatility is a normally occurring, yet unpredictable, event, at least insofar as timing is concerned. Market declines of 10 percent occur almost annually, and even multiple times within a calendar year. This is simply within the normal range of historical volatility. Yet when it happens, some pundits go wild, suggesting the drop is just the first leg down of a much larger decline. In fact, several such declines have occurred since March 2009, yet the market has risen more than 200 percent off that low. When the decline proves to be temporary, such negative market commentary disappears temporarily, waiting for the next opportunity to warn of another bout of market volatility. Or, they forecast that the decline in volatility demonstrates that investors have become complacent and vulnerable.

Why shouldn’t the markets be complacent right now? Economic growth has been on an incredibly consistent, yet moderate 2 percent trajectory for some years. Unemployment is less than 5 percent, down  from 10 percent in 2009. Corporate profits are rising again, after faltering due to a large slowdown in the oil patch following the big drop in crude prices. That took inflation close to zero, which some pundits suggested would start a problematic bout of deflation. Instead, it proved to be just a temporary interlude before prices converged to the higher “core”, which declined only slightly. Now, both are reverting to 2 percent, which has enabled the Fed to start gradually normalizing interest rates.

I would care little about these Chicken Littles and their desire to instill fear in the hearts of investors for their purposes, except that they inflict enormous harm on individual investors. How often do retail investors read such warnings and decide that to be safe, they should reduce their exposure to the market? Some pull out entirely. It happens far too frequently. I know of one individual, a close friend of a client, who converted his entire portfolio into cash late in 2008 and has been unable to bring himself to buy back in to this very day! For years now, he thinks he’s missed the recovery, because he’s read warnings that stock prices are high and vulnerable.

In 2009, as the market rallied, some pundits warned of the dangers of the “dead cat bounce” and that prices would decline again, particularly since a double dip recession was likely. Indeed, I recall double dip recessions being forecast after EVERY recovery, yet in my long professional career, we have never experienced one.  But, it makes for good fear mongering material. In fact, estimates of high household cash positions suggest that investors are afraid to get back in stocks. Peter Lynch, the great stock manager of Fidelity’s Magellan Fund, once commented that he stopped reading market stories over the weekend, because it prevented him from buying stocks and making good investment decisions on Monday morning when he got back to the office.

Indeed, fear mongering has grown to the point it has become an art form and a profession. Eliot Janeway was the first. He was always predicting the coming next Depression. It didn’t happen, but that didn’t prevent him from selling his newsletter and earning a very good living from predicting gloom and doom. Many others have followed in his footsteps. Almost every year, someone writes a book that makes the best sellers’ list forecasting the coming Depression. Most every website has an ad predicting doom and encouraging readers to click to the site to read more.  There is a very long list of people -- the industry refers to them as perma-bears — who are quoted regularly in the media warning of the next market decline or the next market collapse. In mild form, they now merely suggest investors have become complacent. But are they really forecasting anything, or are they just promoting fear?

Most of the forecasts of gloom and doom come without an expiration date. The authors expect a large bear market, but don’t provide a clear indication of when doomsday is expected to arrive. Of course, this makes such views evergreen, since they never expire.  And if they are repeated often enough, the prediction remains comfortably off in the future without any effort to change the text of the forecast. How convenient is that? Even so, some forecasters do provide dates. That seems to be helpful for selling books, but it also creates the obvious potential to be badly and very visibly wrong. But at least one author, Ravi Batra, despite being wrong with his depression forecast, wrote a sequel. He projected another depression, of course. I haven’t seen a follow up to that sequel, as yet.

Investors need to focus on their long-term investment objectives and to ignore the short-term hype. Yes, volatility happens, frequently, in fact, but it only gets in the way if investors react and pull out, which invariably happens only after the market goes down, since no one truly anticipated it. When an investor buys stocks, they are making a bet on the growth of the U.S. economy. Where else would you have greater confidence investing?