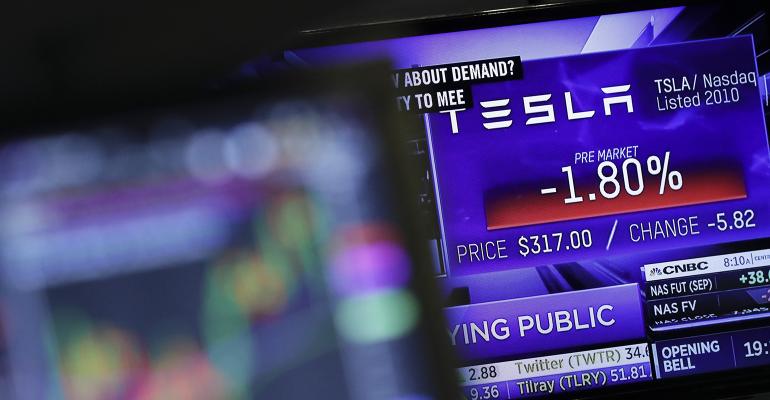 Even though direct indexing remains a nascent part of the asset-management industry, the buzz is building.

(Bloomberg) -- When the world’s most-famous electric car maker finally joins the S&P 500, it will be bittersweet for investors with about $11 trillion in funds tied to the gauge. Their benchmark-hugging bets get some Elon Musk magic at last, but they pay seven times last year’s price for the privilege.

Given the chance, how many would have added Tesla Inc. to their index exposure in January? Or even June, when the shares had merely doubled?

Customization is at the heart of a red-hot investing strategy driving two of the biggest deals in asset management this year. Known as direct indexing, it blurs the line between stock-picking and benchmark-following and now commands about $300 billion after its popularity surged in recent years.

The idea is simple: Instead of buying shares in a fund that slavishly holds all the companies in an index, investors buy those stocks directly. The index exposure is broadly the same, but the investors are no longer wedded to it. They can make tweaks -- like adding a skyrocketing automaker well ahead of the S&P 500, for example.

“The Tesla issue of the last few months is probably highlighting for the first time to a lot of people that the S&P is not the largest 500 companies,” said Elya Schwartzman, founder of ES Investment Consulting LLC. With direct indexing, “you can just create your own index and say, look I want the largest 600 companies by U.S. market capitalization,” he added.

Direct indexing is a modern twist on separately managed accounts, which have been around for years and are used to build bespoke portfolios for wealthy individuals. The age of zero-commission trading and growing use of fractional shares means similar strategies can now be deployed for smaller investors.

It remains a nascent part of the asset-management industry, but the buzz is building. Morgan Stanley’s $7 billion purchase of Eaton Vance Corp. is all about direct indexing -- the latter’s Parametric Portfolio Associates is the largest provider in the field. BlackRock Inc. this week announced a $1 billion takeover of Aperio, a creator of tailored index strategies.

As dramatic as the Tesla example is, the real selling point for direct indexing may turn out to be the ability to remove companies from a portfolio’s exposure rather than add them.

In the drive toward investments that meet environmental, social and governance criteria -- which also happens to be one of the tailwinds for Tesla -- huge disagreements exist over exactly what qualifies. Direct indexing allows an investor to make adjustments according to his or her own views, and remove companies not up to scratch.

Read more: Record Flows Pour Into ESG Funds as Their ‘Wokeness’ Is Debated

“Having this additional need for customization is really where we get involved,” said Jeff Brown, director of institutional portfolio management for Parametric. “If I want market exposure, there are quick easy ways to get it through an ETF, but if I want to customize in any way, shape or form that doesn’t exist in the ETF space, that’s where we can step in to fill that gap.”

That kind of flexibility comes with a price, however. While fierce competition among brokers and asset managers has driven down trading costs across the industry -- boosting direct-indexing products in the process -- they still typically charge about 0.15%-0.35%.

That’s less than an active mutual fund, but three to five times the price of some equity exchange-traded funds. The fee for the Vanguard Total Stock Market ETF (VTI) is just 0.03%, for example.

“If direct indexing is going to experience another leg of growth, it’s going have to fan out further to the mass affluent market,” said Ben Johnson, Morningstar’s global director of ETF research. “It’s going to have to be achievable at a lower entry point.”

Until recently, direct indexing tended to be the preserve of high net-worth individuals, according to Tom O’Shea, director of managed accounts at Cerulli Associates.

The investing approach offers a huge tax benefit because investors have more losses which they can use to offset gains. ETFs famously do this as well, but direct indexing lets an investor utilize it at an individual stock level, which is estimated to add between 1 and 2 percentage points a year to returns.

Making the most of that traditionally required a large number of securities owned outright, putting it out of reach of the average investor. But improving technology and fractional shares offered by brokerages like Charles Schwab Corp. and Robinhood are changing things.

“You’re able to do the same thing with a smaller portfolio,” said O’Shea. “You can have 200 securities, but you don’t have to have as much money.”

A recent study from Cerulli found that 67% of asset-management firms believe direct indexing presents the most-immediate opportunity to manage for both tax and ESG factors, so it’s no surprise to see big names making moves in the industry.

The world’s largest asset-manager, BlackRock, said in its third-quarter earnings call that it plans to invest heavily in its separately managed account business. The Aperio purchase will bring its assets in that area to more than $160 billion, the company said.

Alongside that and Morgan Stanley’s deal for Eaton Vance, Charles Schwab acquired a firm called Motif this year that offers direct indexing. Schwab CEO Walt Bettinger II has said the strategy will play an important role in the future of the company.

Yet there remains plenty of skepticism that growth can meaningfully accelerate.

Even customizing to include the surging Tesla ahead of the S&P 500 can’t beat the pure cost-efficiency of an ETF, according to Morgan Barna, an analyst for Bloomberg Intelligence.

VTI, which includes Tesla, has only delivered fractionally better performance this year than State Street’s SPDR S&P 500 ETF Trust. Meanwhile, for all the hype, the ESG investing phenomenon remains in its infancy.

That could be one reason why industry leader Parametric’s direct-indexing inflows total only $15 billion for the past year, while inflows to the ETF business at BlackRock -- the largest issuer in the space -- total $126 billion, according to data compiled by Bloomberg.

“The incremental return would have to be much higher from the sum total of your custom choices to make it worth it,” said Barna. “People who felt really strongly either bought Tesla directly outside their index exposure” or bought a broader ETF, where the carmaker was included, she said.