/sites/all/themes/penton_subtheme_wealthmanagement/images/logos/footer.png
Recent
Recent
Macquarie Alum’s GreenPoint Eyes $1 Billion for Real Estate Bets
May 18, 2022
The Stephen and Kevin Show: All About Financial Advisor Podcasts
May 18, 2022
11 Must Reads for the CRE Industry (May 18, 2022)
May 17, 2022
Apple Delays Plan to Have Staff in Office Three Days a Week
May 17, 2022
Featured
The 10 Best and 10 Worst States in Which to Retire in 2021
Jul 15, 2021
Poll: 15 Classic Books on Investing and the Markets
Apr 03, 2020
Fifteen Must-Listen Business Podcasts for Advisors
Aug 14, 2020
Celebrity Estates: Jay Leno and Planning for Classic Car Collections
Feb 22, 2022
The Market's Measure
brought to you by 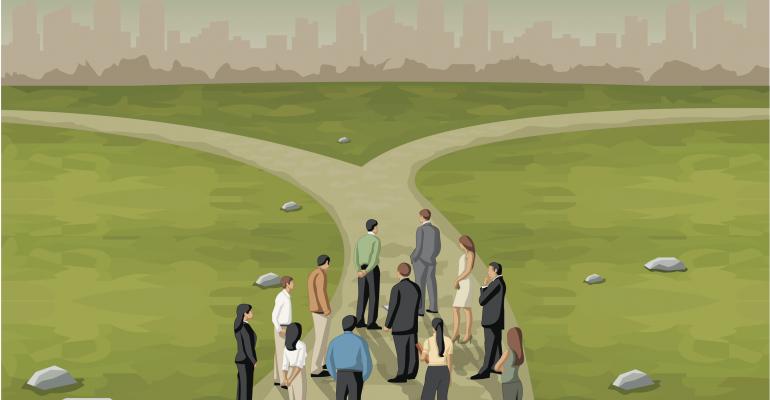 Technical Analysis: Forks In The Road

Safe haven buying of Treasurys and the dollar could be deflationary.

Here’s a not-so-surprising tidbit: I’m not a Yankees fan. Never have been; probably never will be. Don’t get me wrong. I’ve always respected the Boys from the Bronx.  I’ve held some Yankees in very high esteem, in fact, most particularly Yogi Berra. Not so much for his playing and managing skills but more so for his ability to deliver tortured and screamingly funny prose to ink-stained wretches like me.

My interest in one of Yogi’s pithier malaprops has been piqued recently. I stare at it constantly because it became the title of a book that’s been on my shelf since 2001. Back then, with the help of author Dave Kaplan, Yogi penned a third collection of life lessons called “When you come to a fork in the road, take it.”

So why my renewed interest? Because of a “fork in the road” I laid out in my April article, “What To Do About Inflation Risk” The “fork” was really a symmetrical triangle being traced in the Daily Inflation Index chart. Such patterns often presage dramatic price moves beyond their converging support and resistance lines. Inside the wedge, index readings were trending in an inflationary direction, so I fearlessly painted a year-long breakout window from the wedge through February 2015.

Well, we finally got the breakout in July. Instead of breaking to the upside, toward inflation, though, the index shot through support in a deflationary (disinflationary?) direction. My bad.

Recall, however, that I laid odds for movements past the “fork,” er, window. “Nothing in technical analysis,” I said, “is absolutely certain.” With then-current index volatility, I forecast the probability of an inflationary move at better than 2-in-3 over the subsequent 12 months.

The fly in the technical ointment’s been safe haven buying of U.S. Treasury securities in the wake of the Ukrainian and Iranian crises. If the global situation continues to unravel, the index could decline to levels last seen at the nadir of the Great Recession in the winter of 2008. Could, mind you.

Stay tuned; I’ll get back to you with the new odds.