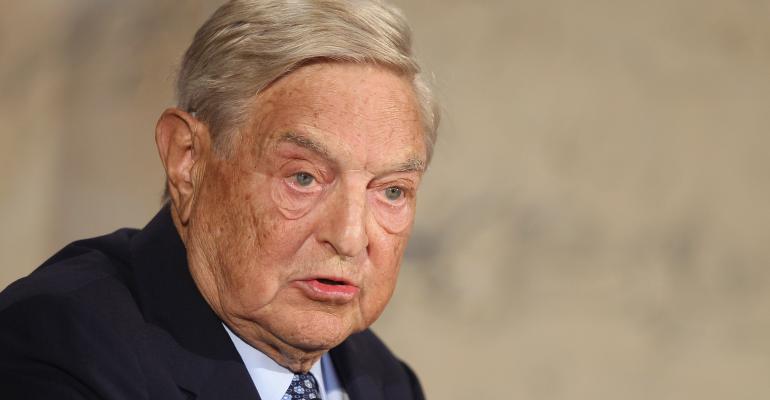 <p>If you have as much money as George Soros, then you can invest like him.</p>
Investment>Equities

Sure, Invest Like a Billionaire, If You Are One

That seems to be the advice coming from the moneyed set these days. Not just one or two cranky billionaires, but many of them; Warren Buffett seems to be a notable exception.

In a commentary sent to clients last week, Nick Colas, chief strategist at Convergex, pointed out that “many of the smartest investors out there hate stocks.” Specifically, he notes the following billionaire market calls:

Stan Druckenmiller (May 4, Sohn Investment Conference): “Get out of the stock market.” George Soros (June 9, Wall Street Journal): “The billionaire hedge-fund founder and philanthropist recently directed a series of big, bearish investments, according to people close to the matter.” Carl Icahn (June 9, CNBC): “I don’t think you can have (near) zero interest rates for much longer without having these bubbles explode on you”; he also said it’s difficult to assess when exactly that might occur. Jeff Gundlach (July 29 interview with Reuters): “Sell everything. Nothing here looks good.” Bill Gross (in his monthly investment outlook for August): “I don’t like bonds; I don’t like most stocks; I don’t like private equity.”

Generally, you probably don’t want members of this group on the opposite side of your trades. Colas reminds us of that old Wall Street saw: “You should never argue about markets with a guy who is much richer than you.”

That may be a valid point, but there is a much more interesting one to be made: Maybe you shouldn't follow the trading advice of billionaires if you aren't one.

Finance history is replete with terrible market calls by very wealthy people (e.g. Tony Robbins channeling Paul Tudor Jones). Merely pointing that out would be anecdotal and outcome-focused -- two of my least favorite ways to think about markets. Instead, I urge you to instead consider your own goals and motivations, which are probably very different from those of billionaires.

Consider the obvious: Most investors have very specific financial objectives. Typically, they're along the lines of saving for retirement, buying a home or paying for their kids’ college education. The average trader is not especially concerned with promoting a particular company, cementing their legacy or making an adversary's life miserable, as Icahn did to Bill Ackman over Herbalife. Yet those are very real examples of what motivates some billionaire investors. Rest assured, at the very least, they are not using their 401(k)s to effect those goals.

Druckenmiller, Soros, Icahn, Gundlach and Gross -- all legendary investors -- are not trying to accomplish the same things with their portfolios that you are likely aiming for with yours. If the end goals are so very different, perhaps blindly following them into or out of a trade is not the greatest of ideas.

Consider Kirk Kerkorian’s 2007 bid for General Motors. There were plenty of investors who looked no further than Kerkorian’s long track record of great trades and blindly followed him into GM. At the time, I raised all sorts of questions about Kerkorian’s motivations: At 90 years old, could he really turn GM around? He had made earlier investments in GM and was perhaps trying to salvage his legacy after what was looking like a previous bad play.

Kerkorian eventually sold his 9.9 percent stake in GM at a modest loss, six months before the automaker declared bankruptcy. The investors who had followed him -- and failed to exit when he did -- lost 100 percent on that trade; they likely lacked his ability to shrug off that loss.

Beyond having more money, billionaires simply invest differently from you and me because they have very different goals and objectives.

One particularly loathsome example I recall involved a news release about then-CEO and founder Michael Dell buying $70 million worth of Dell stock. At the time, Dell was the fourth-richest man in the U.S., with net assets of about $20 billion. Dell’s server business was under assault from Hewlett-Packard, along with weak retail marketing and “enormous quality problems”; the stock had taken quite the beating after the tech bubble popped in 2000, and it never quite recovered.

While $70 million sure sounds like a lot of stock, to a $20 billion dollar portfolio, it is a meaningless pittance -- it’s a third of a percent or so. To the investor with a million-dollar home and a $3 million-dollar portfolio, it’s the equivalent of buying 100 shares of Apple. Is it possible that Michael Dell, with his namesake company under intense pressure, had a different agenda than mere capital appreciation?

The bottom line is that billionaires can and do make specific investments for reasons that have nothing whatsoever to do with saving for a house, putting together a college fund for their children, or making sure they have a financially secure retirement. At times they are propping up a weakened company, creating a personal legacy or stroking their own egos. Their different objectives likely mean that following their trade recommendations may not work out well for you.