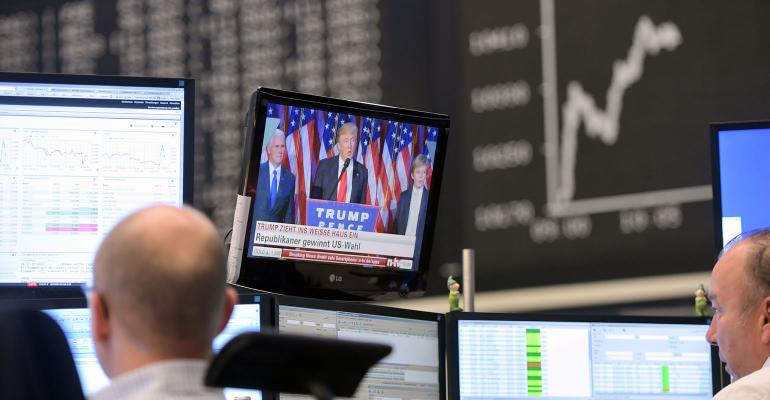 The S&P 500 has limited potential for returns over the next couple years compared to European equities.

(Bloomberg) --The chorus of strategists and investors rooting for European stocks over their U.S. peers is getting stronger.

While U.S. equities led the reflation rally that began in November, those seeking sanctuary from lofty stock valuations are gravitating toward Europe for cheaper bargains as the trade matures. Strategists at Deutsche Bank AG urged investors this week to cut holdings in U.S. stocks in favor of the region’s shares, along with BlackRock Inc.

While the S&P 500 has repeatedly scaled new records in the current rally, the Stoxx 600 remains below its April 2015 peak, leaving more room for gains. Strategists see the advance picking up momentum after the French election.

“Europe is a great leveraged play on global reflation,” Rupert Harrison, a multi asset strategies portfolio manager at BlackRock, said in an interview with Bloomberg TV on March 27. “We’ve been reducing our U.S. equity exposure partially because we thought expectations were a little too high. The data from Europe is still pretty strong -- there’s more value and still more momentum.”

Morgan Stanley equity strategists raised their 2017 earnings-per-share growth forecast for the MSCI Europe Index on Monday to 16 percent, from a previous projection of 12 percent, and lifted their 12-month price target to 1650, a rise of about 7 percent from the current level.

“The macro news flow has been better than we have been expecting in our base-case framework and supportive of our reflationary outlook,” Morgan Stanley strategists led by Graham Secker wrote in a note.

The S&P 500 has limited potential for returns over the next couple of years, in contrast to euro-area equities, which are trading at a 47 percent discount to their U.S. counterparts on price-to-book value, according to Societe Generale SA strategists led by Charles De Boissezon. That compares with a 40 percent discount over the past ten years.

“The better economic and inflation outlook, mixed with an expected drop in policy uncertainty after the French election, should make the region strongly appealing,” the strategists wrote. Italian stocks, in particular, look cheap, according to SocGen, which predicts the FTSE MIB Index will jump 21 percent to 24,500 by the end of next year.

European investors have the means to increase bullish positions once political risks retreat, according to a Bank of America Merrill Lynch investor survey conducted this month. A net 22 percent of fund managers in Europe are overweight cash -- up from 13 percent the previous month -- compared with 18 percent globally.

What’s more, a net 23 percent of global fund managers believe European stocks are undervalued, compared with 81 percent who think U.S. equities are too pricey -- the largest expression of valuation fears in more than 20 years.

Despite a run of positive corporate and economic data, net inflows into European equity funds this year have been relatively paltry: $245 million, as of last week, compared with $32 billion for U.S. stocks, according to Bank of America Corp., citing EPFR data.

French election risk “has been overhanging European assets for some time now,” BlackRock’s Harrison said. “We like that risk. Le Pen is very unlikely to win the French election,” he said, referring to the far-right presidential candidate whose electoral prospects have tempered investor enthusiasm for European exposure.

That means risk appetite has room to grow, with 68 percent of European fund managers in the Bank of America survey foreseeing positive economic momentum over the next year, while only 32 percent see downside risk to consensus earnings estimates, a two-year low.

In a sign of what may happen if French political risks abate, European benchmark indexes have outperformed the S&P 500 after the center-right emerged victorious in the Dutch election, seen as a bellwether for the strength of populist parties across the region.

With a slew of earnings upgrades and rising share-price targets, the valuation argument for European stocks relative to their U.S. counterparts is hard to ignore. The relative price-to-earnings ratio of the euro area to the U.S., for example, is about one standard deviation below its long-term average, according to Christoph Riniker, Zurich-based head of strategy research at Julius Baer Group Ltd -- another strategist who upgraded the region to overweight this week while downgrading U.S. stocks.

“Investors appear to be pricing in recession in the euro area, despite the recent acceleration in economic indicators,” Barclays Bank Plc. equity strategists led by Keith Parker, noted. “We see euro-area equities as the most attractive risk-reward value near-term.”

Still, skepticism over the euro-area’s economic recovery may continue to temper investor enthusiasm, according to  Andrew Sheets, Morgan Stanley’s chief cross-asset strategist. “There is a lot of skepticism, even with the recent improvements in economic data and corporate profits.”