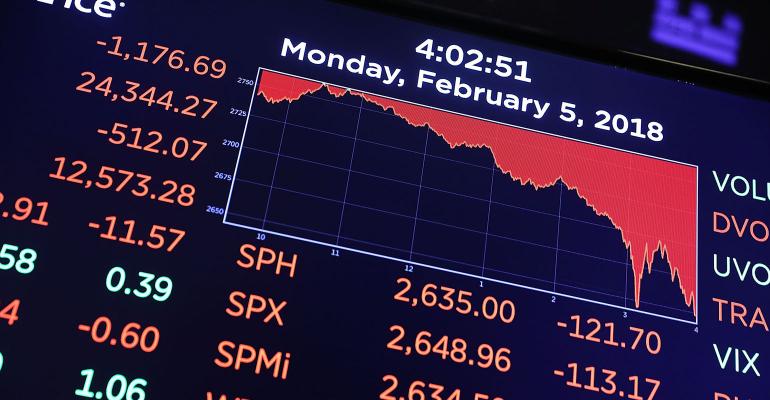 The Stock Market Is a Lot Like Bitcoin Now

No, Mr. President, the markets' ups and downs have nothing to do with you.

Last year, Marko Kolanovic, global head of quantitative and derivative research at JPMorgan, estimated that stock pickers -- those who trade on stock-specific fundamentals -- account for just 10 percent of today's stock market trading volumes. Some 60 percent of trading -- twice the share of 10 years ago -- is "passive and quantitative investing." Nearly half is high-frequency trading by algorithms; though its share is down from the 2009 peak, it's responsible for pretty much all of the stock market's volume gains this century.

The industry and its regulators have accepted this because the algorithms have been shown to improve market liquidity as they search for speculative opportunities. It's highly likely, however, that the algorithms -- though they're supposed to do a better job of trading on publicly available information than humans do -- have caused the stock market to decouple from important information streams that existed in a human-dominated market. As Thierry Foucault and Sophie Moinas of Toulouse School of Economics wrote in a paper published last month,

High frequency traders' ability to quickly extract signals from order flows (trades and price changes) could increase the rate at which informed investors' informational advantage ("alpha") decays. If this is the case then high frequency trading might reduce the profitability of producing fundamental information and thereby make asset prices less informative about firms' future cash flows in the long run.

In a sense, thanks to the algorithmic shift, the stock market has become more like the one in bitcoin, also driven largely by algorithmic trading. It's not that the assets in such markets don't have a fundamental value -- bitcoin does, too, insofar as it allows anonymous transactions that are not transparent to the authorities. It's just that the fundamental value matters far less than speculative opportunities, which computers, with their superior ability to analyze statistics, can detect better than humans. Relying primarily on information that can lead to short-term gains means, essentially, feeding on what the rest of the market is doing to a greater degree than a human investor does.

Existing research is inconclusive on whether algorithmic trading increases volatility: Some recent studies have found that it does, some that it doesn't. If algos do induce greater price fluctuations, though, there's a strong ripple effect these days since there's a large market in volatility-linked instruments -- a market that is far removed from stock and economic fundamentals. There are indications that unraveling bets on the volatility index contributed to the current stock market plunge.

Trump appears to hold an old-fashioned view of the stock market, linking its performance to investors' expectations about the economy and how companies will do. That explains the White House's reaction to the stock market drop: Trump's press secretary, Sara Huckabee Sanders, said the "president's focus is on our long-term economic fundamentals." That's a good focus for a policymaker to have -- but he should also be aware that the stock market is not a good indicator of success or failure. It's increasingly a thing in itself.

That has even bigger implications for ordinary Americans than for Trump. Some 54 percent of them invest in equities directly, through mutual funds or 401 (k) plans. Shares make up some 35.5 percent of U.S. households' total financial assets, compared with 20.7 percent in France and about 11 percent in the U.K. and Germany. Americans are more exposed than people in other big, rich nations to a market that, today, is not closely linked to the fundamental value of assets that are traded in it. A significant share of their wealth depends on a somewhat bitcoin-like trading environment.

Leonid Bershidsky is a Bloomberg View columnist. He was the founding editor of the Russian business daily Vedomosti and founded the opinion website Slon.ru.