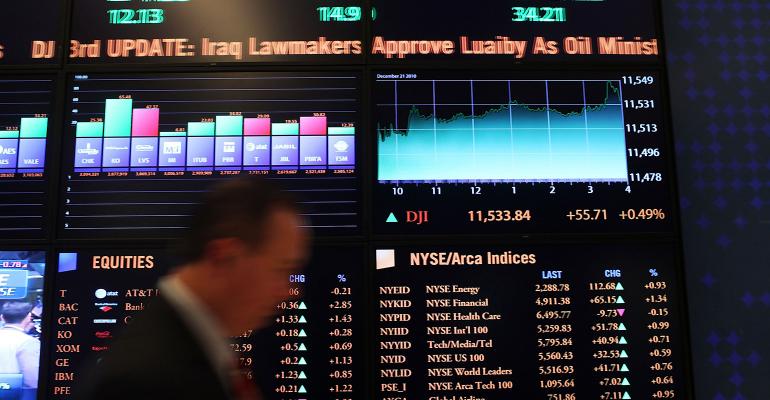 "Disruption" might be a buzzword now, but it's nothing new.

Around the time of the S&P 500’s launch in 1957, American composer Cole Porter wrote Anything Goes, a song for a musical of the same name. It began with the words “Times have changed,” and the song painted a picture of a new America: one of free spirits, fast cars and bare limbs as it poked fun at the past. It sounds antiquated now, but it shows how much change was happening and what has changed since.

The S&P 500 reflects change in another way: that of corporate America. If there’s one thing to learn from the era since the S&P 500’s birth, it’s that change is inevitable. Investors may want to take note here. “Disruption” might be a buzzword now, but it’s nothing new.

The S&P 500 has always reflected this. When the index turned 50, only 86 of the original 500 companies had survived the list. These included Boeing, Colgate-Palmolive, Hershey, Pfizer and United Technologies, but once great names like U.S. Steel and Union Carbide disappeared.

Investors who took a more passive approach to investing in the index may have experienced some short-term gains, but may have lost out on potentially greater returns in the long run. Identifying companies that will make it and stay on the S&P 500 isn’t a light task. In the heyday of Eastman Kodak, how many would have foreseen the company’s undoing?

Founded in 1880, Eastman Kodak was a constituent in the original S&P 500. It created one of the first digital cameras in 1975 and its profits peaked at $2.5 billion in 1999. But it didn’t adjust to the advent of digital photography and this ultimately became its downfall. Having emerged from bankruptcy, the company has struggled to regain a foothold in a world that has changed vastly around it.

On average, 22 companies (about 4.4 percent) are added or removed from the S&P 500 index each year. For those that manage to stay on, rankings can fluctuate. One day you might be on top, the next you’re on the bottom. In 1987, IBM was the most valuable company on the S&P 500. Ten years later it had fallen to 10th place, replaced at the top spot by GE. Today, Apple takes the top spot, and IBM has fallen out of the top 10.

While staying on the index for 60 years is a recognizable achievement, investors may benefit more by capitalizing on potential newcomers to the S&P 500 — for instance, companies that might be small caps looking to grow into large. Since 1985, the forward price/earnings multiple for the Russell 2000 has traded at a 7 percent premium (average) to the S&P 500. In December 2016, that premium expanded to almost 10 percent. However, as new earnings forecasts are revised upward to incorporate the potential for lower taxation and higher interest rates, that multiple is now closer to historical norms.

At a fundamental level, it’s the companies that can make substantial profits from the products or services they offer. When the S&P 500 turned 40 in 1997, companies needed a market capitalization of at least $100 billion if they were to secure a spot in the index’s top 10. For the first time, every company in the top 10 that year had market capitalizations of $100 billion or more. Microsoft and Exxon Mobil made the cut. The former was not on the original 500 from 1957, the latter was.

The movements of companies within, in and out of the S&P 500 are partly a reflection of what’s happening in America and beyond. Three of the top 10 companies in the index now are IT companies that didn't even exist when the index was created.

One tangent about internet companies is that they don’t manufacture goods or provide services in the traditional business sense. Amazon sells products, but it makes relatively few of the products that it sells. Facebook provides services, but rarely do any of its users speak on the phone with a customer representative. These reasons may influence why such companies have been able to grow quickly and work efficiently, as they’ve been able to go without resources that can be expensive and time-consuming to manage.

Having a strong product or service doesn’t guarantee any kind of security in the index. Constant innovation is the one trait that consistently successful companies possess. Innovative characteristics often mean that a company isn’t afraid to try new things, learn new skills and scour the world for top talent. In a saturated corporate landscape rife with unpredictability, innovation and the ability to continue disrupting its own success is what separates consistently successful companies from the rest.

The lesson for companies looking to stay in or make it into the S&P 500 is to avoid complacent thinking, or imagining a reversion to the good old days if they’ve lost their luster. For their sake, it could be the difference between staying on the S&P 500 and getting thrown off. Future success isn’t always secure, as the S&P 500 shows. Investors who stayed too long in the index as a passive investor may have ridden some companies all the way to the bottom instead of capitalizing on the ones that have had more successful journeys. As Cole Porter put it, “that gent today, you gave a cent today, once had several chateaux.” But if you take an active stance and research that gent, maybe you would’ve seen it coming.