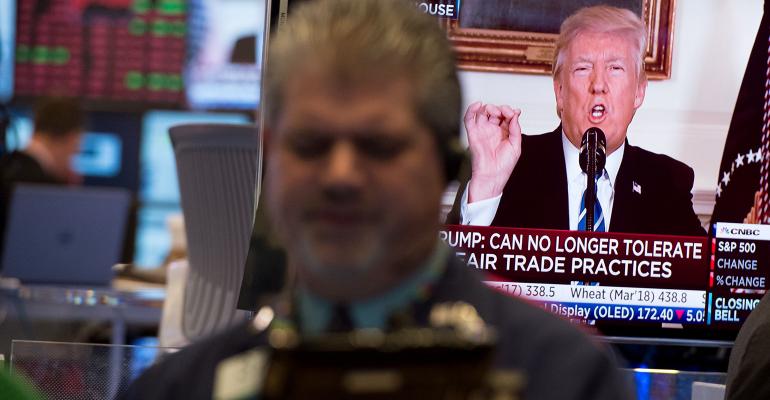 There's no denying that some of President Trump's policies have helped boost stocks during his first term in office.

(Bloomberg) -- In the 1,456 days since Donald Trump was elected president, corporate taxes were cut, a trade war was fought, the Covid-19 pandemic raged -- and the largest American companies added near $9 trillion in value.

Up 55% since Election Day 2016, the S&P 500’s return is the fourth-best for a first-term president, data compiled by Bloomberg show. It’s a feat that appeals to a president who has graded and flaunted his success using points on the Dow Jones Industrial Average, often to the exclusion of other measures.

Numbers don’t lie, but deciding how much credit he deserves for the run is one of the most debated topics in markets. Trump’s corporate tax cut indisputably buttressed bottom lines, but monetary policy has also been extraordinarily accommodative during his administration. The president inherited a booming economy from Barack Obama, whose terms coincided with only slightly smaller gains in the S&P 500 than his successor. In the end, stocks did what they almost always do over any period as long as four years -- go up.

“Whether you’re talking Obama or you’re talking Trump or whoever, it’s hard to link that back to a president,” said Nathan Thooft, Manulife Investment Management’s head of global asset allocation. “They’re just one person among many people that are making decisions at the governmental level, let alone all the non-government related things that are actually driving the stock market.”

Below are views from professional investors on how to frame Trump’s role in the market over the last four years.

During Trump’s term, says Brian Nick, chief investment strategist at Nuveen, a friendly Fed inspired confidence, and valuations played a large role as well. As far as stock prices are concerned, the president deserves credit for slashing the corporate tax rate in early 2018, which allowed stocks to overshoot where models might have shown they would end up after four years.

But Nick points to another corner of the market -- the technology sector -- as evidence no single human was responsible for the runup. American companies like Apple Inc. and Facebook Inc. were already large going into Trump’s presidency, but they’ve since firmly entrenched themselves as market leaders.

“These megacap companies continue to out-earn the rest of the market,” said Nick. “So a lot of the return -- especially this year -- has come from this small handful of companies. And I don’t think you can say there was a Trump policy that necessarily helped. It was just this was sort of what the economy has turned into in the U.S.”

The Trump administration has relaxed many regulations over the last four years, rolling back, for instance, restrictions on offshore oil and gas drilling and scaling back environmental rules.

Though it’s tough to quantify the direct impact on stock prices, the loosening has been a key driver of returns, says Anik Sen, global head of equity at PineBridge Investments.

“The less friction or the less regulation there is in capital markets, markets like that because it means capital can flow without friction to reward the highest-returning and the best companies,” said Sen. “Many of the policies we saw and many of the actions we saw I’m sure led to better markets.”

To Quincy Krosby, chief market strategist at Prudential Financial, there are two obvious ways to see the president’s market impact. First, the rollback in regulations that had held back small and mid-sized businesses, and second, the tax cuts that brought corporate rates more in line with the rest of the developed world.

“It was thoroughly pro-business,” Krosby said by phone. “It did help the market.”

Though some say the tax reductions helped goose company buybacks and dividends in lieu of capital expenditures, share repurchases matter for companies’ earnings per-share, she said. Buybacks remain a hotly contested topic within many market circles, but if they helped push stocks higher, then the ripple effects will have been felt in pension funds and IRAs.

Craig Fehr, an investment strategist at Edward Jones, says there’s no denying some of the Trump administration’s policies -- again, the tax cuts and deregulation -- helped spur a sizable run for stocks. But in his view, a larger role was played by trends that would guide markets during any administration. In the postwar period, rarely have stocks declined over four-year presidential cycles, Fehr noted. Presidents, he says, are but one factor and don’t dictate markets over longer periods.

“Lower taxes for corporations, deregulation probably had some positive effect in the economy growing, but at the same time, the declining unemployment rates and healthier labor market -- which were probably going to take shape regardless -- was a much more powerful factor than simply some of the adjustments made by the Trump administration,” said Fehr. “In a $20 trillion economy like the U.S. economy, it’s much more of a battleship than a canoe -- it’s not going to turn at every wave.”

While Manulife Investment Management’s Thooft says it’s virtually impossible to link equity returns to the president alone, he also acknowledges corporate tax reform flowed directly through to companies’ earnings. He estimates that accounted for roughly half of stock returns under Trump, and helped extend the economic recovery and equity bull market.

“It was probably a tailwind to that, it’s just a question of magnitude,” said Thooft. “There’s no doubt that tax policies, perhaps some of the deregulation policies, did help feed sentiment and help feed equity returns. Arguably you could also point to the fact that the low levels of interest rates on top of these additional policy measures led to perhaps an expansion in what realistic valuations are these days.”

Randy Frederick’s been in the business for 30 years. He remembers clients asking him in the depths of the 2008 financial crisis if they should move into cash. Frederick, who’s vice president of trading and derivatives at Charles Schwab & Co., has gotten similar inquiries in recent days in regards to the election. His advice? “Your best bet is to just stay in,” he said. “If your time horizon is long enough, the market is always bullish.”

Frederick crunched the numbers on S&P 500 returns going back to 1932 and few instances show negative returns over four or eight-year terms.

“It’s very, very rare and yes, if you slice it down by each of the single years over a presidency, you might find a period of time when it was negative but you won’t find consistency across presidents,” he said.

He continued: “The reason for that is that what may have caused the markets to go down during that particular president’s first year or third year or whatever it was was probably something completely unrelated to that particular president,” he said. “Don’t base your investing decisions on the presidential cycle and don’t assume the market’s doing what it’s doing because of the president. It’s probably a coincidence. It may not have anything at all to do with it.”