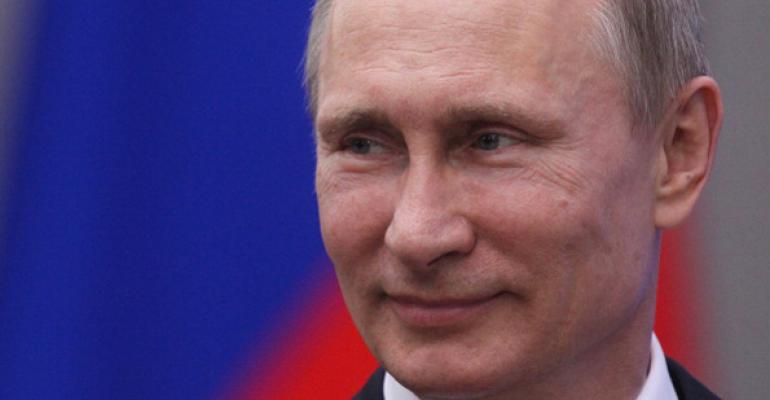 Is Russia Cold or Hot?

Fund managers say the Russian stock market is among the cheapest in the world, but the stocks of Putin’s country are only suitable for clients with strong stomachs.

The Russian stock market has been as cold as Siberia. With Vladimir Putin menacing Ukraine, iShares MSCI Russia ETF (ERUS) lost 15.9 percent during the first two months of 2014, according to Morningstar. In contrast, the S&P 500 gained 1 percent. After the recent losses, Russian stocks now sell for a price-to-book ratio of 0.6, half the recent average for the country and well below the S&P 500’s figure of 2.8.

Is it time to do some bottom fishing? Some mutual fund managers think so. The Russian market is among the cheapest in the world, they say. That is true enough, but the stocks of Putin’s country are only suitable for clients with strong stomachs. Even if the West does not intensify sanctions, the outlook is gloomy. Russian investors have been fleeing the country, shifting their money overseas. Foreigners are reluctant to provide capital at a time when expanded military actions could unsettle markets. If the sanctions are increased—as many in Congress advocate—then key Russian blue chips could suffer, and the economy might slip into recession.

“This is not a time to put a lot of money into Russia because the governance situation is opaque,” says Will Riley, portfolio manager of Guinness Atkinson Global Energy (GAGEX).

Clients who want to stick a toe into the icy Russian waters should consider diversified funds that have small positions in the country. A solid choice is Brandes Emerging Markets (BEMAX). Diehard contrarians, the Brandes portfolio managers love to shop in troubled economies. They scooped up depressed Thai shares in 2009 after a military coup unnerved investors. As the Arab Spring unfolded in 2011, the managers sought bargains in the Middle East. Most often the approach has worked. During the past three years, Brandes has outdone two thirds of emerging markets peers.

These days the Brandes managers have 11.2 percent of the fund’s assets in Russia, almost double the figure for the benchmark, the MSCI Emerging Markets Index. “The Russian market is trading for about four times forward earnings,” says portfolio manager Louis Lau. “We haven’t seen that kind of valuation since the global financial crisis.”

Among the cheapest stocks in Russia are the energy blue chips. Many of these oil and gas companies have long been unloved because they are owned by the government or heavily influenced by Moscow. While the energy business has been profitable, the shares have proved unpredictable when the regime made erratic moves. Moscow has been known to jail executives or dip into corporate cash hordes to fund other projects.

While Riley of Guinness Atkinson is wary of most Russian shares, he does hold one deeply depressed stock, Gazprom (OGZPY), a giant gas producer. During the years before the financial crisis, the Russian energy business boomed as global demand increased, and the Gazprom shares commanded a price-to-earnings multiple of 8. Now Riley says the multiple on 2014 earnings is 2.5, compared to figures of 12 to 16 for U.S. companies. Riley does not expect that Gazprom will soon trade at the same level as Exxon Mobil (XOM). But he says that the shares can rebound back to their old average levels. “The company will remain profitable because Europe will be dependent on Russian gas imports for some time to come,” he says.

To hold a bigger stake in Russia, consider US Global Investors Emerging Europe (EUROX). The fund’s benchmark has 55 percent of assets in Russia. With storm clouds on the horizon last year, US Global lowered its Russia allocation to 40 percent. Since then portfolio manager John Derrick has continued trimming stocks of government-controlled banks and energy companies. Instead, Derrick has been shifting to growing companies that are owned by private shareholders—not the government. A holding is Yandex (YNDX), which is sometimes called the Russian Google. Besides operating a search engine, the company also provides email and map services. Sales are growing steadily as more Russians come online. “This is a quality company with high returns on equity,” says Derrick.

While all kinds of Russian stocks have sunk, small caps suffered particularly severe damage. During the past year, Market Vectors Russia Small Cap ETF (RSXJ) fell 21.7 percent. In a few cases, some very high-quality companies were punished unfairly, says Andrey Kutuzov, portfolio manager of Wasatch Emerging Markets Small Cap (WAEMX). Kutuzov only takes companies with strong balance sheets, high returns on equity, and the ability to grow consistently. A holding is O’Key Group (OKEY), a leading operator of hypermarkets, giant grocery outlets. The company has grown rapidly by catering to upper-middle class consumers. “This is one of the best merchandisers in Russia with loyal customers and a strong brand,” says Kutuzov.

When Russian stocks sank, shares in Ukraine and some Eastern European countries also suffered. Portfolio managers have little interest in Ukraine because the market is so small. But they see opportunities in rising countries such as Czech Republic, Poland and Lithuania. With their low labor costs, the stronger Eastern European countries have emerged as growing manufacturing centers. Many German companies have moved production facilities to Poland and other countries where goods can be shipped easily to Western Europe. Even if exports to Russia slow, Poland should continue to thrive. The government estimates that GDP will grow 3 percent this year. “Poland’s main export market is the European Union, not Russia,” says Peter Kohli, chief investment officer of DMS Funds, which operates mutual funds that specialize in Eastern Europe.

As the European Union begins growing again, Poland should also prosper, says John Derrick of US Global Investors. He recommends PKO Bank Polski (PSZKY), the biggest bank in Poland. “If there is a broad-based expansion, then the big Polish banks will do well,” he says.