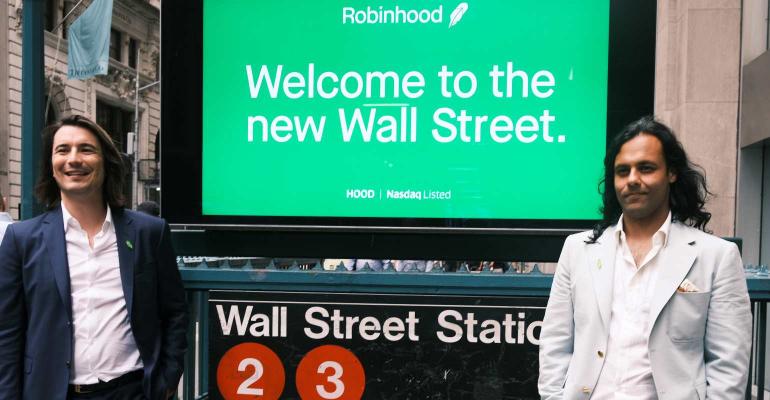 Robinhood Fails to Get Much Love From Retail Investors at Debut

Retail investors net bought shares worth $18.9 million in the zero-fee trading platform on its listing day, far less than the IPOs of other high-profile firms.

(Bloomberg) -- Robinhood Markets Inc. suffered a lukewarm reception at its stock market debut from individual investors, the very group of customers courted by the popular trading app for long-term growth.

Retail investors net bought shares worth $18.9 million in the zero-fee trading platform on its listing day, according to data from Vanda Securities Pte. That pales before those of initial public offerings from other high-profile firms such as Chinese ride-hailing giant Didi Global Inc. and the world’s top cryptocurrency exchange Coinbase Global Inc.

Related: Robinhood Banks on Its Traders’ Allegiance in IPO Like No Other

Didi attracted $69 million from amateur investors on its first day of trading, with Coinbase bagging $57.4 million.

The lack of enthusiasm from retail investors was a key factor contributing to Robinhood’s disappointing debut Thursday, when its shares ended 8.4% below its initial public offering price. It also underscores how quickly sentiment can shift toward such online brokerages that seek to democratize financial markets by attracting a new generation of amateur and young investors.

Despite the absence of support among retail investors, the company received some high-profile support from Cathie Wood’s flagship ARK Innovation exchange-traded fund, which purchased almost 1.3 million Robinhood shares Thursday, At Robinhood’s closing price of $34.82, that gives the ETF a more than $45 million stake.