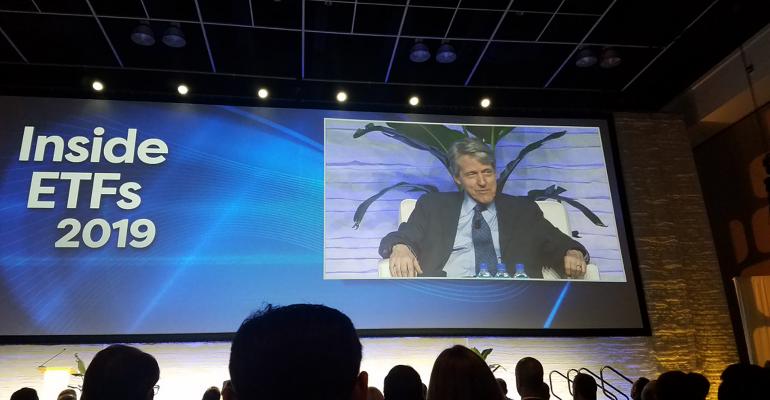 Robert Shiller at the 2019 Inside ETFs conference
Investment>Equities

Robert Shiller at Inside ETFs: Probability of Recession Is Rising

The Nobel laureate economist and Yale professor proclaims that "all good things come to an end" at the Inside ETFs conference.

If the economic expansion lasts through next month, it will be the longest recovery since 1857, when the National Bureau of Economic Research’s business cycle data begins. And, of course, all good things come to an end.

“It seems like there has to be an elevated possibility of recession this year or next,” Shiller told the Inside ETFs conference in Hollywood, Fla. “There are signs of people worrying.”

The fact that by some measures stocks are going through their longest bull market in history (almost 11 years) and that home prices are in the midst of their third-longest increase in history also raises concern, the Yale professor said. “There’s a feeling this ought to end soon, and that it [the economy] can’t keep going up.”

Still there’s a chance that the economy will escape recession this year, he said.

As for the stock market, Shiller’s cyclically adjusted price-earnings ratio, which takes into account the past 10 years of earnings, stands at 29.9, compared with the average of 16.6 going back to 1881. “That doesn’t mean you should expect negative returns, but it means returns will likely be lower than usual over the next 10 years,” he said.

Shiller also discussed the importance of narratives in the economy and financial markets, the subject of his next book.

“Economics is behind most social sciences in using narratives,” he said. “What drives the economy is substantially stories.” The Great Depression of the 1930s is a prominent example. “It’s on everyone’s mind,” Shiller said. “Everyone was talking about it during 2007-08,” when the financial crisis transpired.

And what about the present? “Part of the narrative driving the U.S. now is Donald Trump,” Shiller said. “Whether you like him or not, you are interested in him. That’s driving the economy and stock market.”

There is a downside to the Trump phenomenon, he noted. “Unfortunately, this isn’t a stable situation. There could be a major correction.”

The narrative in the middle of last year focused on the longest bull stock market ever, Shiller said. “That itself encourages people to doubt that it will continue going on.”

The excitement was illustrated by the fact that the sculpture of a bull near Wall Street became more popular than the Statue of Liberty, Shiller said. “We’re so proud to have the strongest stock market in the world. That’s all good when it’s going up. When it goes down, the narrative will change.”

Part of what is driving the stock market upward is that people are worried about their incomes and want to invest in technology stocks “or something glamorous for the future,” Shiller said. “People still have patriotism, believing in our economy and superiority.”

It’s not all about narrative—fundamentals count too, he pointed out. “There’s a new regime, with artificial intelligence sowing huge uncertainty as to what the economy is doing. There could be spectacular growth, or it could create social unrest and inequality.”