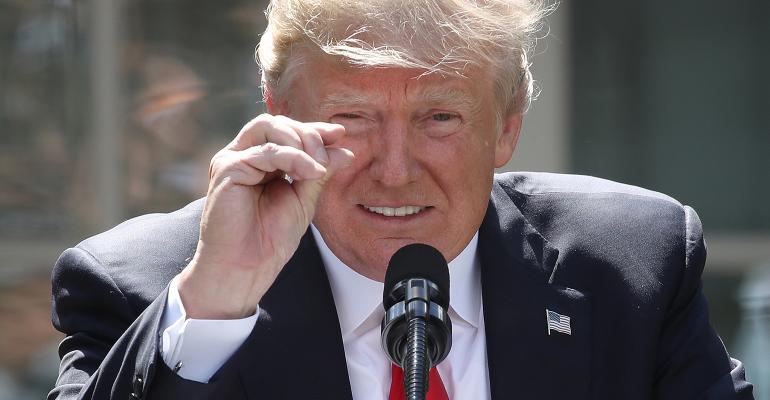 The drama surrounding the administration should not necessarily send investors running for cover.

While positive sentiment around the president’s pro-business agenda may be receding, the drama surrounding the administration should not necessarily send investors running for cover.

Generally, whenever a new administration takes office, the markets experience three distinct phases. First, there is the initial reaction to the new president and their proposed policy agenda. This phase, often the quickest, then transitions into speculation around the new president’s priorities and postulations about which initiatives are likely to carry broad legislative support. Finally — at least in most cases — the last phase is characterized by emerging clarity around how these policies will affect corporate America, global events and the economy at large. However, as has been the case during and after President Trump’s successful run for office, the traditional playbook doesn’t always apply.

For instance, many observers have been surprised by the run up in equities immediately following the election. That initial surge, in large part, was driven by what was termed a reflation trade in which the market absorbed both positive economic data and speculation around policy developments, such as promises for tax reform and increased infrastructure spending. Coupled together, the improving economic picture and potential for added stimulus suggested the low-inflation, low-growth environment would reverse course.

Since then, while the market has been left wanting for positive news from the White House, equities have largely maintained a fixed trajectory higher. If anything, the steady cadence of sensational stories and tweets emanating from the White House and Mar-a-Lago has desensitized investors and inured market participants from all but the most damning narratives. Enter the abrupt firing of FBI director James Comey, a puzzling meeting with Russia’s foreign minister (in which the president spontaneously revealed top-secret intel) and revelations, reportedly documented in a memo, in which the president urged the former FBI director to end an investigation into ex-security advisor, Michael Flynn. The latest news about Jared Kushner’s efforts to establish a back-channel communications link with Russia only further serves to distract the administration from pushing forward its policy agenda.

At a point when the markets should be entering the discussed third phase — and just as the markets did, in fact, seem to be gaining clarity around health care and tax reform — the president’s agenda is now quickly being swallowed up by emerging ambiguity instead. Although, in a way, the only thing that has really changed is that the latest news cycle has roused the markets out of a slumber in which investors were content to overlook the absence of any positive news from the administration. Despite the politics, a sturdy economic baseline remains positive and intact.

Consider the still-firming economic picture. Unemployment is declining, household spending is rising and businesses are again investing in growth. While equity investors will often bemoan rate hikes, the Fed’s “normalization” of its interest rate policy — marked by two increases over the past 12 months — reflects growing optimism around the economy. May’s industrial production reading marked the strongest monthly gain in manufacturing in over three years, while the unemployment rate fell to 4.4 percent, its lowest level since May 2007.

The global geopolitical picture has also crystallized. The election of Mark Rutte as Prime Minister of the Netherlands in March and Emmanuel Macron’s win as president of France in the first week of May provided some comfort to global markets. Each easily beat rival populist candidates — Geert Wilders and Marine Le Pen, respectively — which likely helped avert financial market unrest.

Finally, as most investors well know, earnings drive equities. After seven straight quarters in which S&P 500 companies were in the red, we’ve now witnessed three straight quarters of growth. According to Factset, 75 percent of the S&P 500 companies that have reported first-quarter earnings beat analyst estimates. Average year-over-year earnings growth, residing at 13.9 percent, is on pace for the highest quarterly growth rate in over five years.

The S&P 500’s forward-looking 12-month price-to-earnings ratio, at 19.15 as of May 30, may look rich against its five- and ten-year averages — likely reflecting a sustained Trump premium that remains in place. In the absence of policy adoption, which could become a chronic issue as priorities change, the premium could certainly be at risk, a fact that probably has some market watchers worried. A worst-case scenario, for instance, in which the entire “Trump premium” is wiped out, would equate to an approximately $900 billion to $1.1 trillion selloff versus the status quo in which existing expectations remain priced into the market.

When the year began, we underscored for investors the careful balance of what was an “unstable” market equilibrium. Even amid the sugar high following Trump’s election, we stressed that the positive market fundamentals, expected “legislative alignment” and anticipated pro-business policies could be easily offset by geopolitical risks and a departure from executive branch “norms.”

As of mid-May, with the August recess looming in Washington, we remain optimistic that the improving economic picture and corporate growth will continue to buttress equities even as the policy agenda gets murkier by the day. The S&P 500 is showing a total return above 6 percent, the equity markets will likely have legs as long as the economy and company fundamentals show continued strength. The enveloping uncertainty around the status of the Trump premium, however, will ensure that investors remain on their toes.

Peter Andersen is the Chief Investment Officer of Boston-based Fiduciary Trust Company. Further insights and perspectives can be found here.