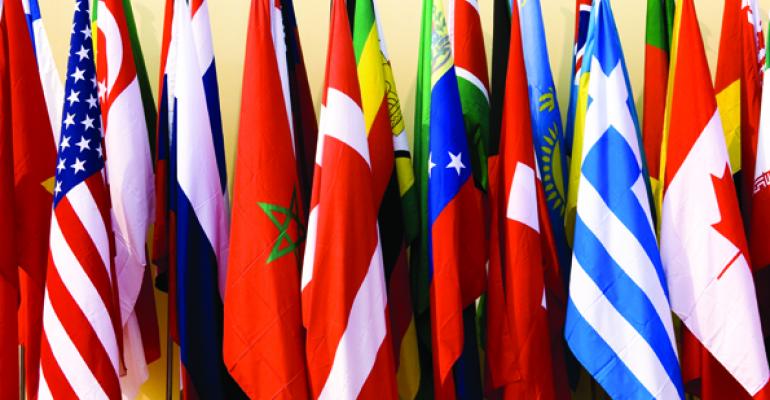 This guide takes a look at three strategies built to help investors pursue their financial goals while increasing their international exposure.

For the first time since 2007, the world’s major economies are growing in sync with all 45 countries tracked by the Organization for Economic Cooperation and Development. However, in our opinion, nowhere is that more apparent than in the United States, which has been driven by continued and increased consumer spending. This has propelled market capitalizations to even higher levels for U.S. equities with U.S. stocks nearing the top of their historical range.

We believe that earnings across Europe, Australasia, and Western Asia are still well below their prior cycle high, which is generally tied to the delayed economic cycle across Europe, where earnings are still roughly 40 percent below their prior peak. In many advanced economies, the after effects of the financial crisis are finally fading. Long-troubled Eurozone economies, even Greece, show signs of finally turning a corner.

After several years of big political surprises such as Brexit, investors appear to be feeling an increasing confidence in the global landscape. We believe many investors have turned more favorable to investment outside of the U.S. due to a variety of factors, including the diminished prospects for significant legislative progress for both tax and healthcare reform here in the U.S.

Our research shows that the world is benefiting by a reversal from the global commodity bust that began in 2014. Such new approaches to expanding energy supply, such as fracking here in the U.S., initially caused prices to tumble. We believe that prices have firmed overall and investment continues to pick up. Yet broader inflation is low worldwide, which may provide central bankers an incentive to proceed slowly in pulling back a variety of stimuli implemented since 2008.

For investors, valuation is not everything, but it is not a bad place to begin. The price-earnings ratio is the ratio for valuing a company that measures its current share price relative to its per-share earnings. The price-earnings ratio can be calculated as: Market Value per Share / Earnings per Share. The chart below shows trailing P/E ratios for the U.S., Developed Countries and Emerging Market Countries through the S&P 500 index, MSCI EAFA index and the MSCI Emerging Markets indices, respectively, since Aug 2007. We believe, however, even in the face of this earnings growth that investors in international dividend stocks must be delighted that the dividend being paid is sustainable over the long term, meaning that the payout is well-covered and the payer company has the potential to grow it over time. Measuring a company’s core financial health makes it possible to evaluate the likelihood of future dividends increasing or decreasing. With this approach, the reliance on publicly available financial data means new dividend payers can be evaluated similarly to stocks that have paid dividends for decades.

Strategy No. 2: Tilting Towards Emerging Markets

Our analysis shows that when investors decide to invest internationally, they usually do so through large-cap companies. We believe by tilting the portfolio to the mid- and small-cap international companies, an investor could reap potential diversification and total return benefits.

Recent U.S. equity market research showed small-cap stocks have historically outperformed large caps across long periods of time, even when controlling for beta, which is a measure of the volatility. Research also demonstrated there is a value effect on performance. Stocks with favorable valuations—meaning low P/E ratios or high dividend yields—tended to outperform those with unfavorable ratios, again, even after controlling for beta  or systematic risk of a security or a portfolio in comparison to the market as a whole. Later studies proved that the value and size factors may also explain differences in returns for equities in international markets.

Strategy No. 3: A Global Opportunity for a Reversion to the Historical Mean

Natural resources provide the potential advantage of offsetting some of the longer-term inflationary effects of economic expansion.

As China, India and other emerging markets move toward more developed economies, population growth, urbanization and rising incomes all fuel an increase in infrastructure spending, as well as basic commodities. The need for energy, food products, metals and other natural resources such as paper and water are the building blocks of flourishing economies. As non-U.S. economies gain economic share, U.S. investors in natural resources can participate in the benefits of rising prices of raw input materials, and we believe help to alleviate exposure to U.S.-denominated investments while potentially offsetting inflation.

Marie Dzanis is the Head of Intermediary Distribution at FlexShares.