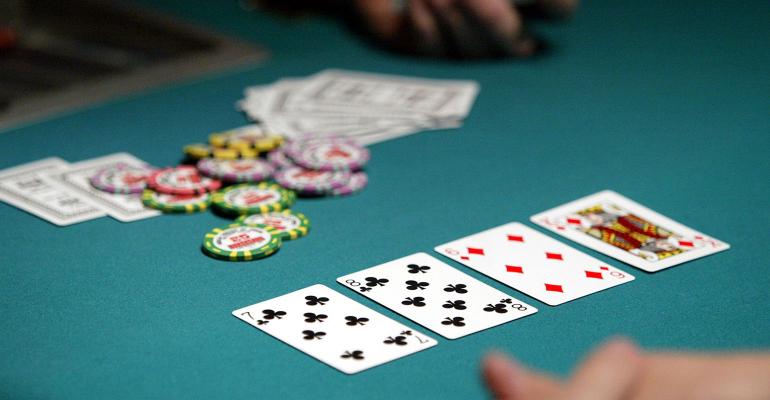 A writer explores how playing cards taught her to discipline her thinking and focus more on process than outcomes.

(Bloomberg Opinion) -- When “Moneyball” by Michael Lewis was published in 2003, it quickly gained a big following on Wall Street. The book is ostensibly about baseball, but it’s really about how to seek out value in places others aren’t looking.

“There are all these biases that infect the human mind in making intuitive value judgments,” he said in one interview. The protagonist of “Moneyball,” Oakland A’s general manager Billy Beane, takes advantage of those biases by using a data-driven methodology to find good players that traditional baseball executives tend to overlook. As a result, the A’s have fielded competitive teams despite having far less money to spend on players than other franchises.

You didn’t have to be Warren Buffett to see how the lessons of “Moneyball” apply to investing. The book’s implicit but easy-to-see message is that the most successful investors — such as Buffett — usually have a way of finding value that most investors miss. Successful investing virtually requires that skill.

Maria Konnikova’s terrific new book, “The Biggest Bluff,” is, to my mind, the new “Moneyball.” Its subject is ostensibly poker. Konnikova, 36, is a writer with a doctorate in psychology, and she decided she wanted to learn to play poker to explore the interplay between luck and skill. There are few exercises as ready-made for such an exploration as the most popular of poker games, Texas Hold ’em.

What prompted her adventure, she writes, was reading “Theory of Games and Economic Behavior” by John von Neumann and Oskar Morgenstern, the book that essentially created modern game theory. Konnikova was taken aback upon learning that this seminal book about strategy was largely inspired by poker. Von Neumann, a brilliant mathematician and strategist, believed that poker represented, in Konnikova’s words, “that ineffable balance between skill and chance that governs life.” She adds:

“If he could figure out how to disentangle the chance from the skill, how to maximize the role of the latter and learn to minimize the malice of the former, he believed he would hold the solution to some of life’s greatest decision challenges.”

Spoiler alert: Over the course of the year and a half the book spans, Konnikova goes from being a rank novice who doesn’t know a straight from a flush to an accomplished pro who gets to final tables in tournaments — sometimes winning — and makes serious money ($350,000 and counting she told an interviewer). She even had a sponsor for a time.

How does she do it? First, she finds the perfect teacher in Erik Seidel, a poker legend who’s a kind of Delphic presence in the book. He tends to guide her toward knowledge rather than imposing it, so that her poker breakthroughs feel like her own discoveries at least as much as his teachings.

Second, she goes all-in, devoting herself fully to the task at hand, even though there are many discouraging moments along the way — moments when her lack of poker smarts allow better players (usually men) to goad her into making mistakes.

And third — and this is the part that truly grabbed me — she learns a mode of thought that is vital to winning poker. This is where “The Biggest Bluff” intersects with “Moneyball.” What Konnikova has to say about thinking can also be applied to investing. “It’s all about thinking well,” Seidel tells her during one of their first meetings. “The real question is can good thinking and hard work get you there?”

In one of her few direct references to stock picking, she quotes the Nobel laureate Daniel Kahneman: “For a large majority of fund managers, the selection of stocks is more like rolling dice than like playing poker.” He continues:

The successful funds in any given year are mostly lucky; they have a good roll of the dice. There is general agreement among researchers that nearly all stock pickers, whether they know it or not — and few of them do — are playing a game of chance.”

Konnikova’s first lesson — and it’s a painful one — is that she’s going to need to lose to get better. “The benefit of failure is an objectivity that success simply can’t offer,” she writes. “If you win right away — if your first foray into any new area is a runaway success — you’ll have absolutely no idea to gauge if you’re really just that brilliant or it was a total fluke and you got incredibly lucky.”

Lesson No. 2: How do you react to losing? She quotes Dan Harrington, the author of several widely read poker strategy books: “Everyone plays well when they’re winning. But can you control yourself when you’re losing? And not by being too conservative, but trying to still be objective as to what your chances are in the hand. If you can do that, then you’ve conquered the game.”

And so it goes: A good poker player has to be comfortable with uncertainty — just like a good investor. She has to have a good reason for every single decision she makes. She has to be able to acknowledge mistakes — and adjust accordingly. She has to be able to shut out all the white noise while searching for meaningful patterns. She can’t get too high when she wins a big pot or too low when she’s on a losing streak. A player who is self-aware enough to clearly see her own strengths and weakness has a big advantage. All of these attributes are important for good investing as well.

Konnikova stresses the importance of not dwelling on bad luck — those times when you have a good hand that you played correctly but lost because your opponent got lucky when the last card was turned over. What matters is whether your decision was sound.

At one point, when she is complaining about a hand she lost, Seidel tells he doesn’t want to hear the result of her hands anymore. He just wants to hear her explain her decision-making. “When you’re telling me hands, don’t even say how it ended,” he says. “I want you to do your best to forget how it ended yourself. That won’t help you.”

“Poker taught me not to be focused on the outcome, but on the process,” Konnikova told me when we spoke a few days ago. “And that has been liberating in everyday life. It feels nice to wallow when things go wrong. Give me some sympathy! Poker just knocked that out of me. You are just wasting valuable emotional resources. It serves no purpose.”

More than just about anything, Konnikova learns how to take emotions out of her decision-making. That may be the single most important thing Seidel and several other mentors taught her.

What surprised me the most is the idea that you can be taught to think in a less emotional, more rigorous way. You don’t see many adults changing their thought process — and I asked Konnikova if it were really possible on a wide scale. After all, not everyone has a doctorate in psychology like she does or undertakes a task they will fail if they don’t learn to think differently.

Yes, she replied, she was convinced that modes of thought could be taught. “My graduate adviser was Walter Mischel,” she said. Mischel was a psychologist who conducted one of the world’s most famous experiments: the marshmallow test.

That’s the delayed gratification test in which children were put in a room with a treat (often but not always a marshmallow), which they could either eat right away or hold off, knowing their reward for doing so will be a second marshmallow. The marshmallow tests were conducted in the 1960s, and Mischel then followed the subjects for decades afterward. He found that those who were able to hold off eating the first marshmallow fared better in life than those who lacked that self-control.

“There were actually two other fascinating trajectories that no one talks about,” Konnikova said. “There were children who couldn’t wait to eat the marshmallow, but learned self-control later in life. And there were some who did wait for the second marshmallow but whose self-control ended up deteriorating.”

Guess what? Those who were taught self-control had the same life outcomes as those who had that mindset at the start and never lost it. “A lot of these skills can be taught,” she said “And the same is true of critical thinking.”

Maybe it’s time for investors to start learning how to play poker.

To contact the author of this story:
Joe Nocera at [email protected]