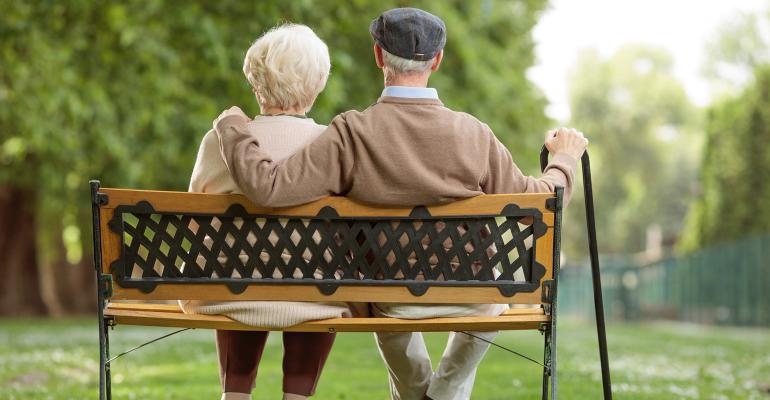 Outliving Your Income Is Optional

As clients near retirement after a nine-year bull run, looking to rebalance an equity-heavy portfolio could be stymied by potential tax hits and less-than-ideal opportunities in fixed income. That’s one reason more advisors are looking at options strategies.

The resurgence of volatility has forced advisors to revisit certain client portfolios that may have enjoyed a nice run in equities but now find themselves overweight. In order to help avoid massive downswings and reduce risk, advisors may feel that now is a pertinent time to rebalance portfolios to ensure client assets last in retirement.

With 10,000 baby boomers retiring each day and having less time to recover from devastating investment hits as they once had, rebalancing portfolios into an appropriate risk profile has become a critically important topic. To this point, Morningstar notes that a 60-percent equity, 40-percent bond split, back in March 2009, would now be well over 80 percent in equities, and the client nine years older.

Despite this, researchers at The American College and Texas Tech University have found that workers nearing retirement are heavily influenced by recency bias—a critical reason why so few undergo the process of strategically shifting assets to more appropriate allocations.

The problem compounds itself as one considers rising interest rates dampening the appeal of fixed-income alternatives, as well as the taxes affiliated with selling and reallocating into the supposedly safer, smoother asset classes.

These are just a few of the reasons advisors and wealth managers should take a closer look at options strategies.

As noted by the Options Clearing Corporation, there has been an uptick in interest among investors in option strategies, and the first quarter of 2018 was the highest quarter on record for options contract volume. The OCC also points out that volume has increased not just from institutions but also from wealth managers.

Wealth managers are using options to assist clients with:

A relatively straightforward strategy involves selling covered calls or the ability to earn income on positions already owned. Just as a landlord would look to earn passive income from an occupied property rather than having it sit empty, so too can an investor essentially “rent” an equity position while awaiting a target price. To carry the analogy further, income is generated from the tenants as the value of the underlying asset (in this case the building) appreciates. So it’s also true with covered calls and their underlying investments.

For example, consider a wealth manager—at the direction of the client—bought shares of XYZ Corporation at $50. Intending to hold the position for a defined period of time (maybe three months) with a target strike price of $60, they would expect an upwardly trending market to deliver a 20 percent return.

A healthy profit, to be sure, but selling a $60 call option against the XYZ position would generate additional premium (rental income) for the client, while lowering the original cost basis.

Of course, the client is obligated to sell the underlying investment if the price rises above $60, limiting upside potential, and a healthy understanding of where the price is headed should dictate any decision. Yet, when appropriate, selling a covered call can increase returns while reducing costs to provide additional (passive) income.

Taking risk down an additional level from writing covered calls, a collar simply means using the call premium generated from the above call selling to purchase insurance against a stock or the market’s decline in the form of put options. By combining selling calls with purchased puts, clients can reduce the risk in their portfolios by up to 70 percent, adding a cap to their potential upside and downside over discrete periods of time.

For clients seeking to live off the income generated by their portfolios, but de-risk without triggering a meaningful capital gains bill, adding a collar to some or all of their holdings may be a solution.

Consider similar retirement portfolios, one for Harry and one for Sally. Both have $1 million upon retirement at aged 65, the exact same withdrawal amounts and intervals and investments with equal 30-year rates of return. They had a history of longevity in their families, and both lived to aged 95. So how did Sally have over $1.3 million on her 95th birthday, while Harry found himself penniless?

Sally’s advisor focused on risk reduction during this period of withdrawal; Harry’s did not. One way this can be achieved is through a covered call writing program over Sally’s portfolio.

Because Harry lacked the supplemental income that Sally enjoyed from her option premiums, Harry had to sell more shares during periods of drawdown in order to pay his daily living expenses. So, when markets rebounded, he had fewer shares from which to profit.

With the same long-term returns as Harry, but less volatility, Sally wasn’t forced to sell as many shares to fund her lifestyle. Because of that, she had more shares, and more appreciation, when the markets rebounded.