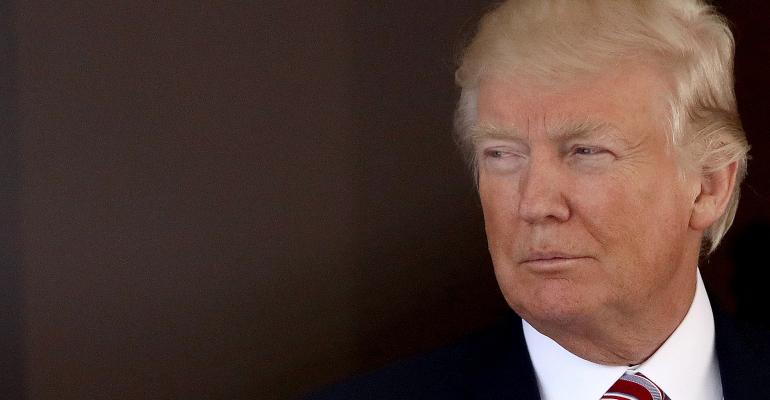 The Only Question Investors Have Is About Trump

The man in the White House can't be ignored. But some perspective helps.

(Bloomberg View) --In my day job, I manage assets for high net-worth individuals and I make a point of getting out and visiting my clients as much as I can. Since the election in November, they have been asking me the same question, or some variation of: What does Trump mean for my investments?

Here are the most common questions, and my answers:

No. 1. How will Trump affect the economy and the stock market?

We start with an overlooked truth: Presidents, regardless of party, get too much credit for when things go right and too much blame when they go wrong.

The president is but one part of the government, which accounts for less than a quarter of the economy, though obviously it has a huge impact on markets and the broader economy through foreign policy, regulations, tax policy and spending.

Yes, Donald Trump can and will affect the economy and the markets. But we should not put all of our focus on the marginal impact of the president while giving short shrift to more important things such as corporate revenue and earnings, the Federal Reserve, interest rates, inflation, congressional spending, employment, retail sales, Supreme Court decisions, and, of course, valuations.

Like all presidents, if he does good things it will be supportive of the markets; if he commits major errors -- such as starting a trade war or gets the U.S. into a serious shooting war -- it will be detrimental.

No. 2. Why is the market rallying when some predicted stocks would fall if Trump were elected?

One explanation for the market’s post-election enthusiasm for Trump was based on expectations of tax reform, tax cuts, infrastructure spending and deregulation. However, that was a post-hoc narrative. The simple fact that markets in Germany, France and Japan rose more than in the U.S. since the election suggests that something else is at work.

My explanation is that the global recovery from the financial crisis continues apace, slowly repairing and rebuilding from that event. If you insist on singling out an explanation for why global markets are rising, look no further than the robust recovery in corporate earnings, especially in Europe.

As for forecasts of a Trump crash, that -- like most others -- was simply wrong.

No. 3. How can you say politics doesn’t matter to markets?

Let me be precise: Politics can and occasionally does matter to markets -- just much less than many people assume.

If I told you the president was going to be impeached, and the markets will continue to power higher for a few years, you might think I was batty. But that is what happened when Bill Clinton was impeached in 1998. The next year, the Standard & Poor’s 500 Index rose more than 21 percent, and the Nasdaq Composite Index gained more than 85 percent. Yes, it would all end badly the next year, but the impeachment was irrelevant to the dot-com bubble popping.

So too was the accusation that President Barack Obama was a Kenyan-born Marxist who was hell-bent on “Killing the Dow.” When he left office earlier this year, the Dow was about 15,000 points higher than the day he took office.

And when President George W. Bush introduced unfunded tax cuts, all I heard were complaints that the deficit would balloon, inflation would soar, and jobs would be wiped out. Two of those three things never happened, and the market rose 94 percent.

If you let your political ideology get in the way of your investing decisions, the results are never pretty.

No. 4. The Trump news flow is overwhelming. What should we do?

I think we all hoped that once the election was over, we could go back to our normal lives without the incessant parade of campaign news.

Investors need a way to sequester the noisy news flow out of the White House. It is too easy to let the relentless and disturbing headlines throw off long-term financial plans. Investors must read the news, but not let it interfere with thinking clearly.

Look, let’s be honest about the commander-in-chief: He is the world’s leading Twitter troll, a man whose main goal is to interrupt your thinking, misquote and insult other people, engage in rhetorical sleight of hand, and impugn the integrity of those trying to do honest work. What all trolls want is a reaction, something Trump has achieved to great success.

Rule No. 1 on the internet is “Do not feed the trolls.” No one can really ignore the president of the United States, but it’s probably best to view much of what he says or tweets as minor background noise.

Yes, as a citizen I do worry about the president’s rampant prevarications and the degraded culture he has created.

The search for facts and reliable information is the bedrock of modern civilization and well-functioning markets. Agnotology is dangerous and worrisome. I have no interest in returning to the dark ages before the Enlightenment. However, that seems to be the direction in which we’re headed, and some people seem to think it will make them the most money.

They likely won’t, and now more than ever, truth remains the best disinfectant.