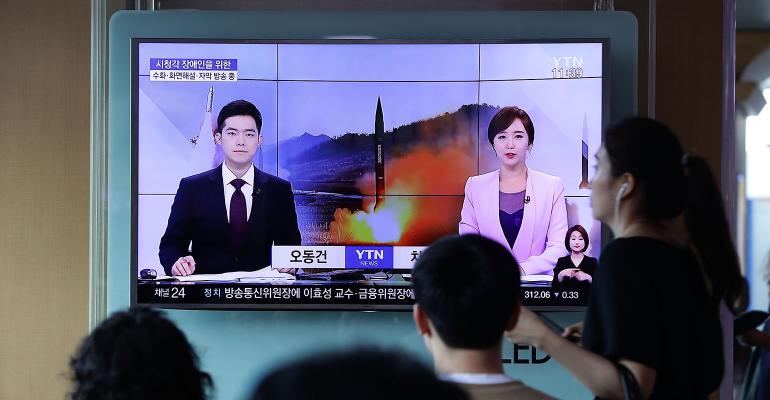 North Korea and the Markets: Should We Be Worried?

Risks are rising, but the threat is not immediate.

It is clear that the developing situation between the U.S. and North Korea is rattling financial markets. Should we be worried? If so, what should we do?

Let’s start with the actual geopolitical situation, where the U.S. and North Korea are hitting a breaking point. The U.S. cannot accept North Korea's having the ability to strike the mainland with nuclear weapons. But possessing nuclear weapons was not a breaking point. Nor was experimenting with missiles. Marrying the two together—along with having the capability to strike Los Angeles and other U.S. cities—is. For the U.S. to accept this would be to place itself under permanent threat and would destroy a great deal of its military credibility.

Why should this be, when China, Russia and others already have nukes? What makes North Korea different? The answer is that, for various reasons, North Korea has cultivated a reputation as ferocious, unpredictable and borderline crazy. You might not mind the older, quiet gentleman next door who shoots as a hobby, for example. But a neighbor who fires a gun through his front windows is much less acceptable. Whether North Korea is actually that crazy is debatable—but the U.S. cannot take the chance.

So, a confrontation is indeed looming. But President Trump’s recent comments suggested the U.S. is much closer to that trigger point than had been assumed.

In point of fact, we are probably not that close yet. Senior government officials have been dialing back the implications of Trump’s comments, suggesting that the situation has not changed nearly as much as markets feared. The chances are high that after a short-lived pullback, markets will recover. We have seen this before, most recently in April, when the market tanked after a U.S. missile strike in Syria, only to recover rapidly.

Of course, this scenario is only true if we don’t see any military action. Indeed, military action is unlikely in the short term, suggesting worry is overdone at the moment. But it is actually very possible in the medium term. Unless North Korea backs off, it is almost certain. This is something we certainly need to keep an eye on. Regardless of whether North Korea has functioning nuclear missiles yet, it is certainly working on them, and the U.S. will need to respond.

The effects of war on the markets

What if there is a war on the Korean peninsula? The direct impact on the U.S. economy and markets would likely be limited, just as the direct impact of the wars in Iraq and Afghanistan has been limited. U.S. military action in Asia would not directly affect U.S. companies or corporate earnings—or hurt the economy.

The indirect effects, however, could be dramatic and substantial. South Korea, which would bear the brunt of the damage in any conflict, is a major trading and manufacturing hub. As such, disruption there would break supply chains around the world. Depending on the degree of damage, that disruption could last for months or years. Beyond those effects, the radical rise in uncertainty would also affect financial markets, with investors backing off and de-risking, which could drive markets down even further. Clearly, there are real reasons to try to avoid a war.

The effects, however, would be even worse for North Korea, especially its government. If the U.S. does decide to act, it will almost certainly go for full regime change so as to solve the problem once and for all. The U.S. certainly has the power to do just that and, as noted above, would have every incentive if the North Koreans develop working nuclear missiles.

A change of strategy?

The thing that everyone knows is this: All parties, including the North Koreans, have substantial incentives to once again cut a deal rather than fight. Based on past crises, there will be a great deal of theater, only to end in some kind of deal. This is by far the most likely outcome, and one I suspect the markets will come back to expecting fairly shortly.

Unfortunately, however, as the North Koreans get closer to the U.S. red line, this strategy is becoming less doable and is subject to much more risk due to mistakes by either side. This strategy has worked for decades for North Korea, and it may be figuring it will work again. The U.S. has always been willing to step back and defer the problem, but it is now quite close to having its back to the wall. The U.S. may, in the next year or so, be unable to step back any more and be forced to launch an attack—even knowing all of the costs and consequences. If so, however, it will likely be a long-term process, rather than a sudden development, and will certainly not be keyed off of unscripted remarks.

The most likely outcome

The takeaway for now is that although risks are rising, they are not immediate. The market’s reaction is overdone for the moment. That said, we do need to keep an eye on this situation, as it really could be different this time. Even then, however, the most likely outcome is that—one more time—both countries choose to talk rather than fight.

Keep calm and carry on.