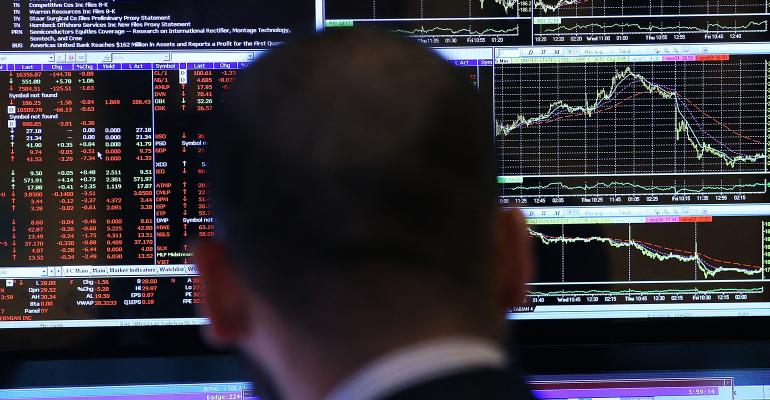 No, Five Stocks Are Not Exerting Any Unusual Influence on Market

What’s happening now is virtually always the case in a market where success is never evenly spread.

(Bloomberg) --Here’s another way to describe the stock market’s dependence on a handful of companies driving gains in 2017: What always happens.

Much has been made about how rallies of 25 percent or more in megacaps like Amazon.com Inc. and Apple Inc. are propping up the S&P 500 Index and leaving it at the brink of a record. But a closer analysis shows that what’s happening now is virtually always the case in a market where success is never evenly spread.

If anything, this year’s lopsidedness is less pronounced. Removing the top five contributors to the S&P 500’s advance in 2017 would pare its year-to-date return by 1.5 percentage points, according to data compiled by Bloomberg and S&P Dow Jones Indices. That’s less than the average 1.8-point reduction that happens if you cut the top five each year since 2009. That returns are often splayed like this was illustrated 16 months ago in an essay titled “Situation Normal, All Fanged Up,” by fund manager Cliff Asness. The AQR Capital Management founder noted that despite breathlessness over the FANG block’s run that year, subtracting the impact of the four biggest contributors from the S&P 500 in 2015 curbed its return by almost exactly what it would in any other year.

At the same time, while it may be common for a small cohort of stocks to exert such influence, be careful before calling it “normal.” At least two studies in the last two years have posited that a lopsided distribution of returns in the S&P 500, the tendency for just a couple high-flyers to run away from the rest of the market, is the thing that makes it so hard for active manager to beat the indexers.

“Those papers really make you think about what you want to do as a manager -- how many stocks you hold, and really think about which companies could re-rate to be one of the biggest winners,” Jason Benowitz, a portfolio manager at Roosevelt Investment Group Inc., said by phone.

Indeed, dark clouds were gathering for stock pickers as early as February, when Apple shares started taking off, at various points posting gains whose impact on the index were almost four times greater than any other company. An analysis in late February shows that among 300 funds benchmarked to the S&P 500 with at least $500 million, only a fifth held Apple more than its representation in the index, according to latest regulatory filings compiled by Bloomberg.

Other aspects of the market’s contour in 2017 bode less badly for stock-pickers. A version of the S&P 500 that strips out market-value biases and gives every constituent the same weight is up 5.6 percent year to date, about 1.1 percentage points behind the regular gauge. More than 3 percentage points separated them in 2016.

One conclusion is that share-price gains within the broader market are tracking more closely with those in the top tier.

At the same time, measures of variation within the market have turned more favorably to active managers this year. A Bloomberg Index tracking three-month correlation between the moves of S&P 500 constituents fell to the lowest in five years in January. While the gauge jumped last month, it remains lower than at any point since 2014.

“This is the nature of the impact of the best performers that we see historically,” Anu Ganti, a director in Standard & Poor’s index investment strategy group, said by phone. “What we’ve been seeing in the world as things are increasingly indicized is that if you’re an active manager it’s going to be harder to outperform unless you have that extra value add and skill.”