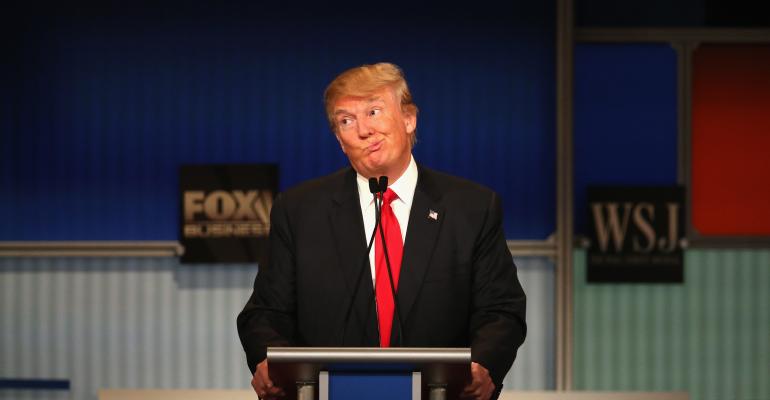 (Bloomberg) --The election’s over, but for equity investors it’s the same old bull market, one the new president might prefer die a quick death.

Donald Trump inherits a 2,826-day-old rally in U.S. stocks that has defied history, overcoming anemic economic growth and a 15-month earnings recession that pushed valuations to a seven-year high. Squeezing out even a couple more years would be a feat of unprecedented longevity, with August 2018 looming as the month the advance will exceed all that came before.

Maybe it’ll keep going forever -- it’s already 32 months longer than the average advance since the 1930s. But if it doesn’t, a new president’s best hope often is that equity pain hits fast. Just ask Barack Obama and George W. Bush. Lucky timing on market cycles has been a blessing for three straight presidents, helping them enjoy powerful advances by their second term.

“Any incumbent president wants to get a bear market over early,” said Jim McDonald, the chief investment strategist at Chicago-based Northern Trust Corp., which oversees $875 billion. “Not that they can always control that, but there’s a strong relationship between the performance of the stock market in the year of the election and whether the incumbent party gets elected.”

Linking stocks to past patterns may seem simplistic, but it represents a big chunk of the bull case for stocks, considering the market’s historical habit of going up often seems like the lone force propelling it nowadays. Besides motionless earnings, investors are coping with the start of a Federal Reserve tightening cycle and the weakest economic recovery since World War II.

Stocks Stamina
Fatigue was on few minds last week as the S&P 500 powered to its biggest gain in two years, first on Hillary Clinton’s improving odds, then on speculation Trump’s fiscal policies will reinvigorate profits. Banks and health-care stocks had their best stretches since 2009 amid expectations of looser regulatory scrutiny, while small-cap shares have gained six straight days.

At the same time, early stock market verdicts on a new administration are notoriously unreliable, and in the end there’s little to suggest a president can do much to affect the market either way. A study by Leuthold Weeden Capital Management LLC found that equity returns are almost identical under Republicans and Democrats since 1928.

Predictions that time alone is enough to halt a rally have crashed and burned for three straight years. Among arguments for continuation, stocks just seem to have more stamina nowadays, with two of the three longest advances coming in the past 30 years. The last five are, on average, 800 days longer than the five before them.

Optimists also say the length of this advance is misleading because even though sentiment has been plenty resilient, it’s never reached the euphoria that marked tops like the one just before Bush’s first term. Yes, valuations are high, but the best year for this bull market would’ve been average during the late 1990s advance, and even that rally didn’t end until the economy started to contract.

Earnings Momentum
“There hasn’t been enough growth to create excesses that would traditionally lead you into the next recession,” Hank Smith, who helps manage more than $6 billion as chief investment officer at Haverford Trust Co. in Radnor, Pennsylvania, said by phone. “The odds of a recession are low, and part of the reason, in a perverse way, is that we’ve had such a weak economic expansion.”

Earnings recently turned higher, a sign of momentum that has historically proven hard to reverse. Among the nine instances since 1936 when companies emerged from an extended streak of profit declines, stocks posted gains in all but two. The S&P 500 rose an average 12 percent over the following year.

And the start of a new administration is often a bullish time for equities. Since the 1928 presidential race, the S&P 500 has rallied an average of 5.1 percent in the first full year after an election, Bloomberg data show. That includes gains of at least 23 percent in 2009 and 2013, following the two most recent votes.

Bush Comparison
“There are no alarm bells going off right now, but something will eventually come along and jolt the economy in a negative way,” said Tom Anderson, chief investment officer for Boston Private Wealth, which oversees $7 billion. “Bull markets don’t just die solely from old age. There’s always some sort of contributing factor.”

A relevant comparison for the incoming president could be 2000, when George W. Bush entered office following a decade-long rally that by Inauguration Day was giving strong evidence of its own mortality. Stocks fell more than 40 percent in the first 22 months of Bush’s first term, failing to find a bottom until a year after the Sept. 11 terror attacks.

For Bush, that actually was good timing. By Election Day 2004, the S&P 500 had posted gains in 15 of the preceding 19 months, rising 10 percent in the year before the Republican was returned to office. For Obama, the index was up 13 percent in the 12 months before he won a second term in 2012.

Of course, the reason market cycles are important is their sensitivity to the economy. When a rally ends, history suggests an economic recession will follow within a year. The five-year bull market that began in 2002 saw the U.S. economy fall into an 18-month recession in December 2007 amid the worst financial crisis since the 1930s.

Wobbly Economy
The economy is already showing signs of wobbling. Citigroup Inc.’s U.S. Economic Surprise Index is back in negative territory and has been since the last week of October after hitting an almost two-year high in July. While the latest payroll data showed an increase from the prior month, it still missed economist forecasts. Further, workers have been in short supply for 13 straight months, according to the Institute for Supply Management survey of service-industry companies, which make up almost 90 percent of the economy.

“The market will anticipate a recession and head down well before an official recession is called,” Crit Thomas, global market strategist at Touchstone Advisors of Cincinnati, which oversees $15 billion, said by phone.