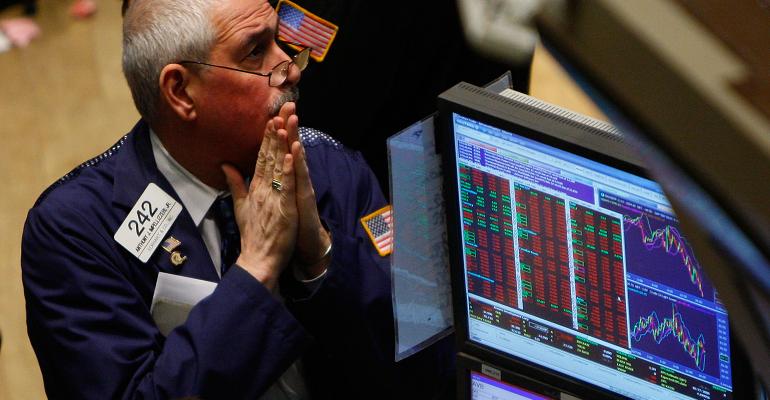 (Bloomberg) -- One selling point of a newfangled investment strategy that has swept Wall Street is diversification through factors: buy stocks with high dividends, and your results will vary from those chosen for price momentum. But what if that benefit broke down?

Something like that is happening in the stock market right now, according to researchers at Sanford C. Bernstein & Co., who found that correlations among investment factors have shot to all-time highs. Swings in groups of stocks sorted by traits such as valuation or momentum are mimicking each other in size, the New York-based investment firm found.

While not the easiest concept to digest, lookalike price trends in disparate collections of shares may up the pressure on anyone trying to put factors to work as a way of spreading out risk or beating benchmarks. Analysts at Evercore ISI found that stocks chosen according to price momentum are showing up in groups categorized by weak finances at three times the historical average.

It’s also a potential headache for fund managers preparing to feast in a market where unified moves among individual stocks are finally loosening up. Bernstein’s research digs a little deeper to find that correlation, the enemy of active funds because it makes picking winners harder, persists at an almost hidden level where quantitative managers operate.

“Investors should view this as telling them that the market is in fact heavily influenced by macro variables at present, but that common macro driver is being felt by a high degree of co-movement between the groups of stocks that make up factors rather than all stocks happening to move together,” wrote Inigo Fraser-Jenkins, head of quantitative and European equity strategy, in a note to clients.

While the findings have implications for owners of smart-beta exchange-traded funds, Bernstein’s research focused on a more technical flavor of factor investing, long-short portfolios tuned to earnings or price characteristics like value or volatility. Their composition minimizes the influence of market moves and helps explain how correlations can rise among groups while they’re falling among individual shares.

It’s a lens into the new order of things, where sponsors of smart-beta ETFs and anyone else using factors in their investment strategy have carved the market up into distinct collections of stocks united by a factor. Bernstein’s research suggests macro shocks like Brexit or central-bank action are -- for reasons that aren’t altogether clear -- playing out of late in long-short portfolios rather than individual stocks.

Just how tough is it to find factors that move independently? Correlation among them currently sits at an all-time high, 23 basis points above the 16-year average, data from Bernstein show. Looking at individual stocks would give you a different idea. By August, a CBOE index that measures the expected correlations between returns of stocks in the S&P 500 fell to the lowest level since 2014, meaning shares were charting unique paths.

While the exact cause is hard to pinpoint, in the past factor correlation has tended to rise in periods of macro stress, according to Joseph Mezrich, managing director at Nomura Securities International Inc. That linkages are tightening now is a sign investors are paying more attention to global threats than is apparent in a market where the CBOE Volatility Index is trading near a historic low.

“It’s stress points when you see things become more correlated,” Mezrich said by phone. “We’ve been going through this in the market, starting when oil began to collapse in January. There’s now a pretty tight linkage between credit risk and equity behavior.”

Correlation between two popular investment factors, price momentum, or stocks that are rising the fastest, and quality, or those with earnings and balance sheet strength, tells part of the tale. Since 1993, the average correlation is a positive 5 percent, but at the moment, the two have a negative correlation of 18 percent, data from Evercore show. Low equity volatility is likely to blame for the switch, according Abhra Banerji, the director of quantitative research at Evercore ISI.

“A low-vol environment encourages folks to favor low earnings quality names due to their risk-on characteristics,” he said. “If this low quality outperformance lasts for a long enough period of time, these stocks start to become the high-momentum stocks.”

A side effect has been an environment where making factor bets through smart-beta ETFs can result in high levels of style infection if you’re not careful. Taking a large bet on growth may also give you a large exposure to quality, for example. Such results are borne out in funds like the iShares Russell 1000 Growth ETF, which has identical exposures to factors that measure both growth and the quality-related factor of profitability, according to a Bloomberg PORT U.S. equity model.

“Portfolios are no longer diversified and fundamentals are not driving this process,” said Nomura’s Mezrich. “Factor investing has always become more known in periods of stress, but now in particular it’s becoming more important.”