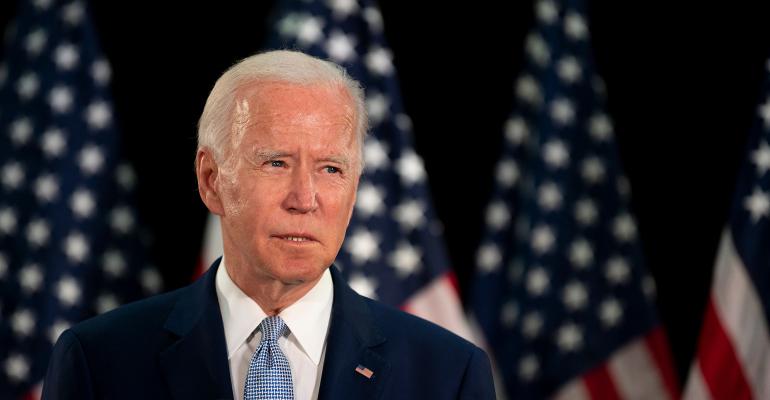 The resurgence in U.S. stocks from their Covid-19 crisis low in March, along with Biden’s recent strong polling numbers, have revived investor interest in the November election.

(Bloomberg) -- Some on Wall Street may be starting to get nervous about the idea of a Joe Biden presidency, but such fears may be misplaced, according to a veteran Washington advisory group.

“There is no question that in the short-term investors prefer GOP victories,” the Scowcroft Group’s Tom Gallagher and Kevin Nealer, who each have followed policymaking in the U.S. capital for decades, wrote in a recent note. Even so, “history says investors shouldn’t be nervous” about a Biden victory, they wrote.

While it’s true that policies have an important impact on financial markets, what ultimately gets implemented won’t be clear on election day, they said. And investors need also to weigh the potential risks of a Trump win, which could include escalating trade tensions with Germany and the continuation of the current president’s “lack of capacity for crisis management,” they wrote.

The resurgence in U.S. stocks from their Covid-19 crisis low in March, along with Biden’s recent strong polling numbers, have revived investor interest in the November election. Goldman Sachs Group Inc. earlier this month laid out one scenario where changes to tax policy under Democratic leadership could cut earnings per share on the S&P 500 by 12% in 2021.

As the Goldman strategists also noted, a key brake on any full-blown progressive agenda will be the likely make-up of Congress, Gallagher and Nealer wrote. Even if the Democrats sweep the White House and both of the federal legislature’s bodies, a thin margin in the Senate could mean that little of a progressive agenda gets enacted, the Scowcroft analysts wrote.

As for regulation that doesn’t need congressional action, that may not prove so influential, according to Gallagher and Nealer.

“Market research showed no correlation between sectors that benefited from de-regulation by Trump and those sectors’ relative performance,” they wrote.

And on trade, Biden would likely act in a “less disruptive, more multilateral way” than the Trump administration has, they wrote. Investors ought as well to consider the risks of a withdrawal from the the World Trade Organization in a second Trump presidency, they wrote.

“Republicans are thought to be good for the supply side of the economy,” Gallagher and Nealer wrote. “In Trump’s case the effects of lower marginal tax rates and deregulation have to be netted against reduced immigration and higher trade barriers.”

To contact the reporter on this story:
Joanna Ossinger in Singapore at [email protected]

To contact the editors responsible for this story:
Christopher Anstey at [email protected]
Adam Haigh