/sites/all/themes/penton_subtheme_wealthmanagement/images/logos/footer.png
Recent
Recent
Thanks to Pandemic Puppies, CRE Investors Are Turning Their Attention to Veterinary Clinics
Aug 08, 2022
Seven Must Reads for the CRE Industry Today (Aug. 9, 2022)
Aug 08, 2022
KKR Sees ‘Golden’ Chance to Snap Up Risky Debt Amid Market Chaos
Aug 08, 2022
IRA Legacy Gifts Are Just Around the Corner
Aug 08, 2022
Featured
The 10 Best and 10 Worst States in Which to Retire in 2021
Jul 15, 2021
Poll: 15 Classic Books on Investing and the Markets
Apr 03, 2020
Fifteen Must-Listen Business Podcasts for Advisors
Aug 14, 2020
Celebrity Estates: Jay Leno and Planning for Classic Car Collections
Feb 22, 2022
Viewpoints
brought to you by 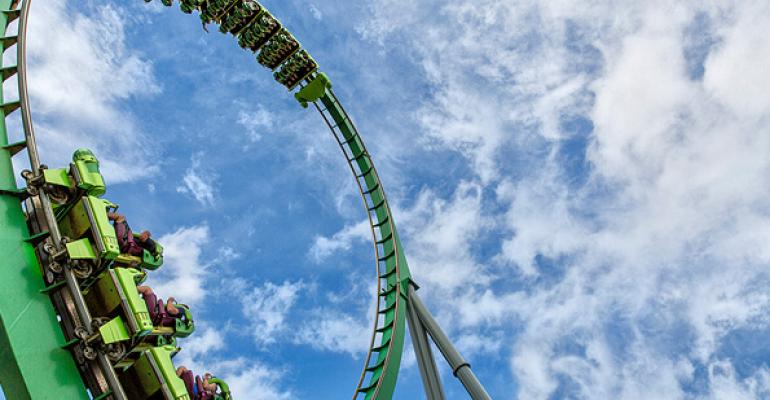 One can easily draw the parallel between a roller coaster ride and the risk we experience in equity markets.

Think about your very first time on a roller coaster, the memory of that moment the coaster cars slowly ascended toward their initial steep drop—only to embark on yet another, far more violent downward hurtle, directly after the first descent. You may also recall the “breather” (that seemingly calm space between each decline), when our minds eagerly, and quite inaccurately, “bank on” continued serenity. This is the best analogy I can come up with for a recent financial commentary that applies the physics concept of metastability to current risk in equity markets—or perception thereof.

Risk perception, for our matter, was in the “climbing” phase for quite some time—eerily anticipatory, and somewhat nonexistent when measured by the Volatility Index’s (VIX) lowest readings in history; in such a scenario, one conclusion can be drawn easily: equity market risk will increase. Recent spikes in the VIX—for example from May 8 to 17, when VIX rose from 9.77 to 15.59, a 60% increase—were analogous to merely the first roller coaster decline. Market participants are now enjoying the breather, trusting the calmness of markets, which are, strictly defined by our example, poised for more significant risk to come, with the second conclusion yet to be drawn. Historically, and generally speaking, average VIX levels have tended to increase prior to the most pronounced sell-offs (see chart), but we have not encountered volatility suppression as that which may be attributed to current central bank policies.

Given the above, the pressing questions remaining are when to expect rising volatility (and, hence, a corrective market), and what to do about it. At HighTower (HT), we believe in the value of sharing best practices and opinions, in self-declared absence of a binding house view, which is commonly found in traditional advisory firms. With this in mind, here are some interesting thoughts from my financial advisor partners:

David Bahnsen (HT Newport Beach) provided an interesting opinion piece on downside volatility, suggesting that the sharpest market drop for this year, at -2.8 percent, is of “cartoonishly silly” proportions, especially when viewed in light of the fact that, even with recessionary bear markets excluded, “normal downside volatility in a market calendar year sees 10 to 15 percent downside as a matter of regular course.” Yet David finds that even though current downside volatility readings have not been this low since 1995, it took several years after 1995 for markets to enter meaningful corrective “territory,” concluding that the “low volatility of 1995 did not mean a bear market in the years to come; rather, it meant an extension of the biggest bull market in human history.”

Our friend Adam Thurgood (HT Las Vegas) takes a different approach, having analyzed a 15-year history of strong correlations between the ratio of early-cyclical stock performance to the S&P 500, and the level of the S&P 500 15 months later. He finds that “over the past 15 months, early cyclicals have meaningfully underperformed the broader market, which sets the stage for the market to begin to correct in the not too distant future.” Yet Adam leads the conversation to a finer point: “Only time will tell if the relationship will hold, but the early cyclical metric reinforces the bond market’s angst and further supports the notion of having a defensive tilt…”

Among all differing approaches and opinions, which we love to share and debate, we remain united in our broader perspective: it cannot be an objective to time markets, but, instead, to stay disciplined with respect to portfolio construction and asset allocation. Clients are advised to establish and follow long-term stated objectives, as it is most important to achieve personal goals, not beat markets. Matthias Paul Kuhlmey is a partner and head of Global Investment Solutions (GIS) at HighTower Advisors. He serves as wealth manager to high-net-worth and ultra-high-net-worth individuals, family offices, and institutions. Follow him on Twitter @MoneyClipBlog.