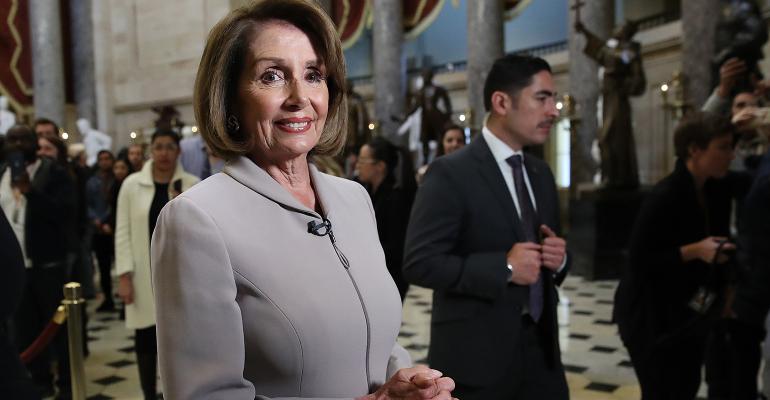 A long-overdue ethics reform would be a useful final step for outgoing House Speaker Nancy Pelosi.

(Bloomberg Opinion) -- As House Speaker Nancy Pelosi exits Democratic leadership after 20 years, there’s still work left to be done. One effort in particular could help restore public trust in Congress, eliminate a perennial source of perceived corruption — and perhaps remove a significant stain on the speaker’s own legacy.

By the very nature of their jobs, members of Congress have no business trading stocks. They may have access to classified or otherwise privileged information. They may know of pending legislation that could affect an industry’s bottom line. They may have oversight duties for the very companies they own shares of. Even if their portfolios simply fluctuate along with the market, there’s no escaping the appearance of a conflict when lawmakers moonlight as traders.

A decade ago, after a series of scandals, Congress determined that the best remedy for such conflicts was added transparency. The result was the so-called Stock Act, which requires legislators to report their trading activity and prohibits them from trading on nonpublic information uncovered during their official duties. Although penalties were nominally attached to the measure, not one lawmaker has ever been criminally sanctioned for breaking it. Violators usually get a $200 fine.

Not coincidentally, dubious behavior has continued. By one tally, 75 members of Congress and some 200 staffers have so far violated the law’s reporting rules. Another investigation found that, even among reported trades, there was a disturbing pattern: Between 2019 and 2021, at least 97 lawmakers, their spouses or their children bought or sold financial assets that presented conflicts of interest with their official duties, including work on oversight committees. Although legal, such conduct is hardly reassuring to constituents.

Other instances of abuse show just how ineffective the current system is.

In the early days of the pandemic, dozens of lawmakers — many of whom had access to closed-door meetings with top federal health and security officials — engaged in hundreds of trades over just a few months, many involving companies that were set to directly benefit from the crisis. Representative Tom Malinowski failed to disclose trading about $1 million in shares of tech and medical companies that had a stake in the pandemic response. (Malinowski has said his broker made the trades without his knowledge.) A House ethics probe into the matter is still underway.

Then there’s Pelosi herself. The speaker has long opposed calls for a trading ban. As it happens, her husband, Paul, has amassed a fortune partly through prolific stock-picking. One analysis found that between 2007 and 2020 the Pelosis made as much as $30.4 million from shares in big tech companies that Congress is supposed to be regulating and that could be subject to pending antitrust legislation. Again: all legal, and all problematic to anyone with common sense.

Public polling on this issue could hardly be clearer: A majority of voters of all parties support banning congressional stock trading. Various bipartisan bills for doing so have recently been circulating. Following months of resistance, Pelosi finally said she was on board last February. Senate Majority Leader Chuck Schumer also endorsed the idea. In September, both chambers appeared ready to vote on the matter — only to abruptly punt right before the midterms.

Now, with barely a month left in the current session, members of Congress should put their money where their mouths are. The simplest and most transparent solution is to ban lawmakers and their immediate families from holding stocks at all. Although that’s unlikely to fly, a requirement to put any investment assets in a blind trust for the duration of their time in office should be a no-brainer.

Advancing such a measure in the lame-duck session might offer Pelosi an appealing capstone for her time as speaker. It might also demonstrate that true leadership sometimes requires sacrifice.