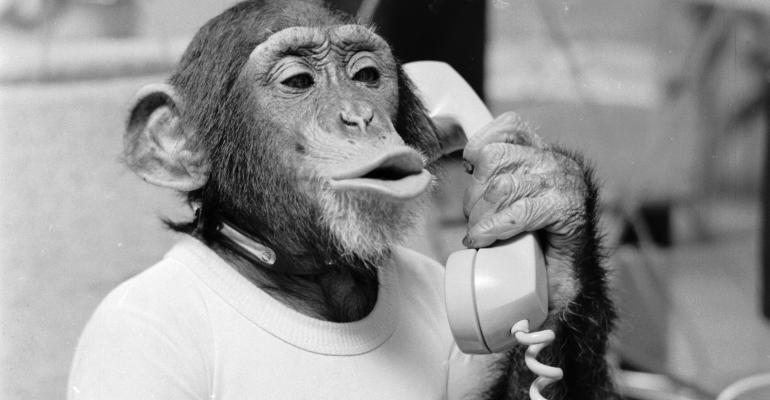 (Bloomberg) -- "A blindfolded monkey throwing darts at a newspaper's financial pages could select a portfolio that would do just as well as one carefully selected by experts," Burton Malkiel wrote in his 1 973 classic, 'A Random Walk Down Wall Street.'

The monkey's task would have been made even easier this year as the difference between various asset classes' returns has been pushed to the lowest in almost two decades, according to one simple measure of so-called performance dispersion.

The trend might be good news for sporting simians but it's bad news for professional investment managers who are paid to beat the general market or a broader index."These results show another tough year for asset allocation 'payback' as it marked yet another year in this cycle — the worst six years out of the 20 years are from this cycle — for those looking to get paid for picking the winning asset classes," said Glenn Reynolds and Nathan Wenger, analysts at CreditSights. "The running total return compression for calendar 2016 has a shot at being the worst yet."

Return compression has been a running theme in the aftermath of the financial crisis, with central banks around the world unleashing a tidal wave of accommodative monetary policy said to have helped indiscriminately push up asset prices, increase correlations across markets, and keep a lid on volatility.

This year's 14.6 percent differential comes about through a 14.8 percent jump in emerging market equities, the best-performer so far in 2016, minus a 0.2 percent return for short-term U.S. Treasury bills, the worst-performer. The year has the distinction of being the first since 2012 to record positive returns for all of the 17 asset classes tracked by CreditSights, with a broad rally in credit and other riskier assets coinciding with a jump in 'safe haven' sovereign debt.

That's an unusual trend for markets and one that's unlikely to persist forever, according to CreditSights."The monetary backdrop for this market (i.e. where all risks are rewarded) is not sustainable and there will be some more pronounced winners and losers ahead," the analysts conclude. "The yield curve or fundamentals will need to differentiate at some point this late in the economic cycle."