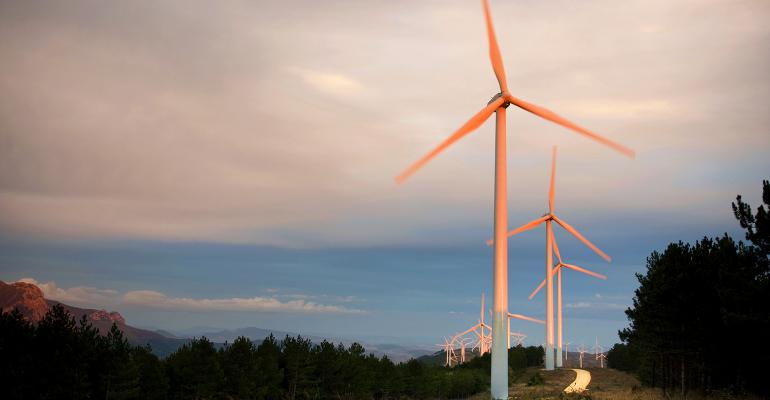 The stock performance of green companies shows that climate change is also a business opportunity.

(Bloomberg Opinion) -- The American companies most reliant on embracing green technology are outperforming every broad measure of the stock market, delivering a greater return last year than all but two (Russia and Greece) of the world’s 94 leading equity indexes.

These are the 92 publicly traded firms with at least 10% of their revenues derived from clean energy, energy efficiency or clean technology, according to data compiled by Bloomberg New Energy Finance. They're proving that the threat of climate change is also an investor's opportunity.

Not since 2013 has there been a year when the S&P 500 Index and Russell 3000 gained 31%. Yet this exceptional result didn’t come close to the performance of the clean companies, with their combined total return (income plus appreciation) of 40%. Together they were worth $946 billion last year, more than triple their market capitalization at the end of 2010. Whether the investment period is 2, 5 or 10 years, the return is superior by margins of 12%, 37% and 112% for clean companies.

The three biggest companies in this group by market capitalization all derived more than half their revenue from the clean-energy business. They are Nextera Energy Inc., the Juno Beach, Florida operator of commercial nuclear power units and provider of electricity through wind, solar and natural gas; Tesla Inc., the Palo Alto-based manufacturer of battery-powered, electric vehicles; and Universal Display Corp., the Ewing, New Jersey-based maker of organic light-emitting diode technology, according to data compiled by Bloomberg.

Utilities, energy and technology are the most prominent industries among the 92 companies meeting the BNEF criteria. The 19 energy firms in the group produced a 106% total return, 15 times the 7% gain by the overall energy-stock benchmark, the Russell 3000 energy sector. The nine technology companies among the 92 returned 70% when the Russell 3000 technology sector appreciated 46%, and the 16 BNEF-designated utilities earned 34% when the comparable Russell group advanced 26%, according to data compiled by Bloomberg.

Even U.S.-imposed tariffs on products from China, which manufactures a lot of clean-energy equipment, haven’t crimped the performance of the U.S. companies. Enphase Energy Inc., for example, moved its production to Mexico from China and the Petaluma, California-based maker of renewable energy equipment rallied 452% last year on revenue growth of 96%. Analyst estimates compiled by Bloomberg predict that Enphase sales will increase 26% and 27% annually through 2021.

By contrast, revenues for the 28 companies in the S&P Energy Index, a mostly fossil-fuel crowd, declined 5% in 2019 and are forecast to grow 4% in each of the next two years.

One investor who is bullish on clean companies happens to manage the most successful mutual fund in the U.S. last year, the Columbia Seligman Communication and Information Fund. The manager, Paul H. Wick, counted three of the cleaner companies among his winners: Advanced Energy Industries, Bloom Energy Corp. and Rambus Inc.

Wick said that Bloom Energy, for example, reduced the cost of its products “on a continuous basis over the last four or five years” and “as a result will be cheaper than grid power in quite a few jurisdictions, states in the U.S. and overseas.” His fund returned 54% (income plus appreciation) in 2019 and Bloom Energy rallied 144% in the final two months of the year after Wick acquired its shares.

Among the BNEF technology firms, Universal Display Corp., the New Jersey provider of power-saving lighting products, appreciated 121% as sales climbed 64% last year amid forecasts for 23% and 25% growth in 2020 and 2021. That's a superior outlook compared to the 70 tech companies in the S&P 500 Information Technology Index, which saw sales increase 10% in 2019 with 10% projected for 2020 and 8% for 2021, according to analysts’ estimates.

Renewable-energy utilities are similarly positioned for growth. Pattern Energy Group rallied 54% last year after the Canada Pension Plan Board agreed to acquire the San Francisco-based renewable power generation firm for $2.6 billion. Revenues increased 10% last year and are expected to rise 11% in 2020 and 3% in 2021, according to analyst estimates compiled by Bloomberg. The 28 companies in the S&P 500 Utility Index reported inferior sales growth of 6% last year and are likely to see only 3% in 2020 and 2% in 2021, according to the estimates.

Why would such staid pension stewards in Canada, where coal, gas and oil account for 77% of the nation's energy needs, embrace alternative energy? Because there is no additional investment risk. The average volatility, or price fluctuations, of the 92 clean-energy companies compared to everything in the Russell 3000 is about the same, according to data compiled by Bloomberg.

The healthiest investment is turning out to be among the most lucrative.

--With assistance from Shin Pei and Tom Lagerman.

To contact the author of this story:
Matthew A. Winkler at [email protected]