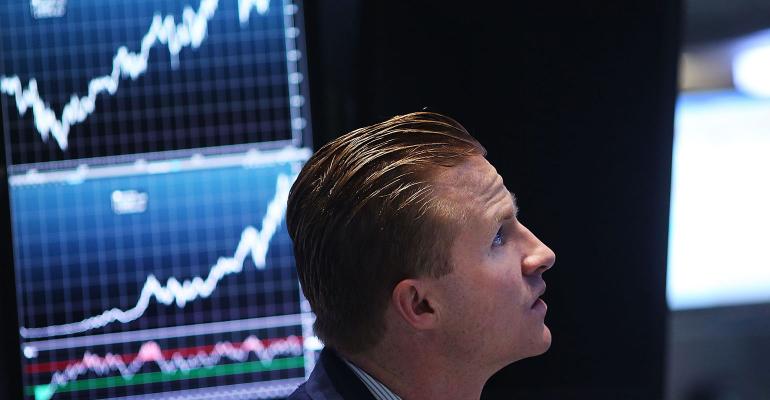 Inside the Record Stock Market, a Note of Skepticism on Economy

Growth, not value stocks are leading the rally.

Hardly a day goes by without another record. The S&P 500 Index has closed at an all-time high 16 times in 2017, its 7 percent advance since New Year’s led by chipmakers and Internet companies with the fastest earnings growth.

Growth stocks leading a rally -- who could complain? Market economists, for one. To them, lopsided success in the companies for which expansion is coming easiest usually denotes anxiety that the economy’s bounty isn’t being equally shared. They’d rather see cheap and unloved stocks doing well, a sign growth is spreading.

At the moment, that’s not the case. Value shares, those trading at lower multiples to earnings and asset value, are lagging behind their faster-growing peers by the most since 2009. The cohort, mostly financial firms and energy producers, lost ground as oil fell toward $45 a barrel and details of the president’s growth agenda remained few. “The shift to growth stocks tends to come when growth in the broad economy is more in question,” Bruce McCain, chief investment strategist at Key Private Bank in Cleveland, said by phone. “We need something more to keep the acceleration going, and the question is about whether Washington will be able to do that.”

Growth is leading the way in 2017 by a long shot. The S&P 500 Growth Index is up 11 percent, compared with a gain of less than 3 percent for the value counterpart. The gap is the biggest since the final months of the last recession.

With gross domestic product expanding at the slowest rate in three years during the first quarter and uncertainty looming on President Donald Trump’s promises to cut taxes and boost public spending, investors are embracing the fastest-growing companies, namely technology.

The Nasdaq 100 Index has climbed 17 percent this year as money flows to computer and software makers, an industry that’s forecast to boost earnings at a rate that’s almost double the S&P 500. Apple Inc., whose planned new line of iPhones has prompted analyst upgrades, is solidifying its status as the world’s most valuable company, with market capitalization topping $800 billion.

The search for growth is also reviving the FANG block of Facebook Inc., Amazon.com Inc., Netflix Inc. and Google parent Alphabet Inc. The quartet, which trailed the market last year for the first time since Facebook’s initial share sale in 2012, is back in vogue, surging 27 percent since January.