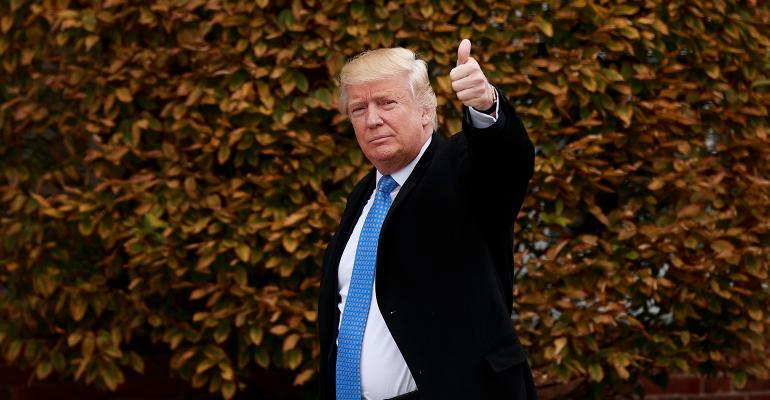 How Trump Has Changed the Outlook for 2017

Everything is awesome? The markets think so.

(Bloomberg View) --U.S. President-elect Donald Trump has given the world ample reason for concern about what the new year might look like. So far, though, financial markets appear to be assuming that everything will be awesome.

Pretty much everywhere you look -- stocks, interest rates, credit derivatives -- markets see a rosier picture for 2017 than they did in early November. While much has happened since then, Trump's election was by far the biggest surprise, suggesting that it's a major driver of the shift.

Consider, for example, the market for interest-rate futures, where traders have been trying to guess which economies will grow fast enough to justify an increase in rates. As of Friday, they were betting that the three-month U.S. dollar deposit rate would rise to 1.6 percent by December 2017. That's up about a half percentage point from early November, reflecting expectations that stronger U.S. growth will prompt the U.S. Federal Reserve to act. Here's a comparison with other parts of the world: Confidence in the financial health of corporate America appears to have risen as well. As of Friday, the cost of five-year default insurance on $10 million in debt issued by investment-grade U.S. companies stood at $68,000, down a bit from about $76,000 in early November. Much of the rest of the world also saw declines. The exception was Asia, where a strengthening dollar could weigh on companies that have borrowed heavily in the U.S. currency. Here's a chart: So why the optimism? Are members of the investing class, giddy over the prospects of income-tax cuts and deregulation in a Trump presidency, simply projecting the potential improvement in their personal circumstances on the broader economy? Or is there a more rational explanation?

Actually, there is. Trump has promised a major fiscal stimulus, including investment in infrastructure, that the Organization for Economic Cooperation and Development estimates might add 0.4 percentage point to U.S. economic growth in 2017 (and more than 0.8 percentage point in 2018). Together with the corporate-tax cuts that the president-elect has also proposed, this could improve corporate profits, justifying higher stock prices and lower default-insurance costs.

That said, much depends on the execution. Trump's plans remain sketchy, and could go terribly wrong in myriad ways. Right now, markets seem to be placing a very low probability on such an undesirable outcome -- at least in the short term. If they prove wrong, 2017 might be a very interesting year indeed.

Mark Whitehouse writes editorials on global economics and finance for Bloomberg View. He covered economics for the Wall Street Journal and served as deputy bureau chief in London. He was previously the founding managing editor of Vedomosti, a Russian-language business daily.